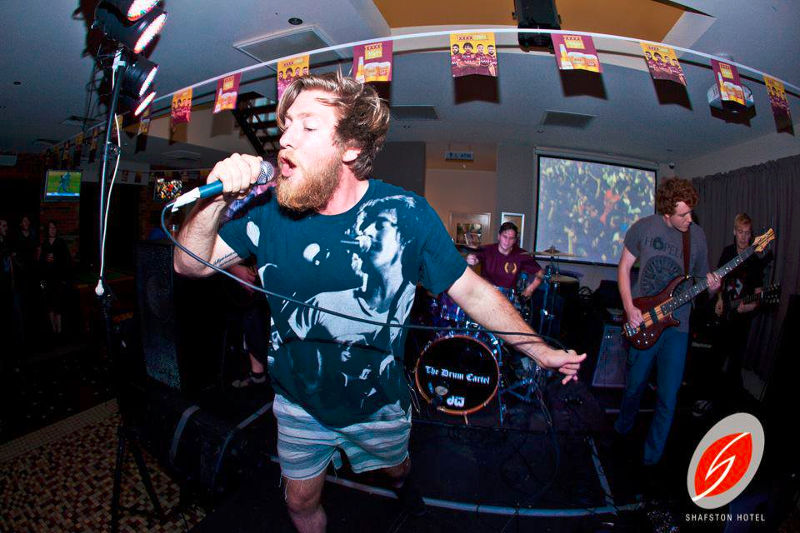 El Monstro from Brisbane (Australia) release on 21. August there new EP „Within„. AWAY FROM LIFE give an exclusive EP-Stream of the 6 song included EP. El Monstro also answers some questions in an interview about their new release and the band plans.

AFL: Hey there! How are you? Firstly thank you for taking time for an interview. Can you short introduce EL MONSTRO? Since when do you make music together? How many members you are and so on?

EM: Sure. El Monstro have been playing together since 2012. It was the drunken idea of Dan (Vox), Will (Bass) and Jordan (Drums) on Will’s birthday. I (Locky, Guitar) was his housemate at the time and so we started jamming.

In hindsight, it was a pretty weird thing. The music we were writing wasn’t you’re typical hardcore. There were way more influences and styles going into the writing then what you’d expect. It was definitely a learning process, as we had never really met as a whole before. Jordan, Will and Dan knew each other from their years together at high school and I was some weird older guy. But eventually we got to know each other’s writing styles and personalities. Three years later we’re older and more battle wary but still alive and kicking with our new second guitarist, Rhian, who joined after Parthenia was recorded.

AFL: Which bands and music do you count to your influences and how would you describe you music? Which three words fit best to EL MONSTRO?

EM: Ha! There are way too many influences to list all together. But I will try a brief one.

I think it’s obvious that we take influence from bands like La Dispute, Defeater, Break Even, Pianos Become The Teeth, A Lot Like Birds, and Bane. But there’s also a LOT of doomy / ambient stuff like My Dying Bride, Hope Drone, Deafheaven, Cardinal, Explosions in the Sky. Outside of that there is awesome acoustic music like Dave Matthews Band, Damien Rice and Newton Faulkner that some of us get into.

As far as three words to sum El Monstro, I’ll give you six – “Awesome-Riffy-Emo-Post Hardcore, Man.”

AFL: You will release your new record Within on 21th August. How satisfied you are with the album, how the EP differs from your debut EP Parthenia and what can the listeners expect on it?

EM: We’re really happy with how it turned out. We worked with a local producer and engineer, Doug Clarke, who did an amazing job. An El Monstro record is never going to be a transparent listen or easy to access at first because we don’t write in that way. So Doug had a really tough job when it came to this EP and he handled it brilliantly!

Within is far more of a conceptual record compared to Parthenia, as the subject manner is pretty heady. So the need was there to create a beginning, middle and end. We used a single musical theme played in one form or another over the record. That ends up introducing in the very dark and hectic ending in the last track, Fairweather.

By contrast, Parthenia was very much a collection of hardcore / metal songs strung together by a very loose narrative.

AFL: Where does EL MONTRO usually get its inspiration for new song and which themes you’re treaded in Within?

EM: It depends on whats going on around us at the time. Within was our first real journey into a deeply personal subject manner, outside of the song Caprica (which is the first song from Parthenia). So taking influence from life, I suppose, is a big thing for us. Within is about Dan’s loss of a family member through suicide and how that changed his perspective. The themes of acceptance, forgiveness, and personal improvement are what fuel the record, both lyrically and musically.

AFL: Do you have any plans coming to Europe the next times?

EM: A tour to Europe is would be awesome. Some of us have had some very wild nights in Frankfurt so it’s something we want to experience as a group. In the mean time we need to tour our home a bit more.

EM: Aside from the bands I mentioned before, we definitely love hearing new local bands from our home town. Bands like Feast, Blind Girls, Dr Parallax, Hope Drone, and Goon on the Rocks.

EM: Thanks for talking to us! We really hope you all enjoy Within. If you want to keep up with whats going on in the grand old land of El Monstro, you can find us on Facebook at www.facebook.com/elmonstroband.