AFL: Hey…now you have reached the half-time of your tour through Europe. How has it been so far?

AFL: You will also play some shows with the great Real McKenzies. Are you more looking forward to smash some balls with them or to drink with them?

ISOTOPES: We love smashing balls with the McKenzies. We usually get nice and liquored up first, then the balls come out.

AFL: The Real McKenzies come just like you from Vancouver. Do you already know each other?

ISOTOPES: Yeah we know them well. Half those guys have done time in the ‚Topes.

AFL: Your video of „Legend Of George Brett“  reminds me of “Waynes World”. Are you more fans of Wayne or Garth?

ISOTOPES: Well ya, it’s a blatant parody of Wayne’s World. Frankly, I’m not a fan of either Wayne or Garth; they don’t seem like the kind of guys you could count on for a clutch hit in a big spot.

AFL: There were also “some” changes in the line-up of The Isotopes. What are the reasons for this and who is currently playing?

ISOTOPES: If you want to be a working band you gotta have guys who can work. If a guy can’t commit he’s fucking replaced. It’s insane all these bands who let their fate be decided by the one guy in the band who doesn’t give a shit about it enough to quit his cock sucker job at the mall or whatever.

AFL: Baseball is a popular sport in Canada. In Germany it looks rather different. Have you ever played or are you still playing? Do you want to make baseball more popular in Germany?

ISOTOPES: I play baseball in East Vancouver. Eastvanbaseball.com. I don’t really care if baseball gets popular in Germany.

AFL: Your songs all refer to the theme of baseball.  Wouldn´t you prefer to sing about politics and drinking, sometimes?

ISOTOPES: If we were singing songs about drinking or politics I highly suspect we wouldn’t have ever got anyone’s attention and it’s almost certain we’d never have had the opportunity to do all the cool things we’ve done like put out records and tour the world. You gotta give people something to remember you by. And the same old rehashed bullshit about drinking or politics isn’t gonna cut it in most cases.

AFL: Do you have any rituals before you go to the stage?

AFL: You´ve just released your new album “1994 World Series Champions”, which I like very well. Was 1994 a special year or what does the title mean? It was also the year when “Punk In Drublic” or “Stranger Than Fiction” came out.

ISOTOPES: 1994 was the player strike year in Major League Baseball, and thus, there was no World Series. We consider ourselves pretty clever guys and I’ve yet to hear a compelling argument to the contrary. As for Punk In Drublic or Stranger Than Fiction – I’m more in the Dookie and How To Make Enemies And Irritate People camp. 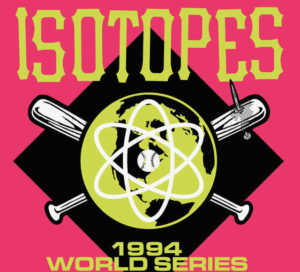 AFL: The album just lasts twenty minutes for ten songs. How long does the perfect punkrock song lasts for you?

ISOTOPES: There’s perfect songs of all lengths. My mantra in songwriting is keep them short and keep them sweet. I’m always trying to come up with new ways to eliminate redundant parts of a song. As for our album, 9 songs would have been my preference but our label wanted 10 or more.

AFL: Who occupies the most important position in The Isotopes?

ISOTOPES: I’m responsible for 99% of our creative output. I write the songs and do all the artwork. When it comes to hitting the road like I said earlier you need a committed group of guys, so in that regard we are all equally vital to the functionality of the band while we are on tour. And we have a large support system through our labels, Destiny and Stomp, our booking agency Muttis Booking, and our families, without all of whom, the Isotopes might have ended years ago.

Interview with THE BABOON SHOW