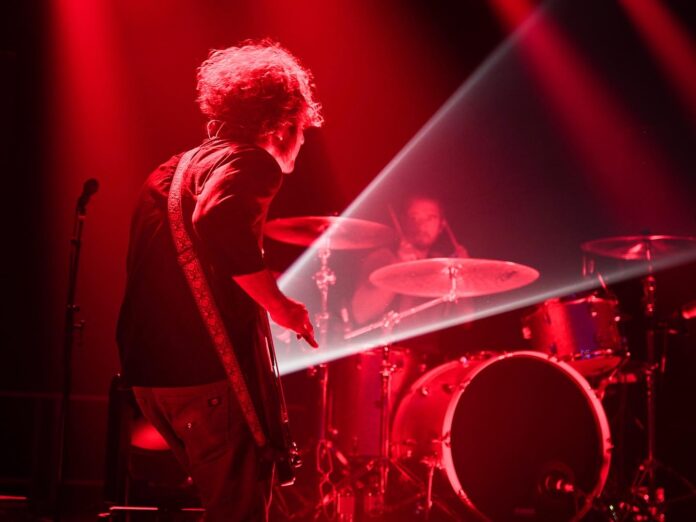 Given the ongoing crisis, at times it didn’t look like I would ever get to see Thrice live. But then their EU Tour 2022 came along, so I jumped at the chance and arranged an interview, which we did right before their show at the Tonhalle in Munich.

WHAT DOES THE PATH FROM EAST TO WEST LOOK LIKE?

In the surrounding industrial area of the Tonhalle Munich, on a huge construction site, sitting on pallets and illuminated by the Ferris wheel, Chrissy and Marcus talked to Eddie Breckenridge (bass) and Riley Breckenridge (drums) of Thrice about old and new freedoms and about how far away from East the still pending Horizons / West album will probably be and how the way there looks like.

AFL: How was the tour so far?

Thrice: Tour has been great. We’ve known the Coheed guys for over 20 years, but we haven’t toured with them in probably 15 or 16 years.

It’s been great to be back together. When we toured before we both kinda have been in our formative years. We were just getting started and like kind of learning how to do all this together… and now coming back together with all this perspective and experience is really cool. We probably toured with them more than with any band – at that time.

AFL: How is it like when you’re friends for such a long time, and you said in the earlier years it was a bit different – was it more a competitive thing when you’re younger? Or is it already like a friendship from the start?

Thrice: I never saw it as competitive. It’s like with any other band. we’re in it together, figuring things out together. In the states they are much bigger then we are now – they play amphitheatres and stuff, it’s been really amazing to watch.

It’s never been competitive and I feel like now it’s neither.

AFL: Is there a difference between touring the US and touring Europe?

Thrice: The language barrier obviously. The shows are smaller. If we were doing shows in the states i feel like we’re probably playing amphitheatres with them, but here we’re doing clubs. For us they would be more in line with what we would be playing back home. But for them, they do really well in the UK and then in mainland Europe they kinda had trouble breaking through, so we supported them in the UK and then now they are supporting us here.
So it’s been like, they help us, we help them. We’re all in this together.

AFL: You’ve been here 3 years ago, 2019 I think was the last tour with Refused. Do you recognize any difference in before the crisis and after the crisis and how does it feel right now?

Thrice: I feel like there are less people at the shows but I don’t think there’s any difference in the energy at the shows. It’s just a little bit less people.

AFL: Yeah it’s pretty tough for a lot of bands, they canceled full tours because of logistics or maybe also because of low presales.

Thrice: Yes, flights are expensive. Getting your gear over here, renting gear here.

AFL: Yes and even for bands here, they are not able to travel because they cannot find people, because they looked for different jobs during the covid crisis.

Thrice: For sure the touring workforce is spread a lot more thin than it used to be, because everybody took two years off whether they wanted or not. And then it was like: We can work again and everybody took job after job after job tried to make up for the last time so to keep like a consistent road crew has been challenging.

„…AS WE GOT DEEPER INTO RECORDING AND LOOKED AT THE MATERIAL WE HAD, WE REALIZED IT WASN’T READY YET. WE THOUGHT IT WAS SMARTEST TO WAIT. We DIDN’T WANT TO PUT OUT ANYTHING THAT FELT HALF-BAKED.“

AFL: So you just released a new song. Is it meant to be a prelude to a new album or is it just to send a sign of life?

Thrice: It’s more a sign of life. We did Horizons / East which we put out in September last year and then our original plan was to do Horizons / West and maybe have it out around this time … and as we got deeper into the recording for Horizons / East and looking at the material we had…we have a lot of material written but it wasn’t quite to a place to we thought it was ready to record. We thought it would be the smartest to wait and not force something and felt like we weren’t at hundred percent invested in it. We didn’t wanna put out anything that felt like half baked. It just didn’t make sense.

But these two songs we put out over the past few months, those were going to be on Horizons / West. And we wrote them while we were writing Horizons / East. I wouldn’t say they’re technically B-Sides, because they were intended to be for something larger, but we realized that we wanted to expand what we could do with West without being tight to those two songs. So we decided to put those two songs out like stand alone pieces and that kind of frees us up creatively to take West where we think it should end up. We didn’t wanna be anchored by those two songs.

AFL: It sounds a lot like your early material, is this something we can expect, that you’re going to sound like in your earlier years again?

Thrice: Not exactly sure how it ended up like that. Maybe because we were producing it ourselves. So it does sound more like us.

AFL: That’s an interesting thought: As you finished your studio were you were producing Horizons East…I think a lot of bands have done this because it was the right step during that crisis to be able to do the things yourself and have everything together. And have it in hands and not needing to correspond to somebody else you need for recording or whatever. Did this change the way you were working on the record again? Or was it just a little bit more independence?

Thrice: I think it’s a bit of both. We had our own studio before, when we did Beggars and the Alchemy Index. And then we had a hiatus and sold that studio. And ever since we came back we were jumping around from rehearsal space to rehearsal space and then we had like a storage space for the gear and it just felt odd.

We also lived all in different areas. I moved back to our hometown in January this year and this is the first time we’ve been all in the same town since before the hiatus.

I feel like there’s always been the desire to get back to that self-contained, self-sufficient model that we had in the 2010’s. So when everybody ended up being back in the same area, we said we need a home base again, with all our gear here, we need to be able to record if we want… and that just free’d us up creatively.

As for the sound though…I think we always have like a push and pull. like Palms was a lot more electronic stuff than we had done in a while, so the natural reaction is to bring it back more into a Rock band. There’s still a lot of synths going on but this all just naturally evolved and comes out of us. You can’t really predict it. It would be interesting to see what other people are trying to predict but we’re just following whatever guides us.

We were inspired by a record that comes out for example, that influences us all. Or we’re are touring with a couple of bands that influence us. Not like directly, like we’re going to the studio and say: we’re going to write something that’s gonna sound like this. It’s just natural what comes out. There’s no concept behind. When you’re immersed in that music that is inspiring you it naturally kinda like bleeds out in our work.

AFL: Yeah sometimes it influences you without really recognizing that it does that thing to you.You maybe just realize it afterwards, and you say: there it is. It’s just honest, it’s true.

Back to your new song: As you watch the world getting closer to the edge every day, there are crisis all around and this gives a strange sort of feeling and I ask myself what is the mission of an artist or a band like you. Is it more enlightening the people and help that they see through it or is it more to spend hope?

„IT DOESN’T NECESSARILY HAS TO SAY: I HAVE IT ALL FIGURED OUT, I HAVE THE ANSWER. IT’S ABOUT THE SPARK OF HOPE, THE CONNECTEDNESS OF PEOPLE. WE WANT TO STAY ALIVE, WE WANT PEACE!“

I think Dustin really tries to… I mean he really will talk about specific problems but in those lyrics there’s always like we can hold on to hope, get through all this. And also as an aspect of self-reflection, like look at yourself. How are you in the midst of all this? What can we do? This is another thing that has been big in at least in the last two records. Whether we like it or not let’s just realize that we’re all in the same things.
It doesn’t necessarily has to say I have it all figured out, I have the answer to this. I think instead of saying A) everything’s fucked up, B) here is the problem I’m talking about and C) this is how you fix it Dustin tries to stress that it’s about the connectivity of the people as humans, we wanna stay alive, we want peace!

AFL: That’s a great last statement. It was really nice to talk to you and see your view on those things.

Thank you very much!