On July 17th, 2020, Strike Anywhere will release their EP Nightmares Of The West (Pure Noise Records). They made us wait a damn long time and the fear that they would take the same direction as many of their companions, who once enthused as a hardcore punk band and were washed clean by zeitgeist.

But not Strike Anywhere. With seven songs, six original ones and a cover song, they are taking up where they left off 10 years ago. And you don’t know whether to say „luckily“ or „unfortunately“, because there are still enough grievances the band from Richmond has to address. It has gotten even worse since they finished working on Nightmares Of The West. Grown to a state that they could never have imagined themselves and that is both frightening and hopeful. Will the social and political peace for which they have been fighting for 20 years finally become reality?

If so, Nightmares Of The West could become the soundtrack of the weirdest and most changing times we have ever witnessed. The EP – in best Strike Anywhere manner – deals with difficult (political) topics such as colonialism, capitalism and the people’s obedience without sounding like a university lesson, but rather with meeting the listener bluntly and personally.

Strike Anywhere are keeping the balance between political and the personal issues and shine musically with what they have always been best at: casting (politically) important messages into melodies that can be sung along and shouted out to become powerful slogans. They are enriched with the personal influences and the changes that have occurred within the band, as singer Thomas Barnett told us in an interview.

This results in vigorous and at the same time catchy songs. The voice of Thomas Barnett hasn’t lost its power, it even seems more intense than ever. As if to say: „But now finally!“

Track 1, Documentary, tells of the overwhelming feeling of loss, contempt and disgust at what our society has become. It is followed by the impetuous song, Dress The Wounds.

It is followed by The Bells, a song about retreading the past and that specifically explores the ghosts of their hometown Richmond. It was triggered by „a walk through the city I took after a good friend of mine was killed in a fire,“ explains Barnett. „There have been a lot of losses in the last 10 years since Iron Front because obviously that’s what happens when you get older – you lose friends and peers. The idea of ​​grieving, but knowing that you don’t have to go through this alone, is anchored in the record. But this song is also about the loss and grief of nonhuman things – cities, time. Things that used to be deep and felt really robust, and now feel flattened by gentrification, flattened by raw capitalism, which is crowding out art spaces and working class communities. It’s about the way cities change and who you lose and where people have to go when they can’t afford to live there anymore.“

While The Bells certainly exudes a sense of sincere, personal nostalgia for all the things and people that have been lost over the years, the song is of course also underpinned by the political views that have driven the band since its inception. Like most of the songs that Strike Anywhere wrote over the years, the songs on Nightmares Of The West are specific in terms of framing and inspiration, but universal in meaning, message and emotion.

Frontier Glitch is an aggressive and powerful, yet melodic burst of defiance and annoyance that also contains the lines of text that give the EP its name:

„The state of world is Nightmares of the West / You’re a soldier / And you just wanna live to see home / But there’s war in our country too / And blind billionaires / Between me and you.“

With Imperium Of Waste Strike Anywhere are packing all the pain, disappointment and horror into a moving melody:

While Thomas Barnett is singing

you can hear background choirs shouting „Hey, hey, hey“ that sound like a wake-up call from the nightmare. They are very reminiscent of the „Hey, hey, hey“-chants we know of We Amplify from the Exit English album. Hopefully this time with more success.

We Make The Road By Walking summarizes what Nightmares Of The West is all about: grabbing the listener by the collar with the terrifying and painful reality and shaking him / her up. But it is also about creating hope and encouraging us to fight the good fight, find comfort in friendship and community, to heal on both the micro and macro levels.

Nightmares Of The West reminds me of what Strike Anywhere and the punk hardcore community have always been for me: togetherness, openness, bite and stubbornness (in a positive sense), realism and a lot of positive energy. 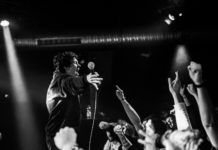