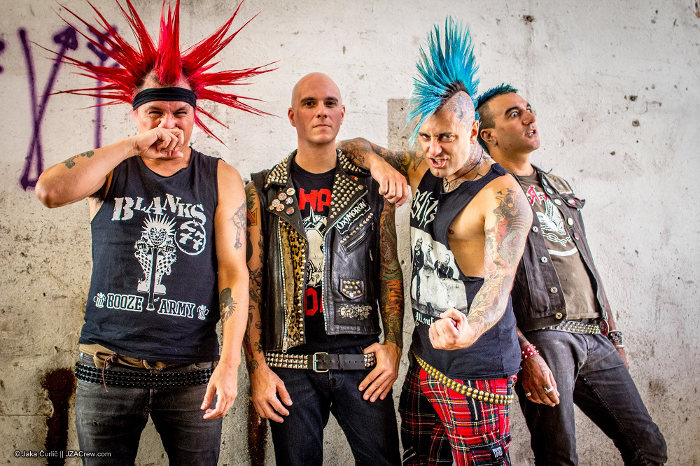 CAN’T STOP US! The Casualties, living Punk-Rock legend, for over 25 years now and they’re not a bit tired. Punk-Rock is and always will their life. We got to talk to The Casualties drummer Meggers in an interview about their new record „Chaos Sound„, the upcoming European tour, the rumors about singer Jorge and more cool things.

[…] if I ever thought any of these complete bullshit rumors were true, I would have left the band immediately. (Meggers about the rumors about singer Jorge)

Interview with Meggers of THE CASUALTIES

„We’ll keep writing music till our fingers fall off.“

Meggers: Yes! We are extremely to come back to Europe this summer. So many cool festivals and shows happening. Happy to see old friends and make some new ones. I’m personally excited for the resurrection fest. Iron maiden is my favorite band of all time. Unfortunately we do not play on the same day as them but it’s still fucking cool to see the casualties on the same poster as them. It’s going to a fun, booze filled summer.

I can’t wait to play some new songs for the first time in Europe!

AFL: You will also play a lot of shows with Total Chaos. Have you a special relationship to the band?

Meggers: We have know Total Chaos for 20 years. Rob and Jorge used to trade letters and record before the Internet was available. Been friends with them for a long time. Stoked to share the stage with them on this tour.

AFL: You release your new album “Chaos Sound” in the beginning of this year. How satisfied you’re with the record?

Meggers: I love it. We all worked hard on the songs and recorded it with a new producer. We went for a more raw unpolished sound then the last one. I’ve seen so many review saying this is our best record to date. That puts a huge smile on my face. It say after all these years, we are still improving. I’m happy with it and fans new and old seemed to love it as well.

AFL: How distinguish “Chaos Sound” from your earlier release in your opinion? Are there differences?

Meggers: We put mics on front of the instruments, played and recorded it. A much more raw natural sound on this record.

AFL: “Chaos Sound” is your ninth album. Will it give a tenth The Casualties record?

Meggers: We will certainly try. We’ll keep writing music till our fingers fall off. If people still want to hear that, then we will keep playing as long as we can. I still enjoy writing and recording. It’s therapeutic for me. It’s also a pain in the ass but the outcome is almost always worth it.

It was always important to us to fight real enemies; the police, the government and so on; not each other!

Meggers: The highs are that I’ve got to travel the world, see and meet people from all walks of life, enjoying our music. When I see a group of people going crazy in the pit because of something the 4 of us created, is such a reward. I’ve met some of the best people because of this band and I’ve met and shared the stage with some of my heroes. The lows.. I’m broke the majority of the time. I’ve missed out on a lot of weddings, funerals, births, family reunions, it’s cost me multiple long term relationships. I miss out on so much personal time with the people I love because we are on tour so much. But we’re all dedicated to this band and will never look back. I’m truly am so grateful for what this band has given me the opportunities to do. AFL: How change the times in the punk scene since the 90ties to today in your opinion? And what time to you like most in the area so far from The Casualties. Why especially these time?

Meggers: There was so much division in the scene in the 90’s. That’s why we have always spoke and screamed about unity. It was important to us to fight real enemies, the police, the government…, not each other. Of course there will never be a complete unified scene but we are trying and still hoping. It’s got a lot better. I loved the late 90’s early 2000’s of the band. We were just starting to learn how to play better, and started touring more. The Casualties, The Unseen and Violent Society tour in 1999 is still probably the most fun tour we ever had. We just got in the van and left. Didn’t know what the hell we were doing and don’t really care. We all bonded, played some great shows and some awful ones it made friends for life. Didn’t care about money or how many people were going to show up. Ahhhh the glory days.

AFL: There were some bad rumors about Jorge. How does it feel when somebody tells so fairytales and want to ruin the person self and also the band with such hard statements?

Meggers: We live in a day and age where anyone can write anything and share it with millions of people with a click of the button. It’s then up to the reader to decide if they want to believe or not. I choose not to believe everything. If I question something, I ask. I look into it. Bottom line is that for me, if I ever thought any of these complete bullshit rumors were true, I would have left the band immediately. That’s the truth. He’s a family man with a wife and a child. He continues this band to help put food on the table for them. People really need to think about consequences on all ends when they decide to join an online witch hunt. The Internet can be a miserable place.

AFL: What do you make besides The Casualties? I often read that Jake and Rick making DJ in NYC and New Jersey? What about Jorge and you?

Meggers: We all work and hustle with other jobs while we are not on tour. Rick lives in LA now and is Djing a lot. Myself just moved to Austin TX and work at bars and venues and do production assistant work wherever I can, Jorge works at a restaurant and Jake works at a restaurant he is a part owner of. Between the band and our personally lives we are always busy.

Meggers: I just got the new Acidez album from when we just toured Mexico. Album fucking rips! Highly recommended. In AUSTIN there’s some great newer punk bands you should definitely check out. The Starving Wolves, Sniper 66 and Punks on Parade are just a few.

Meggers: Iron Fucking Maiden. Been my favorite band since I was about 10 years old.

AFL: Thank you for the interview Meggers! I’m looking forward the upcoming tour. The last words go up to you.

Meggers: Cheers for the interview. Huge thank you for everyone who has stood by us all these years. We are nothing without you. Can’t wait to hit the road and drink some beers with old and new friends.

The New York Hardcore Chronicles – Interview with the film director...