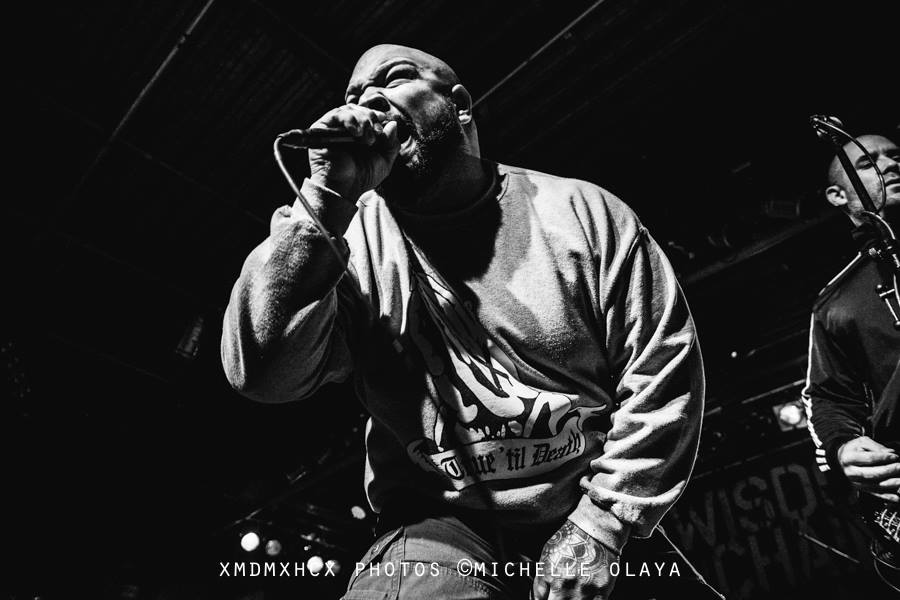 Wisdom In Chains has just ended the Persistence Tour and their club dates in UK with Terror. There they had primarily sold out shows. In 2015 Wisdom In Chains released their smash album The God Rhythm. Reaching top spots on alternative charts worldwide. On 22th January 2016, after their show in Wiesbaden Germany we were able to catch up with singer Mad Joe Black. We were able to talk about U.S. politics an upcoming album, the Tour and a return to Germany in the summer.

AFL: Yo what’s up Joe! Thanks for agreeing to our interview.

Joe: Yah how you doing. I’m Joe from wisdom in chains. I’ve been in wisdom in Chains for the last 10 years. Before that I was in many bands, all based out of Pennsylvania. Yeh that’s what I do.

AFL: This tour is coming to an end, tells us about how the tour has gone so far, what were the highlights and were there any letdowns.

Joe: The tour is great, I get to play with some of my favorite bands every night so it’s already bin a highlight. I can’t say that there’s been an actual let down some shows were not as good as other shows but still we had great day and great nights.

The highlights I would definitely say were, Berlin was amazing, and Poland was amazing our first show in Warsaw was really great. A cool little surprise was the Paris show. It was in a small club limited to 450 people cal. It was sold-out it was amazing an awesome crowd. Every night has its own highlights, there aren’t any letdowns, when I get to play before people who have never seen me and I get to promote who I am and what we’re all about it’s a win.

AFL: Were all of the shows sold out shows?

Joe: No not all of them. I think a lot of them were I can’t remember spificicly. I think tomorrow is sold out; it’s the one everyone is talking about “Dresden”. Everyone is like talking about Dresden. That’s the one is like Dresden oh my god it’s sold out so many people they always say that’s the best show of the tour so! I haven’t played in Dresden in years so I’m excited for the show.

AFL: Were you familiar with all the other bands you got to play with on this tour? And above all what are your thoughts towards Risk It.

Joe: Actually we have played with Risk It quite a few times in Germany throughout our years of touring; we’ve known those guys for a long time. We’ve been really good friends with the drummer Andre. The only band I was not familiar with was Iron Reagan. So before the tour I looked them up on you tube and I checked them out. They are the funniest greatest dudes, so everybody on this tour is vibein with each other.

AFL: With the tour at an end are you looking forward to getting back home or would rather have stayed out on tour longer?

Joe: Well we’re actually going to the UK after this. So we have another six shows.

AFL: Together with Terror?

Joe: Yes that’s correct. The last show is in London, I am absolutely looking forward to going home but not quite yet.

AFL: Aside from Wisdom in Chains, do you have family? Children? Do they get to accompany you on tour? How do you earn a living?

Joe: My wife and daughter are not interested at all on coming on tour! I kind of wish they were in a way, my son, he really wants to come on tour with me. He wants to travel and see the world and go to the places I get to go. Hope fully we will soon have to opportunity to take him with us at least on parts of our US tour. I have taken him too many shows overnight here and there including Canada, with the band so I think that one day very so he will be ready to come over here to Europe on a tour with me. When I’m at home I’m an interior carpenter and member of the carpenters Union in N.Y.C… I work in High Rise office / apartment buildings in N.Y.C., Building interiors of primarily office spaces.

AFL: In 2015 you released your 6th album The God Rhythm, here in Germany it was quite successful spending several weeks in the Cortex Charts. While on tour are you able to follow the progress of the charts?

Joe: We are able to flow a few different charts but mainly Cortex and other DIY stuff. We like to stay in touch with the actual Hardcore People. The album popped up in other places too. It’s cool to be recognized. Recognized for doing something that people love.

AFL: Were you expecting that kind of recognition.

AFL: On this album you have a song about Joey Ramone. Is the song about your personal relationship with him?

Joe: You know what, it’s funny cause um U2 did a song about Joey Ramone and I was already writing a the song about Joey Ramone and they had a video and it was a big sensation and all a commercial for something, which is cool you know. I’m not a snob or something you know everyone loves Joey Ramone. Anyone who plays Rock music should pretty much love Joey Ramon. U2 did a pop song about Joey Ramone, and I wanted to make something Raw and emotional like a Hardcore or Punk Rock style song. Something that is similar to the Ramones actual music. Not that I think that our song sounds like a Ramones song, I just didn’t want it to sound like a U2 song. Joey Ramone was my hero. My brother gave me a Ramones tape. I think it was a best of, most likely Mania, when I was 12 years old. That was the first Punk Rock music that I fell in love with. For a long time that was all I listened to. I was like this is amazing I want to find more of this music. But I didn’t for a few years I didn’t. I only listened to Ramones that was my only Punk Rock Music. So one day I met Joey Ramone, I was a teenager, like a Fan Boy. I was like Joey, Joey and I shook his hand and he patted me on the head, and it was fucking awesome. He has a special spot in my heart, you know.

AFL: On The God Rhythm you have a song Violent Americans, Do you see America or rather Americans as the most violent society?

Joe: Violent Americans, I wrote that after the Freddy Gray incident. It’s hard to put. I really didn’t get very political on this album. Not like previous ones epically like on “Everything You Know”. It’s strange maybe that’s how it looks from Inside America. It’s just that peoples first reaction is to do something crazy and violent. That includes Cops, the people that are being oppressed by the cops, it includes everybody. The last thing people would ever do is reach out and say hay man how you doing what’s going on what’s the matter what’s wrong. That seems to be the last thing you would ever do. The first thig that people do is come out swing and cursing and shooting whatever the case may be. So after the Freddy Gray incident I started thinking why are we why people are like this, what is it about America that makes people so. If Canadians have more guns per cap Ida than the United States with way less murders up there, what’s the difference? Like what is it? It’s a song about me trying to come to grips with it.

AFL: In your opinion who will be the next American president?

Joe: Bernie Sanders, I personally like him. He has a very honest way about him at least he seems honest. Even thou I don’t agree with everything he says he seem like the guy who is going to do what he says. Which is more that the most presidents, who haven’t done the things they say they would. It’s more of a game so Bernie Sanders doesn’t seem like he‘s playing games. He saying this is what I’m going to do, and saying t fir the last 25 years consistently. If you’re down with it then vote for Bernie. Myself I endorse Bernie Sanders.

Joe: Thanks for the interview we’ll be back in July come see us.