Hello Wolfpack, when I asked for the review I wasn’t aware, that the band existed since sometime. So please introduce yourself to our readers.

We are from Paris, and started the band in 2012. We released 2 albums and we are now here to speak with you about our new EP called « A.D. » out on BDHW Recordings.

You released two albums prior the EP. What’s the reason behind an EP at his stage of your career ?
We chose the ep format to show that we took a new start for the band. As our way of thinking changed, we decided to change our image, logo and of course our music. With an entire album, the transition would have been too brutal, we wanted to indroduce people to our new mood and style in a softer way.

How differs the sound to your prior releases ?
It’s more mechanical, strict and savage ! Our prior release was more mid/down tempo, with some sludgy touch. Now it’s more tight and nervous. We also added some industrial samples to dehumanize our sound as much as we could, it was fully intendend. It sounds as the world we’re living in.

The promo text compares your music to Godflesh & Fear Factory. Are those inspirations for your art ?
For sure ! I’ll speak for myself but I’m a huge fan of nu metal and also industrial metal, so yes, we are realy into those two bands. Even our cover is a bit inspired of Godflesh for the colours.We grown as metalkids with the Roadrunner Records roster, which means with band such as Fear Factory.

Which other bands inspire you ?
I could name a thousand ! But as I said, the US Nu metal from 90 and early 2000 : Slipknot, Machine Head, Chimaira… And on an other side, all the new wave of metal hardcore like Code Orange, Vein, Kublai Khan, Bloodbather… I think we can consider ourselves in those waves, it is sick to see all the nu metal kids melt their first love with some hardcore vibes.

What are the lyrics about ? Do you consider yourself a political band ?
We are not a political band at all, my lyrics are focused on the self hatred, the will to be someone else, or the misundestand of the world we are living in now. It could sounds politics maybe a few times, but to me it’s more social. I don’t want to speak instead of people, so I juste describe what I see, and how I feel about that, and maybe some people will feel the same and being touched.

What does A.D stand for ? Or why that title for you EP ?
The most know meaning of A.D is « Anno domini » which means « The year of the Christ »… But in a part of a bible chapter is « Ante Diluvian », or « The fall of mankind, and the downfall rise », and we used it in that way. We use it to illustrat the fact that everyone has two sides. Also, we wanted a short name for an ep… like a code name. 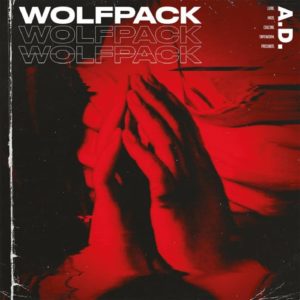 What does the cover artwork represent ?
The artwork explain what I just talked about before. It shows hands preaching (took from an old paint) wich could be a sign of peace and redemption but the glitches and the dark red color contrast this. To show the other side of humans, their taste for blood and performance at any cost, life, the hands are a too to hide our true nature.

Lurk starts with some heavy breakdowns. But the rest of the album is much more straighter to the core. Was that intentional ? Or is it just my opinion ?
You probably feel that because the song starts with a fast part, then brutaly slow down. We simply wanted to demonstrate all the variety of the band in this first song, fore sur there are heavy parts but also classic metalcore riffing and even a loung part ! We wanted to show how crazy we can be and that we’re not only a « heavy band » even if heavy music fans can still count on us !

You played with a lot of hardcore groupes and consider the European scene your home. What about the Parisienne scene ? Are there other bands you can recommand to us ?
We love our city, we also book some shows to make the scene live here, it was important for us to give and not only receive, we are not the type of people claiming that scene needs to be supported without doing anything, we want to be active ! About the band you should listen to, first of all, Worst Doubt, but if you don’t know them yet, it’s just question of time, they’re the best french hardcore band in my opinion. If some doom fans read this lines, you should listen to Hangman’s Chair wich is for me one of the best band in the world. Also Perturbator if you are open to synthwave, our previous drummer is now part of it.

Covid-19 hit the underground scene (as well as the whole world it seems) very hard. Your tour got cancelled. So how do you compesate the loss ? What are your thoughts on the pandemic ? And how is life in Paris today ?
Well it’s very hard for us, we just wait for better days, fingers crossed to found new tours when all this shit will be over. We also think to all of the bands, promoters touched by this pandemic like us. Despite the situation, we still work on our promotion, giving some interviews… and also working on some promo material but I can’t tell more about it. We spent a lot of money, time and energy but it’s the same for all bands, so we’ll not complain about it and just keep working. Otherwise, life in Paris is a bit weird, no one has a garden here, you feel a lot of pressure and fear from the people but… this is Paris just after we had nearly one year of riots, it’s not that calm city you see in the movies. We’ll fight this shit all together but all at home, nothing better to do.

What are your next plans ? Is there an album in the pipeline ?
We’re working on some tracks but I can’t tell you the format we’re working on now… I think we try to defend what we could of this ep, it’s the priority and we’ll see how things goes.

What are your first thoughts on these subjects ?
– Violcent dancing
Can be hard but keep it fun
– Nazipunks
FUCK OFF
– Trump
Same as nazipunks
– Angela Merkel
Nothing
– Away from life
The scene

So, you got it, you reached the end of my questions. Thanks for your time. The last words are reserved for you…
Thanks for this interview, stay safe, stay at home, listen to music, it’s the moment to support your favorite bands and also to discover some other !