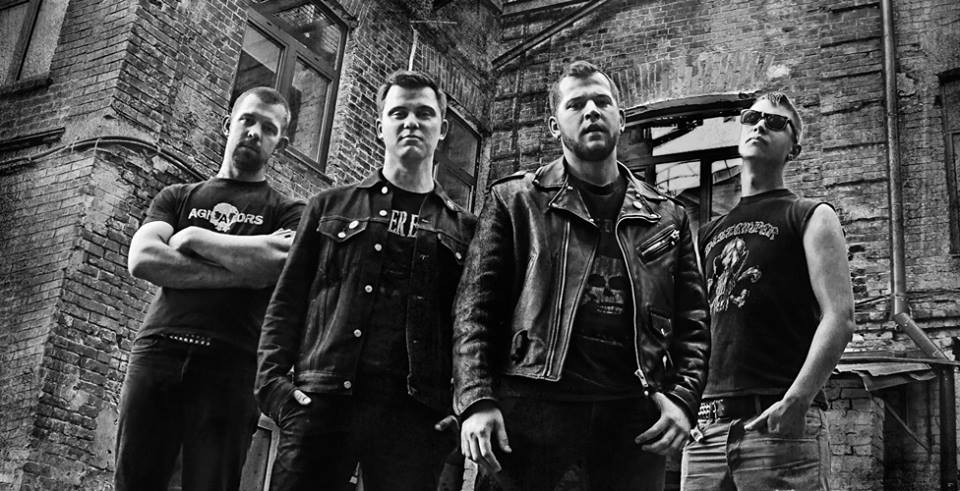 At the one hand I’m very lucky, that it comes to an interview with my very close friends from the Moscow Punx AGITATORS. On the other hand I’m sad that it must occur on digital way. I wish I could interview them personally because I’m very missing the guys. The cause is that their hometown Moscow is shortly 1.000 km far away. I get to known the guys on their Germany Tour in fall 2013. Read here the interview to hear more about the AGITATORS and what they say about the Punk-Rock scene in Russia. Hi everybody, glad to have a talk, not-live unfortunately. AGITATORS is a four-piece band since 2006, but founded as a trio at the band start. Here are two Sahas and Ivan, Dima the drummer is paranoiac to interviews 😉

AFL: Sasha you were not always the front man of the band. How came the change that you are now also on the vocals?

А.С.: To be sincere I was always singing some lead vocals 50/50 with our former lead vocalist Alexey “Red” Mitin. But our voices tones were such familiar so you never can guess who is actually singing at this very part of a song. Check out our first two LPs and you`ll see what I`m talking about. In 2011 abuse voice was kicked out of the band, same time Ivan joins us as a guitar player. Four piece for the luck 😉

А.С.: Yes, right before AGITATORS and it was a trio. Same line-up, also some our friends joined from time to time. Different band name and music style.

Ivan.: I think it was 2002 when I did my first gig with my first band. Since then I`ve played in about 9 different bands, different styles – screamo/hardcore, Oi!, pop-punk, celtic-punk. Some were weird, some were great, for instance band ZUNAME (spells like “tsunami”) is a mix of melodic street-punk with heavy and beautiful voice mixed with bag-pipes tunes. This band still exists and I do hope they tour Germany someday, it`s really worth being listened to. One of my beloved bands where used to play were Best Enemy, a kind of “Against Me” punk, that was good damn songs and days but they came to end.

AFL: Are your songs in English or in Russian?

А.С.: Most lyrics written by me, in Russian, my English is not so good yet. But 4 years ago we had an idea of making a record in English, but it vanished due to line-up changes.

AFL: Which bands and music do you count to your influences and how would you describe you music?

А.С: Answering this question is the hardest thing for us, let our fans do this for us, it will be the most sincere answer. Our tastes differ, but for sure there some relative points of love to music (The Beatles, ha-ha-ha). Most efficient music influence you get when you`re a teenager. For me it is Siberian Punk (soviet wave of punk rock from 80th), 60th rock, reggae, punk 77, and then some heavy-metal and so on. As you see there is no proper direction, it`s all grey – from jazz to crust.

AFL: You release so long ago a video with a new song called ‚BERLIN-MOSCOW‘. The video are spread quite quick through the channel ‘HARDCORE WORLDWIDE’ publish it. The song is a co-release with the band TILIDIN from Berlin. How came it to the song and the video und about what occurring the song?

А.С.: At our Berlin show Ivan called his friend Thomas Pabst to see the show, he knew him before during his previous visits to Berlin. We didn`t spent much time together, just had few beers together. In one week our friend from Kirov asked us for a place to stay in Moscow for one of his «berliner» friends, and it was Thomas. For sure we`ve partied for a while and during one of them we made an acoustic song as a token of his visit and friendship. Later we recorded an electric version, put there Thomas vocals, previously recorded at our home studio. The music video idea was inspired by the song, but video makes it visa-versa if you might`ve noticed.

AFL: Your latest release is in the meanwhile also already two years old. Is their besides the new song ‘BERLIN-MOSCOW’ more in the pipeline? Do you plan a new album?

А.С.: Sure we do, the biggest part is done but it`ll take more time to make it the way we want it to be. Hopefully we go to studio in spring/summer for tracking. Berlin-Moskau will be there, but you`ll have more surprises on it.

AFL: Last year was on tour in Germany. What do you like at Germany and what not?

А.С.: Not to mince words – the tour was rad! First of all we saw how it works in Europe, the quality of management and a loyalty to the band is perfect, and we are not even a third-grade band. We toured in Russia before, it’s much harder due to long distances and culture aspects. The worst and the funniest thing happened is that I got denture glue instead of tooth paste – the can was absolutely the same. You might imagine what happened to my jaw J. It was first trip to Germany for some of us, so if there is a culture shock – this is it.

AFL: What were you personally highlights of the tour? And how distinguishing the German visitors from the Russian in your opinion?

А.С.: People is the main thing we highlight, very friendly, welcoming and easygoing. The difference between visitors is that in Germany people do go to the shows, even if they have an unknown band in town playing a show tonight. This is what we call a real support. We also saw some reviews in local newspaper and advertisement on radio, that’s was a honey for a soul.

AFL: You had the chance to share the stage with some big bands like THE CASUALTIES or the US BOMBS in Russia. How were these shows and how are the bigger bands?

А.С.: Well, that were the shows we could dream about when you were a kid with a cheap guitar. Tell me when I was 16 that I share stage with US Bombs, I`ll burst with laugh to your face.

AFL: Are you playing in Russia just such big shows as with THE CASUALTIES, or smaller club shows? How many visitors do you have in average? Are you a support band on the club shows, or more or less the headline of an evening?

А.С.: It depends, but we always happy to open a big show. We do lots of local shows in regions with local bands, but we prefer not to play as a headliner, much better to stay in the middle when 5-6 bands play. 100 people is what we have in average, but you`ll never know because it’s a punk-rock.

AFL: What were the personally highlight from your musical career?

А.С.: German tour, first music video, shows with bands we like since we were teens. It all happened to us in past two years.

AFL: Many Germans don’t know much about the Russian scene. You hear often that it is really dangerous being a Punk-Rocker in Russia. Nazis are reign the streets and the police let them allow. Is it really so extreme? How do you see the current Punk-Rock / Hardcore scene in Russia? Please tell a little bit to give ignoramus an insight.

А.С.: Situation was really rough about 5 years ago, people being killed by nazi-scum right before the show. One of our good friends Ivan “Kostolom” Khutorskoy died for supporting good and friendly ideas, being a friendly guy for everybody but nazi-scum. Recently a documentary movie was released in Europe and Russia, in his memory, called “Sad but true”. Speaking about today – situation has changed to a better side, now it equals to what you have in Europe. Unfortunately there is always an ugly kid in family, as we say in Russia. It is still a problem in regional town, but we believe it a question of time.

AFL: In Germany are the Russian bands WHATE WE FEEL and MOSCOW DEATH BRIGADE quite hot. Do you know the bands personally and what Russian bands can you recommend?

А.С.: We know some guys from WWF personally, but we never played the same shows, there are too much in HC, and we are too much in punk-rock. Distemper are damn good, they are pretty popular in Germany.

Ivan: Such band as Poseurs and Teni Svobody are worth listening to. Also recommend Aybat Hallar from Ufa, their singer from USA and what they do is beyond any description.

А.С.: I do some sound engineering in studio for living. Spend time reading historic books.

Ivan: Are we at job interview or what? Just kidding. What we want is make good music and tour more inside Europe. We got more bands we need to play with, Rancid or Motorhead will be fine, no kidding this time!

А.С.: Be sincere, always find something new for you, never be possessed by propaganda. Cheers!!!

Ivan: Travel as much as it possible and make some new small discoveries every new day of your life, it fulfills you as nothing else.

„Heaven’s Too Good For Us!“ – Interview with TRUE LOVE