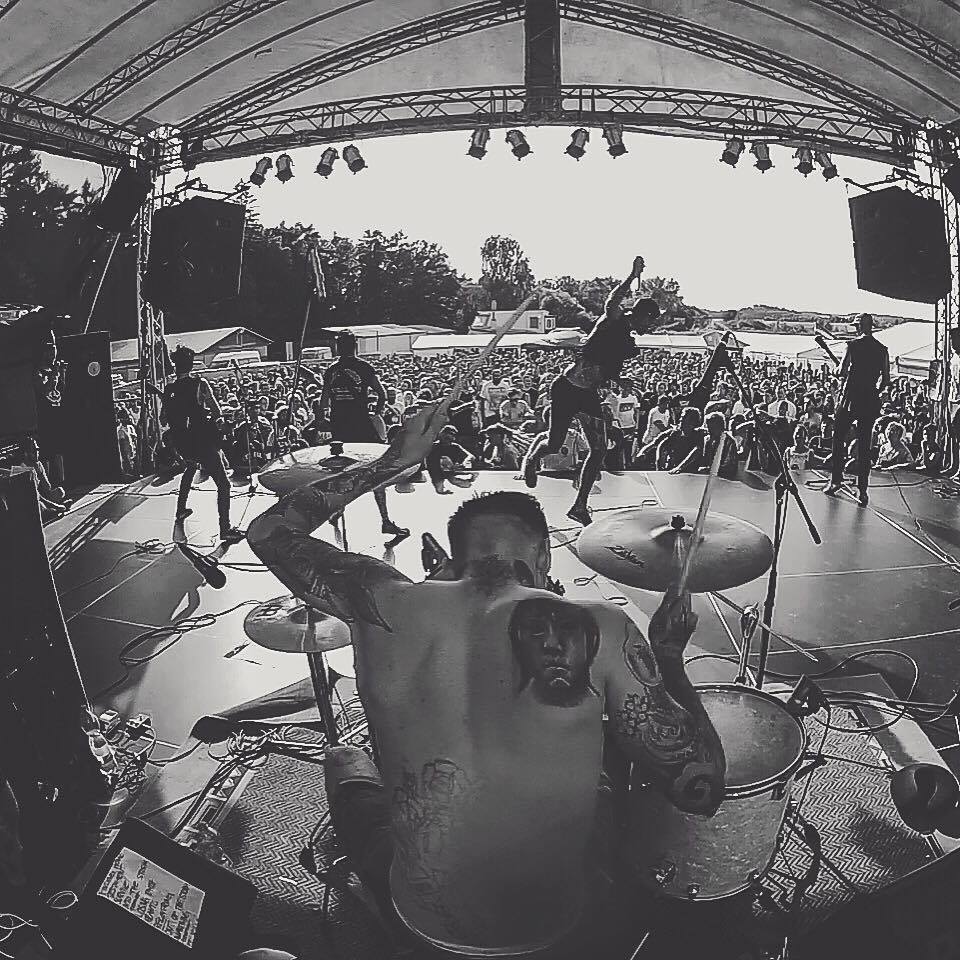 AFL: Hey there! How are you? Firstly thank you for taking time for an interview. Can you short introduce yourself? Since when do you make music together? How many members you are and so on?
We’ve been a band since 2007. We’ve had people leave the band and others coming. We’re now a solid group of people moving in the same direction, at the same pace. It feels good.

AFL: Which bands and music do you count to your influences and how would you describe you music? Which three words fit best to ANCHOR?
Three words, honest rock music. As a songwriter I take influence from anything that’s real. 108, Good Riddance, Embrace, Robyn, Separation, Entombed and so on. I live for music and constantly hunt for more.

AFL: Your new full length DISTANCE AND DEVOTION is since March available. Your first full length since almost 4 years. How satisfied you are with the album, how the album differs from your latest releases and what can the listeners expect on it?
It actually came out april 6:th. We’re all very happy with it and can’t wait to share it with everyone. I feel like it has the same components as our previous releases but it’s a lot better put together. In a way Distance & Devotion comes from the same place as Testament, Recovering, It kills you to know, Finding home and so on.

AFL: Where else does the band usually get its inspiration from? Which themes you’re treaded in DISTANCE AND DEVOTION?
For me creativity is a way of living. That means I look for inspiration everywhere, all the time. Looking for things that move me and make me wanna improve. Lyrically I’d say this record is a bit more personal. Or that’s how I take it anyway. Then again, what’s personal and what’s political?

AFL: In May you’re playing a couple of shows in Germany, Austria, Slovakia and Croatia. What are you looking forward most and how came it to play the tour together with CROOKED LETTER?
We’ve been friends with those guys for many years. Beautiful people, fantastic band. We’re very happy they agreed to come along.

AFL: You already played a couple of shows in Germany. What do you like at Germany and what not and how distinguishing the German visitors from the Sweden in your opinion?
Yes, Germany is definitely one of our favorite countries to tour. The shows are always very well organized. As far as the vibe goes I’d say rock shows are more or less the same everywhere. The differences are small. The similarities are many.

AFL: Sweden is quite popular for his very good Pun-Rock / Hardcore bands. Especially for a relative small country there are a lot of very good bands. How it came and how do you see the Swedish scene at the moment?
It’s a cliché, but the long winters probably have a lot to do with it. If you don’t want to kill yourself you better do something motivating. Make something out of your time. That’s at least how I feel. I’d say the punk/hardcore scene is very small. Only the ones who really care stay, which to me is awesome. AFL: What are your favorite bands and records at the moment? Is there any inside tip from Sweden?
I’ll have to say Rentokiller’s new album Humankaaos. Definitely one of Sweden’s best kept secrets. All of their releases are fantastic. They do their thing 100% and I respect that a lot. Apart from that I’ve had Bloodbath’s Grand morbid funeral on constant repeat since it came out. I’ve always loved Millencolin and their new record is awesome of course. Fredag den 13:e’s new album is going to be awesome and for those of you who haven’t already checked out Crooked letter, do yourselves that favor. They’re fantastic!

AFL: Here are some tags. What do you think about it?
Soccer: I play for a local team. The season just started so wish me luck. I love the game.
Straight Edge: I sure am!
Ikea: Will soon serve vegan meatballs. Pretty cool, I reckon!
Punk-Rock: In it for life.
Sauerkraut: Not a fan, sorry haha!

AFL: What are you doing otherwise besides music? Work? Hobbies?
I work on a book about children of alcoholics. Almost done with it. We’ll see what happens. Since a while back I do merch for swedish hiphopsters Looptroop Rockers. I’m in a bunch of bands. PAINTED WOLVES, BLESSINGS and CORRECTION to mention a few. I’ve got the football thing going, I do yoga and I’m planning on going back to the university next semester. I do what I can to stay busy.

AFL: What are your plans for the near future and where do you see yourself in 10 years?
I’m really bad at this. I make plans a few months ahead and that’s it. 10 years from now I hopefully still write and record music, tour, hang out, do tons of sports and have a job I like.

AFL: Final words and greetings?
Thanks for supporting ANCHOR. Check out our new album Distance & Devotion and come see us on tour! We’ll be everywhere!