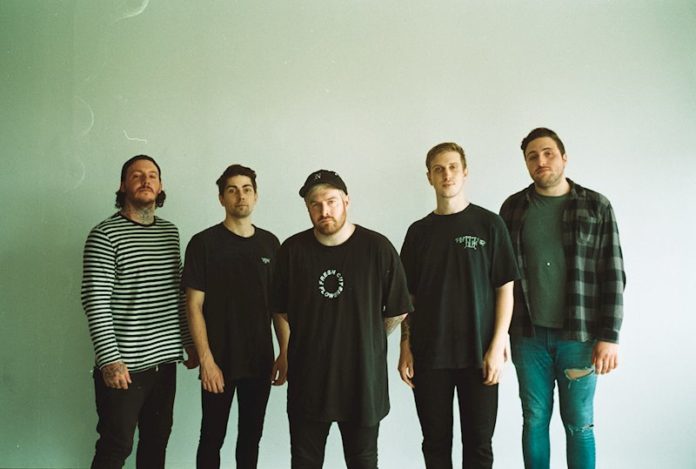 „I have Counterparts as an outlet for all of the bullshit I experience (…) I guess my only suggestion would be to find your own outlet. It’s the best thing that’s happened to me.“

On November 1st Counterparts released their new album Nothing Left To Love. We took it as an occasion to talk with their vocalist Brendan Murphy about what it means to play Metalcore in nearly 2020, about bringing their music to life and the (funny) side effects that come with it.

AFL: Hi Brendan, thanks for taking your time! Your latest album Nothing Left To Love was highly anticipated and deservedly so. Can you tell me a bit about it? How did it happen? Did you set yourselves the objective of writing a new album every two years and now it was about time? 🙂 Or does it happen naturally, like realizing that you collected that much material that it’s time to release it?

For us it almost never comes naturally, like in a “jam” setting. We usually have to lock ourselves in a room with instruments and a computer with the intent to actually write. I’m envious of bands who just jam the songs out, but thinking about doing that for Counterparts is giving me a headache, haha.

AFL: Well, I didn’t notice that yet. Nothing Left To Love sounds totally „natural“. And it sounds like a typical Counterparts record. No big surprises, which is a good thing actually. It seems like you found your style and that you obviously don’t feel the urge to do spaced-out shit. But: Do you sometimes feel the pressure to do something new and revolutionary to gain more attention amongst all the other Melodic Metalcore bands?

All the time, haha. I feel like it’s super common for bands to get scared and feel like they need to reinvent themselves in order to stay relevant. I’m definitely no expert, and all the power to bands that take insane risks to make themselves happy and to gain new fans, but I feel like for us we’re content with the style of music we play. I don’t feel like there’s a need for us to change up like crazy. If I wanted to play a different style of music, I’d just start a new band. Actually, I did that already haha. It’s called END.

AFL: In an interview with Loud Wire you once answered: „That’s always the problem, we’re too metalcore for a hardcore crowd and too hardcore for a metalcore crowd.“ This reminds me of our AWAY FROM LIFE claim „Too punk for hardcore, too hardcore for punk“. I actually think it’s cool that people have problems to pigeonhole Counterparts. You’re not a scene band. You just lay all your personality into your music. So if you needn’t to explain your style with a genre name, how would you describe it then?

See! You guys get it. It’s all about walking that thin line between two worlds. It’s both rewarding and incredibly frustrating. I think “Metalcore” does sum us up perfectly though. It’s exactly what it stands for. Metal and Hardcore, literally couldn’t be more simple than that, but for some reason people have a really hard time with bands that do both. At least they do now, I feel like back in the early 2000’s if you weren’t doing a blend of both people weren’t interested.

AFL: If one listens to your music and does it the way like I do – means paying attention to the lyrics – it’s obvious that you are dealing with a lot of sadness, self-doubts and fear. The same listener notices that outside of the album sleeve you are funny, goofy and pretty self-confident. Beyond the fact that you can let out all your bad feelings in these songs and go on, feeling relieved, is this a message you wanna send out? That there isn’t just black and white, not just sad or happy, but more like a natural flow between these states we just should accept?

No that’s exactly it! Nothing is black and white. Everyone goes through enormous amounts of bullshit from time to time, some more than others, but that doesn’t mean that you’re not allowed to enjoy yourself either. People are often shocked when they meet me because I’m generally pretty cheerful and I love making people laugh. I think that because I have Counterparts as an outlet for all of the bullshit I experience, I’m able to be the best version of myself. I guess my only suggestion would be to find your own outlet. It’s the best thing that’s happened to me.

AFL: You worked with Will Putney again, who seems to have a big impact on the bands he produces. How would you describe your collaboration with him?

He’s the pope of metalcore. He’s a genius. He’s also one of my good friends so I’m not gonna sit here and kiss his ass TOO hard. I mean, we pay him well after all haha. He just knows exactly how to bring out the best in all of us. When I go back and read lyrics I wrote before we started working with Will and then right now, the difference is actually insane. I’m telling you right now, unless something absolutely insane happens, I’m never recording with anyone else.

AFL: The classical question after your favorite bands, but asked differently: When you come home after some weeks in the studio, which is the music you wanna listen to first?

Nothing heavy, haha. Pop, emo, indie, whatever. Anything but heavy music. Listening to breakdowns for 5 weeks straight will get to you no matter who you are.

How excited are you when it comes to a new release? Do you give a lot about the opinions or do you see it more like a process you need go through personally, no matter what the people say?

I get very excited, but it’s also pretty scary too. You want to dive right in and play a bunch of new stuff live but sometimes, you forget that you have to pace yourself because you made the record, you know the songs, sometimes it takes fans a while to even give the record a good listen. I think we have a pretty good balance with our fans, meaning we’ll play just enough new stuff to satisfy us and still throw those old bangers in there to keep them happy too. The last thing I want is someone to leave our show bummed out because they didn’t have as much fun as they thought they would.

AFL: How do you deal with bad critics? I mean, especially with your lyrics you open up a lot. So a damning review might feel like a personal attack. Or don’t you give a shit about the opinions of others?

I straight up don’t pay attention. They can kiss my ass haha. You’re either in or you’re in the way. Art is entirely subjective and you can’t please everyone, so rather than being upset at the handful of people who hate your guts, take a step back and realize that there are almost always more people standing behind you than standing in your way.

AFL: Which significance has the touring? How important is this to you? Is it more like a required part to promote your music or do you really look forward to hit the road and get in contact with the crowd while performing your songs?

I’d say touring is probably the only way bands can market themselves and make money in 2019. Heavy bands, that is. I love touring, it’s hands down my favourite part about being in a band. I’d take a show over a recording studio any day.

AFL: I imagine you guys sitting in a tour van trying to choose some music for the trip. Is this an easy thing to do or would there be a lot of fighting about it?

We never fight about that because the rule is whoever is driving gets to DJ. If you’re behind the wheel, it’s only fair that you get to pick what’s playing. To be fair, most people who aren’t driver/shotgun are usually asleep or have their headphones in anyway.

AFL: You were touring Japan recently which is known to be your favorite destination. I can imagine that it is a huge thing for you since the culture is so different from any other. Which was the craziest, stunning or best thing that happened to you there?

I think one of the craziest things for me on my last Japan trip was filling in for Varials on vocals. It was a lot more challenging than I thought it would be, and I feel like I wasn’t as prepared as I should have been so I was definitely nervous. Being on stage with a different group of people essentially doing karaoke is insane. It’s so fun but at the same time you want to do the band justice and not make an ass out of yourself. Best part of the trip was meeting Ryuji the shiba (@ryuji513) in Okayama. We’ve been friends on the internet for quite some time, we’ve even used pictures of him for merch/tour posters, so it was nice to go pet him. His owners are awesome!

AFL: You also released a Split EP with Stray From The Path. How did that come? And who had the idea of choosing that Smashing Pumpkins Persiflage?

Honestly, it was an idea that Tom and I came up with probably at the studio after eating way too much sushi in the kitchen and laughing our asses off about nothing. I can’t believe our labels were down for it. The cover is ridiculous. I think that one was my idea because we did something similar with the Wedding Singer cover for You’re Not You Anymore.

AFL: Haha, yes, thanks for remembering me of this one. I successfully forgot about it. But that’s really cool that your labels give you this kind of liberty. This tiny amount of craziness is what people like to see, I think. And maybe that’s your special way of doing crazy shit still. 😉

Thank you so much for your time and openness! Have a great time promoting your new album and please do us the favor and visit Germany soon!