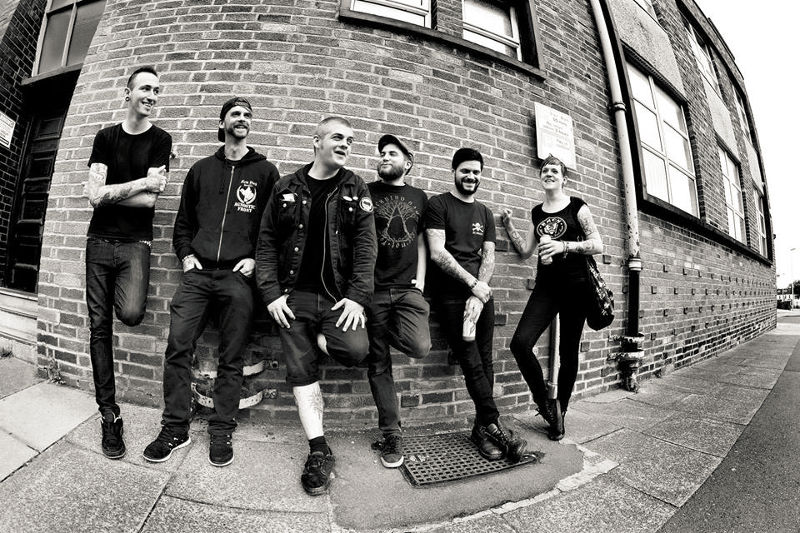 The Roughneck Riot belongs to the zu den trendiest folk punk bands from Europe. The UK based band founded in the year 2005 and release since today three studio albums. They also touring yearly through Europe. We could talk with frontman Matty in an interview.

AFL: Hey there! How are you? On November you played a big tour through tour to Europe. You enjoyed the time?

Matty: Hello! We’re doing pretty good thanks! Yes it was an awesome tour for us, we always enjoy touring Europe!

AFL: Were there any highlights on the tour?

Matty: We played a few shows to some really good crowds on this tour in Towns that we’ve never played. To come to a new place and play to a room full of people is amazing, especially in the middle of the week when we expected nobody!

AFL: You’re next tour is already booked and will start on 30th March. Are you looking forward? Matty: Of course! Its not as long as the last tour, but we can’t wait to get back on the road!

AFL: You are a very touring band! What things do you like being on road and what things to you like less?

Matty: There are so many good things about being on tour. We get to play music nearly every night, meet so many cool people and we’re met with such kindness and hospitality all the time. We actually eat good healthy food on tour too! However i would love to be able to do something about the lack of sleep, long drives in crappy vans and praying we make it to every gig. Being cold and damp 90% of the time, and the cost of mandolin strings… but everything else makes up for it so we’ll be fine wink emoticon

AFL: Your tours are booked by Nico of Subkultura Booking. How came the contact to Nico?

Matty: We were looking for a new booker, and our friend Dave had been in contact with Nico to do with booking other bands, and luckily Nico offered to help us out and has been working really hard for us since then!

AFL: You released your new album Parasites in September 2014. Have you plans to release new music this year? If yes what have you planned?

Matty: We may release something later in the year, but were focusing on writing album number 4 at the moment! We’ve written a few songs already that are slightly slower and different to our older stuff, with acoustic guitar instead of mandolin. But now were writing some faster songs too so it should be a good mix!

AFL: Your kind of music is a very cool mix between punk rock and folk. How came it?

Matty: We originally didn’t incorporate the folk side, as we were only a 4 piece and couldn’t play the instruments, but i started getting into The Pogues, Dropkick Murphys, Flogging Molly etc and decided to learn the mandolin. We brought in the banjo and accordion too but we find there’s a huge amount of focus on Irish music and Irish-ness in general in folk punk, which is cool, but didn’t make sense to us to play as were from shitty old England anyway, so we started to just carry on writing punk music but write our own melodies for the folk instruments and we ended up sounding like we do today…

AFL: So which bands would you count to your influences and how would you describe you music? Which three words fit best to Roughneck Riot?

Matty: Our influences are hard to pinpoint really as they’re constantly changing, and with 6 people in the band it’s difficult to say who influences us the most really. We like bands like NOFX, Bad Religion, Against Me!, Hot Water Music, The Flatliners, Streetlight Manifesto, The Levellers, Crazy Arm… the list could go on and on. Theres also the amazing bands we play with in the UK scene that influence us a lot. Theres some fucking awesome bands in the UK right now! 3 words to describe us? Needs More Practice!

Matty: We didn’t intend on writing political songs when we started the band but it just happened as we’ve learnt about the world. There’s too much going on to ignore. We often get inspired by our disgraceful government but we also write some songs about personal experiences in our lives. Hardcore: Sick Of It All!

David Bowie: Never been a fan. People dying is sad though…

Punk-Rock: is better than a kick in the tit.

AFL: What are you doing otherwise besides making music? Have you steady jobs or some special hobbies?

Matty: Yeah most of us are doing some sort of job to keep ourselves going and to try and fund our life as touring musicians… I’m personally hoping to start a tattooing this year, Cait’s starting to put on punk gigs in Warrington again this year, Greenys cleaning toilets and ruling the land of mine craft so were keeping busy!

AFL: Where do you see The Roughneck Riot in the next 10 years?

Matty: Hopefully we’ll have played all around the world… and still be alive!

AFL: Ok that was my last question. Want you add something or have you final words?

Matty: Thanks for the interest in us! Come watch us sweat a lot and tell everyone we’re great even if you’ve not heard us. Thanks!

JAYA THE CAT: Interview with the Drunk Rock Reggae Band