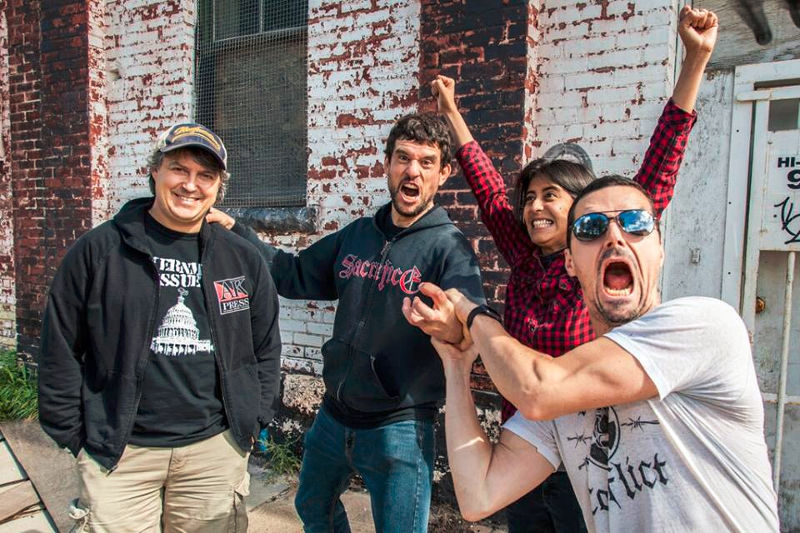 After Propagandhi just completed the first part of their tour to their new Album Victory Lap, we were able to talk to guitarist Sulynn Hago in an interview. Among other things, this makes it clear once again how much the band is anxious to think beyond the music about various processes in the world. Already in the past, the band has repeatedly championed more humanity, respect and tolerance in society.

But when it comes down to it, the guitar is the voice that reflects me the best, especially since I carry a distrust toward the flawed verbal language.

AFL: You’ve played a few shows in Canada USA in the last few weeks – how did it go and how is the response to the songs from the new album Victory Lap live by the people?

Sulynn Hago:The first two tours were awesome. We played a good amount of new tunes. There was a thrill in changing up the set that much. It was great to see people already singing along and responding positively to us playing them live.

Propagandhi had to fill vacancy and publish an invitation to tender in 2015 after the departure of David Guillas. How did you apply for it / what made you want to play for this band?

I applied by emailing about myself and my experience playing guitar in bands as well as sending videos of me playing a couple their hardest songs. Propagandhi are some of my favorite songwriters. I was attracted to the overall genre-less versatility of their music and of course their lyrical content and technical proficiency. I also wanted to play in a band with hard-working people who shared a deep commitment to morals, music and outcome of songs and shows — all while being people who don’t take themselves too seriously.

I mean Chris had said at the concert in Wiesbaden that this year is your first time in Europe was. Are there differences from the crowd and the mood in America to those in Europe at your performances?

I haven’t noticed a difference. No matter where in the world you are, you’ll either have the stand and pay attention to the performance crowd or the headbanging, go apeshit crowd.

You also sing some of the backup vocals in the band (eg: A Speculative Fiction – for me one of the biggest songs ever written). Would it be imaginable for you to sing a complete song as well as Todd does?

There’s a high chance that could happen at least with a song or two down the road. But when it comes down to it, the guitar is the voice that reflects me the best, especially since I carry a distrust toward the flawed verbal language.

Your songs are sometimes really very complex – I sometimes have the impression you make one song out of three on the end! How come – do you have a lot of jamming in the rehearsal room and then more and more new ideas develop or how does that work?

There’s a lot of time and attention put into the parts of the songs, which are written individually by Chris and Todd. It seems like they bring whatever they worked on privately to the jam space to iron out the details and structure until fully satisfied with the end result.

I was really surprised at the first run of your new album that the songs are mostly midtempo (the predecessor Failed States did a powerful big step forward. Is there a specific reason you took the tempo out?

Even when I wasn’t in the band, I could tell Propagandhi strayed from creating sequels of their previous records. I don’t think it was a conscious decision to write more mid-tempo songs. There’s a constant commitment to challenging oneself to try new things in songs, and the outcome displays that. To uphold that after a record like Failed States, it seemed like a natural progression to create a record with a less severe mood.

AFL: Propagandhi avoid festivals and locations sponsored by major corporations because of their critical attitude towards capitalism and rely on selected shows in suitable locations rather than nationwide appearances. Could you explain the attitude a little closer?

Music festivals can be full-functioning beasts without the backing of major corporations. Their presence takes over the actual purpose of the event, which is people gathering to enjoy live music. I know I don’t want to feel like an advertising tool or a Nascar car with company logos stamped all around me while I’m playing a show. Aesthetically and morally, major corporations have nothing to do with the music and message, and this band expresses that sentiment by not being involved.

AFL: You have a few online petitions on your Facebook page – it’s about the impact of Hurricane Maria in Puerto Rico. What exactly is the petition about?

Those petitions were about helping to supply aid to the people in Puerto Rico who desperately need it.

Okay Sulynn – I was really honored – we are looking forward to your next year in April/May for a few shows!

Thanks for this interview, Ole. See you next year.