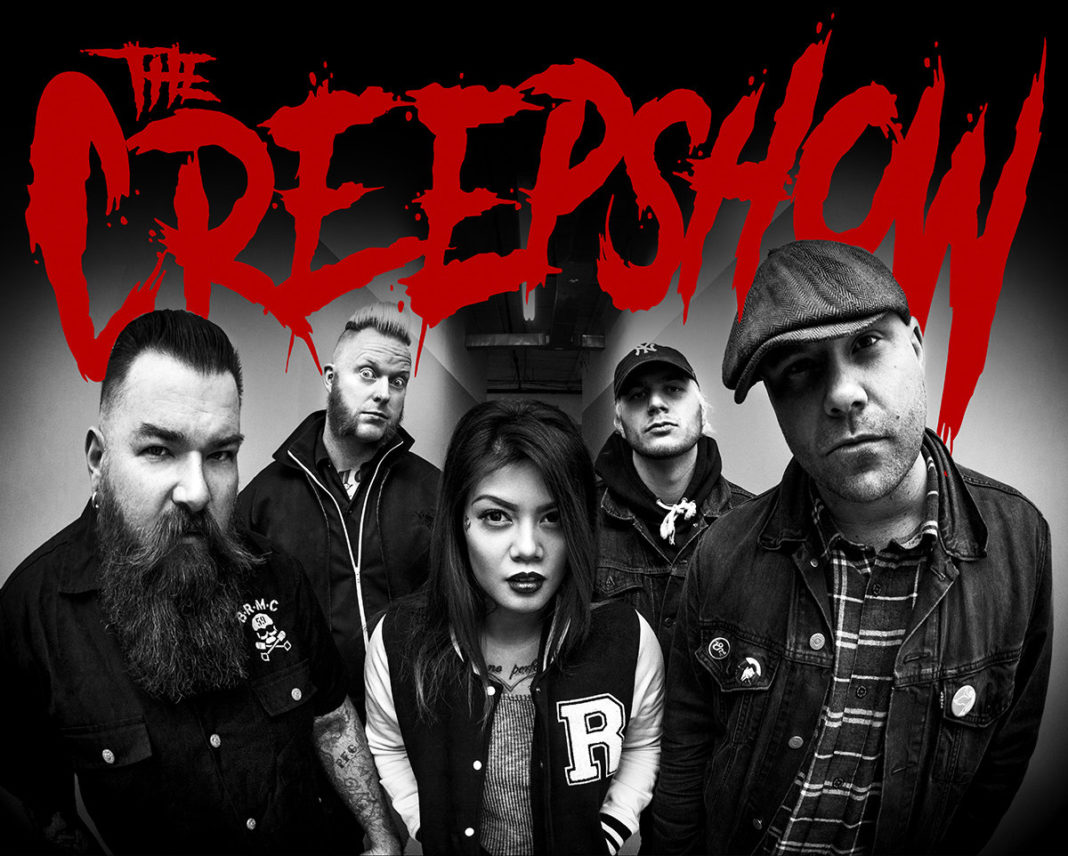 AFL:  When you guys started out, your music was mostly horror-themed. That became less and less over the years. How about the new album? Has it turned out darker again, or have you incorporated more personal content?

Ginty:  We`ve incorporated more personal content, but we`ve been trying to do that for a while now. The style of our material is still dark AND fun like it`s always been.

AFL: Where do you get the inspiration for your lyrics? Do you write songs as a collective, or is there a definite split in terms of distribution?

AFL: It is safe to say that you have changed your music since your change on the mic, although Kenda’s voice very much resembles Sarah’s. Was it hard for Kenda, always getting compared to Sarah, or was that never an issue?

Ginty:  I think it`s always hard, no matter how smooth the transition is. We were lucky that the fans took to her immediately, because it could have been a disaster.  I only recently found out that Black Sabbath had something like nine different singers! Wow, what a nightmare that must`ve been.

Sean: We never wanted Kenda to sound the same as other singers we’ve had. She had her own style going on and we really liked that.. We wish we had her from the beginning.

AFL: In terms of scene, you are kinda caught between two stools. Although I would categorize your music as Psychobilly, there are Rock’n’Rollers as well as Punks at your shows. Do you feel connected to or even part of that scene, yet? And what about Punk? Isn’t that kind of where your roots are?

Sean: We like that we can play a goth festival, then the next night play with some ska bands, then play rebellion punk festival. We all have different tastes in music and as pretty open minded.

AFL: Have you ever had to deal with allegations within the Psychobilly/Horror-scene? Because I think that especially this scene thinks in very strict boundaries in terms of mindset and appearance?

Ginty:  Hahaha! Of course. But it doesn`t matter what scene or genre we`re talking about, there are always people that love whatever that music is and always have an opinion about how true it is to what they love and care about.  That`s what have kept these scenes alive for so long.

AFL: You are constantly touring in the States, Canada, and you’re finally coming back to Germany in spring. Hopefully you’ll still have enough energy left for us!?

Ginty:  Ich verspreche dich! We love Germany, it`s one of our favourite places to play. The beer, the food and the people have always been amazing, so we`ll always come back!

AFL: Is there any song on the new album you can’t wait to play for a German audience?

Ginty: The title song „Death at My Door“ is a song we just finished getting ready, so we`ll be playing that one every night on the tour in March.

Sean: We always love playing new songs on tour, we’ll probably play about 4 or 5 off the new album

AFL:  “Death At My Door“ seems a lot slower than its predecessors. Only three songs really remind me of your early days. Which doesn’t mean the other ones are less good. I just asked myself, why?

Ginty: Hahaha! We`ve been bad about getting the right ratio of fast songs and slow songs on the same album together. The last album was the same, it had more fast songs and this one has more slow ones. Maybe next album we`ll get it right?,…

Sean: We don’t force things, we just write what comes out.. it doesn’t make sense to just throw a crappy fast song on there just to even out how many fast & slow songs there are.  The album is mostly mid tempo with a few fast songs and a couple of slow ones, which isn’t that different than our other albums. We’re super happy with how the songs turned out

AFL: You guys had a shake-up on guitar after “Life After Death.“ Chuck Choles replaced Daniel Flamm. Why the change, and where did you find Chuck?

Ginty: Daniel Flamm is a VERY busy guy right now! He`s writing songs for the biggest musicians in Germany. He misses playing with us, and we miss him too. Chuck has been a friend of ours since we were teenagers, so having him jump in was really easy. Whenever Daniel was busy Chuck would fill in for him, and now he`s a full part of the band.

Sean: So far we have … dynamo, Chu-chu , chuckles and Chucky bo Buckland . Still working on it….

AFL: Daniel still contributed a solo to the track “New Kings“… so you’re still on good terms? And what about the other ex-members? Do you still meet with Sarah, or her sister Hellcat, who sang for you in the early days?

Ginty: Ohh yeah, we`re still friends with Daniel. He bought me breakfast the last time I was in Berlin!

Sean: Yeah, and our original drummer Matt pomade is still a good friend of ours.

AFL: Do you have any last words four our readership?