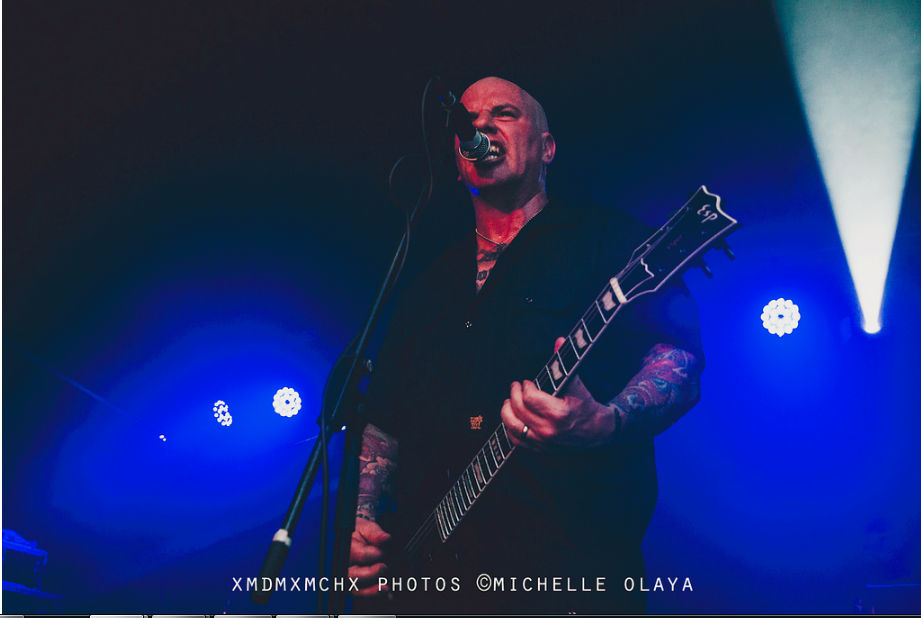 AFL: I’m here at Punk Rock Holiday 2017. I was able to sit down and chat with Craig Silverman Guitarist from SLAPSHOT and AGNOSTIC FRONT.

Craig are you currently playing in any other bands besides AGNOSTIC FRONT and SLAPSHOT.

Real punk and hardcore were never political, rather A-Political. There’s nothing less punk in my eyes than being entrenched in a political ideology, be it left or right.

AFL: Can you give us a rig rundown on Guitars, Amps, peddles etc. Are you sponsored by any equipment manufacturer?

Craig: Basically I use ESP Guitars. I use the Eclipse and Viper series guitars. For my amplification I use Blackstar Amp’s. I have a Maxon Overdrive Extreme that I use for a clean boost, I have a noise gate and a wireless system. Pretty straight forward. I’m sponsored by Blackstar Ampflication, ESP Guitars, Fishman Pickups and Dean Markley strings.

AFL: Is there a person from the Hardcore and Punk scene who especially influenced you?

Craig: The biggest influence on me, and without him I wouldn’t be doing this, is Greg Ginn.

AFL: Do you remember the first hardcore/punk record you got, and do you still have it?

AFL: Which Hardcore / Punk band is in your opinion the most underrated?

Craig: Underrated, like they don’t get the recognition that they deserve?

AFL: Do you remember the first show you ever played- first time you were up on stage.

Craig: High school talent show. I was a freshman in high school and played Screaming For Vengeance by Judas Priest (chuckles softly). That was the first time i was on stage.

AFL: What was your own best personal performance, to date?

Craig: Ha that’s a tough one. Best personal performance, well i can say this. The show that meant the most to me, and I played in a lot of bands over the years. When I was a kid, AGNOSTIC FRONT was my favorite band. First hardcore show I ever saw, first hardcore album I ever bought. Honestly I didn’t know anything after Liberty And Justice. I had gone on to other things. But Victim In Pain, Cause For Alarm, Liberty and Justice those are really very important records to me. So Ian McFarland, Bass player from Blood For Blood, called me up one day, and was „Hey AGNOSTIC FRONT needs a Guitar player: You want to play with them?“. I answered „yaah that would be kind of cool.“ Ian was like „Ok sit tight“, less than a minute late Roger Miret called me and said. „Alright go down and play with the guys“. I didn’t have to audition or anything. They knew who I was and I of course knew who they were. So the first time I played with them was the This Is Hardcore Fest in Philadelphia in 2014. To me when I was a kid AGNOSTIC FRONT was my Led Zeppelin, my Black Sabbath. So to play with them was just cool!

AFL: Have you received formal guitar instruction or taken lessons?

AFL: You’ve been on tour almost continuously this year, now on your current tour here in Europe. Is there a particular venue that you are especially looking forward to?

Craig: Thinking back, we’ve played mostly festivals so far. There was that place in the Netherlands, what was the name of it? Oh Podium.

AFL: what’s the special reason you looked forward to playing that show?

Craig: Yah you know shows are always insane there. SLAPSHOT has done well there since the first time they ever came over.

AFL: How do you choose which songs to play live?

Craig: That has little to do with me: I mean really especially being in bands that have been around for 30 years each. The set kind of figures itself out: there are so many songs that you have to play, it doesn’t leave much room for anything else. For example if you have 45 minutes to play in your set, 35 minutes is going to be mostly stuff from the first few albums. If we can play for over an hour like we get to play tonight then there will be definitely lots of new stuff.

AFL: have you ever been on stage and played the wrong song from the wrong band?

AFL: Not being the youngest guy on tour how do you stay in shape and keep your voice strong?

Craig: I bring some pretty serious resistance bands with me on the road: I have a portable cycle that i ride for an hour and a half every day. I have that for when I can’t get a gym. When I try to arrange with promoters, we’re not picky, but if you set me up with a gym we’re all good. I work out for about TWO hours every day.

AFL: And your voice?

Craig: I don’t smoke and I don’t drink too much. I basically try to take care of myself.

AFL: At this point in your career can you live off the music?

Craig: Yes. The reason that I can is because, my wife has a Job too. A real job and she supports us, and I get to do what I love to do. I make some money but I could not support my family doing this, and that’s for sure. I make enough to pay my end. For years I wasn’t making any money at all, not until 2010, and I’ve been playing in bands since 1985. So the first paying gig that I had was seven years ago.

AFL: Would you care to mention any new bands we should check out?

Craig: New bands, hum. My favorite new band is called Rhythm Of Fear and they’re from Jacksonville, Florida. They are a thrash band but they are soo good. They are in their early 20’s and we played a bunch of shows with them. Great Kids, great band, total throwback to the 1980’s and I’m a sucker for Thrash-Metal, I love it.

AFL: In view of recent acts of terrorism at concerts and other spectator events in Europe and most recently the attack on Gary Meskill from PRO-PAIN, Have you taken steps to tighten and elevate your own personal security while on tour?

Craig: I’ve always taken precautions. I grew up in an environment where you have to watch what’s going on around you. It’s situational awareness. I personally would not go out by myself alone in any city where I did not speak the language or be out that late. It doesn’t excuse what happened, but for myself I would not go out. Unless there are like three of them, we’re not going to go out.

AFL: Have you ever experienced a problem with groupies?

AFL: What things from the past would you like to have back in the scene today?

Craig: Less of the witch hunting BS that goes on today. Hardcore has become so soft as of late. Part of what attracted me to hardcore was the element of danger and violence. I was like wow, I’m fucking 13 years old and I’m not afraid of what’s going on around me. Look if you don’t like it don’t come. The only safe space is not to go. Punk and hardcore was never meant to be safe. Real punk and hardcore were never political, rather A-Political. There’s nothing less punk in my eyes than being entrenched in a political ideology, be it left or right. Everybody is welcome, until they do something that makes them not welcome.

Pretty much most of the bands that I’ve been in have been labeled fascist or Nazi. Hey I’m Jewish, someone calls me a Nazi,I take offense to it because I have blood relatives who died in concentration camps in WWII. Also what’s going on in America today is that there is no communality. Everybody wants to identify with something other than what it is. There is no unity anymore.

AFL: Are you pressured into saying certain things? Do you have to exercise restraint on the things you do and say publicly?

Craig: No I don’t have much to say. Look you do your thing I do mine. As long as you don’t hurt me, my family or anyone i care about, I don’t give a fuck what you say or do. But if you think you’re going to shut me because I’m in this or that band than how stupid could you be. Kids today are so reactionary. They read something online and think that it’s true. Like everything on the Internet is true.

AFL: Do you see a problem with sexism in the hardcore and punk scene?

Craig: Sexism exists everywhere. And sometimes it’s taken too far. Just like everything else, it happens in offices, subway stations, busses and malls. The shame of it is a whole band can suffer from it. I was in BLOOD FOR BLOOD, I know how it goes, it a shame when it happens.

AFL: Thanks for the interview. Is there anything you would like to add?

Craig: No. Thank you for your interest.

Interview with RISE OF THE NORTHSTAR – „May each one of...