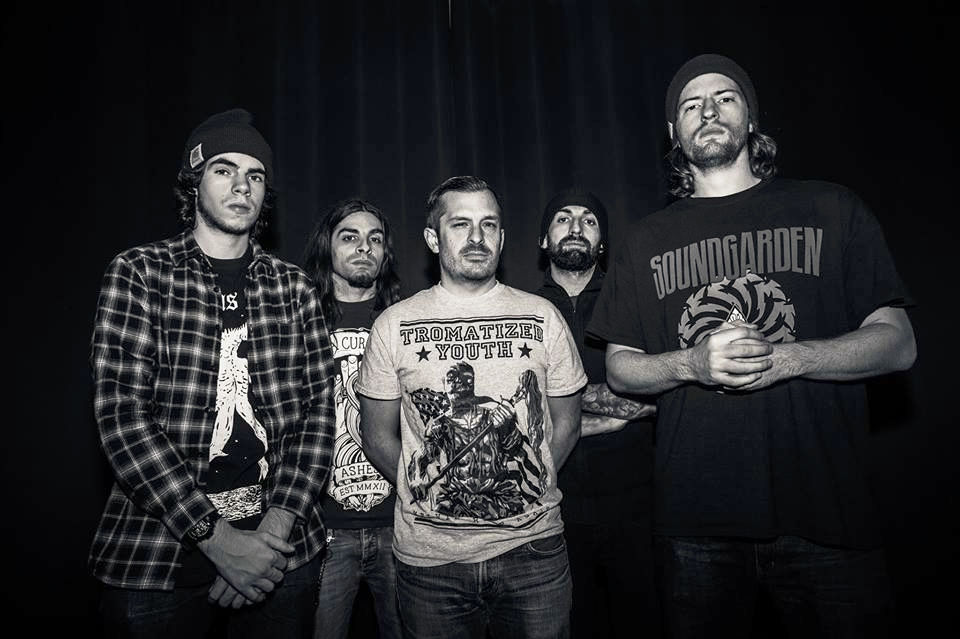 Mad At The World have released in fall 2015 their debut album Domination via Beatdown Hardwear. We could talk to singer Benoit about the new record and the future plans of the band in an interview. AFL: Hey there! How are you? You release in fall 2015 your first album Domination. How was the feedback to the record so far?

MATW: Hey! Pretty good thank you. Well, from what we’ve heard people kinda like this LP. But to me, we can do way more than this, and I can’t wait to record our next album.

AFL: You released Domination on the German label Beatdown Hardwear. How came the contact to the label?

MATW: Toni (the boss) sent us a message when we released the 2 tracks demo, saying that he liked it. We talked a bit and he was looking forward for the next record. When songs were ready we just sent him a pre-mix and he said “go for it”, that’s it! We’re happy about this, the LP and digipack looks great and it’s really the best deal we could have for this record!

DOMINATION by MAD AT THE WORLD

AFL: Your sound is not typical hardcore. In your songs is a huge 90ties metal and thrash influence. How came it? Listen some from the band more hardcore and some more metal?

MATW: It’s just because we’re old, haha. We never wanted to sound like 90% of all bands right now. Fact is a lot of bands are doing this mix nowadays too. Anyway, we’ve this obituary/all out war/machine head influence and to us it’s just logic to have it in our songs. We don’t force ourselves saying that we’ve to fit to 90s metal. We sound like this. Expect more of these vibes in the future though.

AFL: Which three words fit best to Mad At The World?

MATW: From the daily routine. I just speak about what I feel and how I survive in this crappy world.

AFL: You took with the song Low…And Behold part of the new AWAY FROM LIFE sampler. What describes the song?

MATW: Lyrically, it’s a lot about things that happened to me in my life. Musically, it’s really a song that we love, there are all the different parts that makes our sound.

AFL: Have you plans for a bigger Europe tour next year?

MATW: We’ll be on tour with STEEL NATION from the USA on May/June. We’re really proud about it! The tour is booked by Stronger Bookings. We’ll hit the Concrete Fest and also the Return to Strength Fest, 2 fests we really wanted to play. We also wanna see if we can make 9/10 before this tour, not easy with our works and stuff but I hope we can make it! Then it’ll be time to work on our next record.

MATW: I think you talk about hardcore, and well, I’m not really listening to all the new bands. I mean, I listen to (almost) all the new albums released, but after 1 time, then I’m coming back to my old 90s rock bands or actual rock bands.

AFL: Here are some tags. What do you think about it?
Football: Paris Saint Germain!
Straight Edge: Still!
David Bowie: Whatever.
Punk-Rock: Sometimes.
Sauerkraut: Haha, kinda like this!

AFL: What are you doing otherwise besides making music? Have you steady jobs or some special hobbies?

MATW: Like everybody or almost, I’m working full time as a computer designer. Keeping this job cause I can easily handle my vacations though. Playing basketball, cinema. All the basics!

AFL: Ok that was my last question. Want you add something or have you final words?

MATW: Thanks to you for the opportunity of being on your sampler and for this interview. Check out our last LP Domination. Buy it or download it, whatever. See u guys on the road!

Interview with Josh James of STICK TO YOUR GUNS.