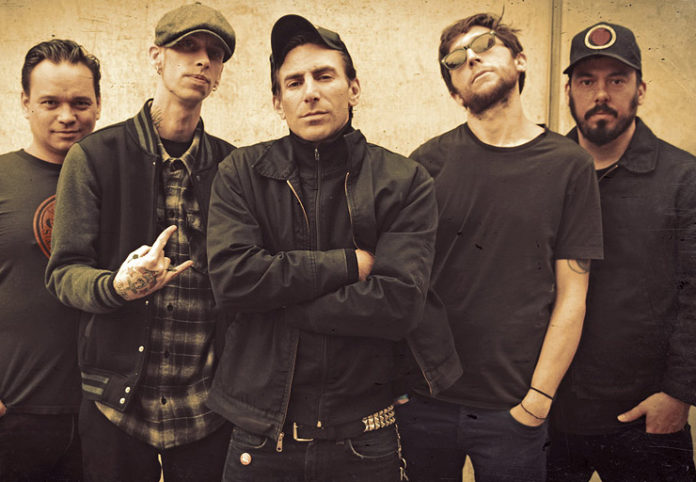 The Turbo AC’s celebrates 2016 their 20 year anniversary. We could talk during their current European tour to frontman Kevin in an interview about the re-release of their debut album Damnation Overdrive, their anniversary and pizza!

THE TURBO A.C.’S NEW ALBUM „RADIATION“ TOPS THE CHARTS! FREE PIZZA AND BEER FOR EVERYONE!!

AFL: Twenty years have passed since you released your first album “Damnation Overdrive”, which was sold out for a long time. At least until now, ´cause you have re-released your debut album for the second time. Again as a limited version – so it won´t be long until it will be sold out for the third time. Is there a reason for the limited versions?

Kevin: Well, at the time we released this, Blackout was a part of MCA records so we had all this legal bullshit to deal with. At first he album couldn’t be pressed in the US and had to be brought in as an import. So people at first thought we were from the UK or Sweden or something. It was a nightmare! After that we decided to maintain the ownership of the albums and only license them out to the labels for a limited amount of time. We thought the best way for a small band to get better attention to work with smaller labels in their own territory. So that’s how we did it. That’s why you’ll see double releases on different labels.

AFL: You have characterized your own style of punk rock, which has often been copied and so you have been named by bands as an influence in their music. You must be proud of it or are you simply saying “we only made music…in the end there isn´t more”?

Kevin: That’s amazing, and yeah, if that’s true, i’m very proud. I’m not sure if i understand the question correctly but one of the main reasons why i do my music is to contribute something of myself to the world. I’m not rich and i need to earn a living whether it be by my music or whatever but i have no idea how to do something that isn’t from my soul. So, if that’s been an inspiration or an influence to someone else then i’ve succeeded

AFL: You released “Damnation Overdrive” for the first time in the year 1996 over Blackout Records, which is known as a hardcore label and not as a label for punk rock music. How did that happen?

Kevin: Blackout was most famous for the Hardcore Bands but they had some punk bands too,l at that time, there was another band on the label called the Goops, they were a punk band with a female singer, we’re were all friends from the scene in NYC and they would come in to the restaurant i was working and i would do my best to give them free pizza. They asked me to fill in on bass for a tour they had, i think with the Lunachicks… the tour never happened but while hanging out with them i met the owner of Blackout and he asked me if The Turbo A.C.’s would be interested in recording a track for The Punk Rock Jukebox compilation which was punk and hardcore bands doing their favorite Punk rock cover, some really big bands were on this so it was a pretty big deal for us.We recorded Woman by Anti Nowhere league. They really liked it so they asked if we could do a 7″ too. They liked that so we did the full length Damnation Overdrive.

AFL: The new version of “Damnation Overdrive” includes three bonus tracks. Did we have to wait a long time until for new full-lengths of the Turbo AC´s to come out.

Kevin: The bonus tracks on this release are from recordings we did after Damnation Overdrive for another 7″ for blackout called Chupacabra.

AFL: Do you have another musical style which you like to play? And do you have other Bands except the Turbo AC´s?

Kevin: Yes, i do a lot of everything and i have numerous little side projects. Most recently I’ve been producing some reggae stuff down here. As a huge fan of that stuff is great to get into that. Also not long ago i did a trash punk rock’n’roll band called the Thunderfucks with some Japanese dudes. i played drums and wore a gorilla mask to hide the fact that i wasn’t Japanese. Haha… true story though, and good stuff. Look it up.

AFL: The Turbo AC´s are not known as a political band. One could even say that you´re an unpolitical band. Is that right and also intended? Isn´t punk rock music always political?

Kevin: Now i wanna sniff some glue, now i wanna have something to do…. Is that political? No… but it’s important. Important to punkrock. As i hope that The Turbo A.C.’s message is as well. It is intentional that we are not political, if we’re anything we’re punk rock soul music. Our message is pretty clear and. I think it’s one that can unify a lot of us, it’s that what you get handed to you in life ain’t good enough, you need to fight to get more. We need louder faster even if that sends us into the face of disaster.

AFL: You live and works on your own pizza parlour in Puerto Rico. What do the other members do? So what about your band rehearsal´s? Do you have some kind of skype-rehearsal?

Kevin: OMG! well we said it once in an interview and now we are a truly an „international rock and roll machine“ The way it works now a days is i write a bunch of stuff and send it to the guys who are now spread out between NYC, Newport Ri, Canada and Austria. They work on it on their own and when we get in the studio we just rock it. We’ve been playing together for quite some time now so this actually works. When it comes to rehearsing the live set, that doesn’t change much. So we all get together a week or so before the tour and hit the studio.

AFL: What is the best pizza Kevin could serve? A real punkrock pizza?

Kevin: Well i always try to pay some respects to punk in one way or the other. On my menu at Revolution you will find The Crucial BBQ (Murphy’s Law) the Milano Mosh (SOD) The Pamparius (Turbonegro) The World Peace (Cro-Mags) The Dictator (The Dictators) The Ready to Die (Andrew WK) … The Pizza Who Cannot Be Named (The Dwarves).

Just to name a few… this question could go on and on and on… so we’ll have to save that for a nother interview. But it was fun to work some of these Pizzas out with the guys in Turbonegro, Handsome Dick, and Andrew WK and Murphys Law even came down and played a show at my place!

AFL: You will tour Europe in a few weeks. Is there something you´re looking forward to the most? A very special place or festival?

Kevin: I just look forward to the tour, it’s been a while since we’ve been to Europe and i miss it!

AFL: Did you play a mix of all time classics at the shows or mainly songs from “Damnation Overdrive” because of the anniversary?

Kevin: We will be playing a lot of Damnation Overdrive that we never play at the shows! But yes, we will be playing our favorite mix of songs from all the albums as well as a couple new songs from the upcoming album Radiation!  I am gonna be doing a couple solo acoustic shows on this tour where i’ll be playing all of Damnation Overdrive in it’s entirety! That’s gonna be really fun, I haven’t gotten into those songs in a while and it’s really fun to do them acoustic!

AFL: When I take a look at your band pictures I always see you with very big cars. Do you drive a big block of your own or rather a Prius, skateboard or tram?

Kevin: I’ve always been inspired by the Kustom Kulture and Muscle Cars and Surfing but being a kid from the city growing up pretty poor and then running away from home to live on the street all those things we’re out of reach for me. I was always surrounded by drug addicts and people who we’re fucked up. I looked to those cars and life as some sort of salvation and the people around me would laugh at me when i would say i was gonna get out of the shit and be on the beach with my own 4×4 and little pizza place and playing music. Somehow i got here. So even though i bought a 70 challenger at one time (crashed it) and just just got a 4×4 87 Cherokee. I’m not really a Gearhead that can fix your car… but maybe Mike our drummer could. Hahaha

AFL: What do you think is the meaning of punk rock?

Kevin: Punk rock for me was/is so important to me. It’s something that transcends Race and Religion and brings us all together into unified pit of Chaos, Love, Blood and Sweat. It’s like all the Outcasts got together and formed a music that unified them with an energy that is real.  Punkrockers aren’t invited to the party where they play popular music for popular people… but we don’t care, we’ve got something better!

What would be your advice for the young Turbo AC´s, if you could travel through time?

Kevin: Hard to say, people sometimes ask if you could go back and do it all again knowing what you know now questions… but i don’t think i could. A couple wrong turns and crashes i think i could do without but i’m pretty happy where i’m at now so maybe it all makes sense, maybe i would say nothing.

AFL: If you could choose, what would be the newspaper headline tomorrow?

Kevin: THE TURBO A.C.’S NEW ALBUM „RADIATION“ TOPS THE CHARTS! FREE PIZZA AND BEER FOR EVERYONE!!

Interview with the hardcore newcomer BACKSWING