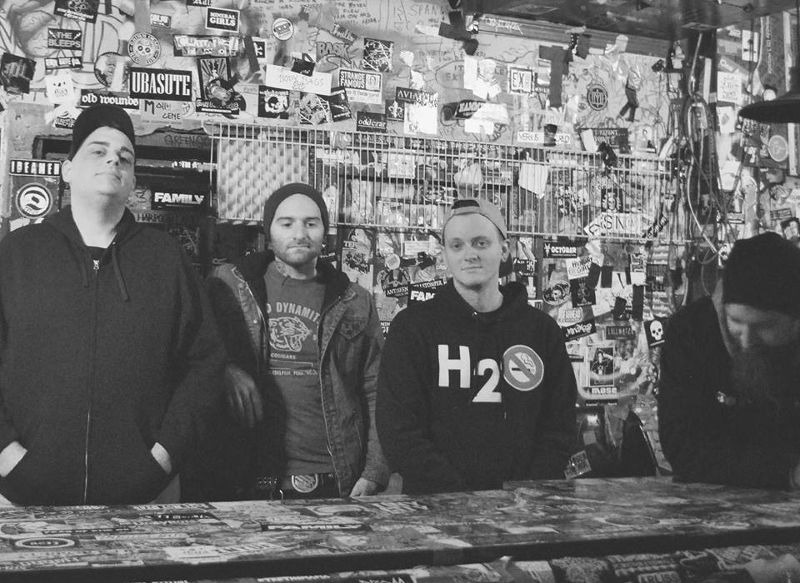 WX4: I’m Brian and I sing and play guitar. We played our first show Halloween 2009 but i had been writing and working on the songs since 2008. We are a four piece, Kyle(my brother) plays drums, Derek plays bass, and Ryan does lead guitar and backup vocals.

AFL: How came it to the foundation and the unusual band name?

WX4: Me and Kyle have done bands together since middle school, so when i had new songs put together naturally i talked to him about playing drums for it. Derek’s band was breaking up about the same time we were starting so i reached out to him to gauge his interest and he joined soon after.

We’ve had a handful of lead guitarists over the years and they each left for one reason or another and last May we met Ryan he played a southeast tour with us and joined after that. Our name is basically just a last resort. I had put together a list of 20+ names i wanted to use and then started searching Myspace, Facebook, and anywhere online that bands existed. Slowly the list shrank as i crossed names off that were already being used, and wolves&wolves&wolves&wolves was the one left standing.

AFL: Which bands and music do you count to your influences and how would you describe you music?

WX4: I’ve been influenced by everything I’ve ever listened to in one way or another. Some stuff I’m influenced to never listen to again. The bands list is extremely long but the ones I always go back to are The Clash, Hot Water Music, Rancid, Bruce Hornsby, Steve Winwood, Avail, John Mellancamp, and The Get Up Kids. It’s hard to describe our music, some people hear a definition and immediately think of one band, and they could absolutely hate that band so they won’t listen. I always tell people we are an energetic rock and roll band and when they ask who we sound like i say Foo Fighters, because who hates Foo Fighters?

AFL: Where else does the band usually get its inspiration from? Which themes you’re treaded? Do you write the lyrics together or is there only one responsible?

WX4: I do all the lyric and song writing, over the years the other guitarists have added some lead lines to songs, but as far as the structure and melodies that’s me. Friendship was the focus of most of Subtle Serpents, i had a falling out with a longtime friend and the feelings from that situation were the genesis of the band. Anger, betrayal, and anger. I had written so much about other people i decided to turn the microscope on me, where I’ve fucked up and went wrong.

AFL: You release your latest release SUBTLE SERPENTS in the year 2013. 2015 the German label GUNNER RECORDS release it for Europa. How came the contact between you and GUNNER?

WX4: We work here at home with a dude named Scotty and his label Death To False Hope Records, he helped us get some digital distribution for the album soon after we released is and some of the bands he’s worked with have released albums through Gunner as well. So one day he sends me a message and asks „You guys wanna go to Europe?“, and of course i said yes. Then we started talks with Gunner and got it all sorted out.

AFL: Is there any new record in pipeline?

AFL: On March and April you was on tour in Germany. What do you like at Germany and what not?

WX4: The hospitality was great, everyone we dealt with at shows, other bands, promoters, were all friendlier than we encounter here at home. People would always say hi and introduce themselves, that doesn’t always happen in the US, but it happened at every show we played. I dont remember one instance of having any kind of real problem, even with none of us speaking the language, we never felt out of place.

AFL: How was the tour in hindsight and what was you personally highlight of the tour?

WX4: Can’t wait to do it again next year, it was amazing. Too many highlights to name just one, getting to spend a week in Barcelona, seeing all the ancient ruins across Germany, getting yelled at by homeless people in France, the tour as a whole was amazing start to finish.

AFL: In Germany are a lot American bands quite hot and come to touring Europa. Which unknown bands can you recommend?

AFL: What was your personally highlight of your musician career? Since your foundation you share the stage which quite popular bands how THE MISFITS, GUTTERMOUTH or the ATARIS. What was the best show for you?

WX4: The highlight so far has been touring Europe, it’s still a little unbelievable to me that i got to do that. The best show I’ve ever played was probably 15 years ago with one of my old bands, it was a hometown show everyone was dancing and singing along. One day i want Wolves to have a show like that here in NC.

WX4: Almost People – The Wire EP, The Fire Theft – The Fire Theft, Rancid – And Out Come The Wolves, Avail – Over The James, Gasoline Heart – Thanks For Everything.

WX4: I’m primarily focusing on Wolves at the moment, the other guys have full time jobs their weeks are preoccupied with, but i play ice hockey from time to time, i had to take a season off to do the Europe tour but i was willing to make that trade.

WX4: Thank you Away From Life for the support, Gunner Records for the opportunities, and we will be back in 2016 Europe. Peace.

Interview with the hardcore newcomer BACKSWING