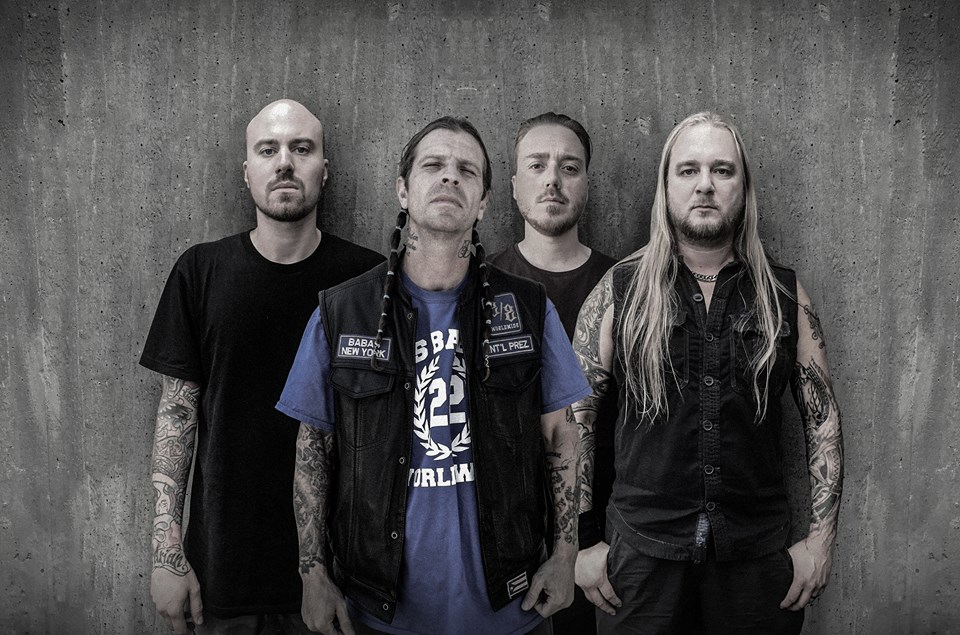 AKANI is a metal-hardcore band with members of like Merauder, The Haunted and Entombed AD. We could talk to AKANI drumer Anders Löwgren in an interview about their upcoming album „Through My Darkest Infernal“ which will be released on July 2016 via Demons Run Amok Entertainment and more interesting things about the band.

Interview with AKANI to their new album „Through My Darkest Infernal“

Truth is, we never practiced. All members haven’t even been in the same room together yet!

AFL: Hey Anders how are you? You will release your new full-length “Through My Darkest Infernal” in July 2016. How satisfied you’re with the record and how distinguish the new LP from your older releases in your opinion?

Hello, I’m good! We’re super excited to get this album out, it’s been a trip making it for sure. Everyone was involved and put great ideas to the table. We worked really hard on this album but I think the whole recording process and everything went smooth despite the distance between us. We wrote the majority of the songs within a few weeks and we were all in a kind of in a dark, heavy and emotional state in our lives at the time and we felt that AKANI was a great outlet and platform to express ourselves.

The sound didn’t really change much from our first EP, I had a pretty clear vision of how I wanted it to sound from the beginning and there were never any strict rules on what kind of riffs or parts that wouldn’t be right or wrong. We’re fans of music and most genres and we want to try different paths and influences. The result is a great mix of 14 tracks from slow doomy tracks with big open riffs to fast thrashy songs with heavy breakdowns. Jorge’s vocals on top of it just makes it perfect, in my opinion!

It’s like you’re entering a big dark hole or goin through purgatory and you won’t feel ok until you get out on the other side, hopefully with a clearer mind, you know?

AFL: How would you describe your sound and which three words fit best about AKANI in your opinion?

It’s definitely a big dose of heavy metal and bonecrushing hardcore! There’s a pretty obvious red line from our previous/other bands and projects but to describe AKANI in three words…? Hmm, Tribal, spiritual and HEAVY.

AFL: What are your main influences on this album?

I think our main influences for this album came from within ourselves and from each other. We fed of each other’s emotions at the time and just kind of let go of the demons we had in our minds at the time. It might sound weird but that’s how I feel about the whole process when I look back at the writing and recording sessions. Speaking for myself, ideas doesn’t really pop up in my head every day, it can take months and months before I even pick up the guitar. When we started writing for “Through My Darkest Infernal” it was the right time when the songs and riffs just came to me… I wrote about 9 tracks in 7 days straight. It’s like you’re entering a big dark hole or goin through purgatory and you won’t feel ok until you get out on the other side, hopefully with a clearer mind, you know? The other guys definitely went through the same kind of state and we were in this together. We needed this, it felt like group therapy in a way…

AFL: Your lyrics are often critical and forthright. How important is the message in your music for you? Which themes do you treat on “Through My Darkest Infernal”?

Jorge is a guy with a lot on his mind and he’s very spiritual guy searching for the “truth” or his roots through some of the songs. There are some more aggressive straight forward songs were he’s just clearing his mind and there are some songs with a more political tone. Hardcore music to us was always about getting aggressions and emotions out and lyrics plays an important part. My favorite lyrics on this album are the words he wrote to “New World” and “Temple Of Lies” which are pretty much dealing with the current state of the world where we exploit our nature and kill each other in the name of organized religion and greed.

AFL: “Through My Darkest Infernal” will be released by Demons Run Amok Entertainment. How came the contact between you and the German label?

I knew Marcel (Demons Run Amok) through my other band Dead Reprise, he released our LP “Dystopia” and I just like his way of being simple and straight forward. There’s no reading in between the lines or any bullshit. Just straight up hardcore, we share the passion for the music and the DIY ethic… He put out our first EP that sold out pretty quick so we wanted to continue with DRA for this one.

AFL: With your new video to your song “I Won’t Run” you’ve released the first video clip of “Through My Darkest Infernal”. Why you choose exactly this song for a new video and about what is the song & the video?

This is the only track that Daniel Cederborg wrote and we all think it’s one of the strongest tracks on the album, without a doubt! He’s a great songwriter but he came in and joined us bit late in the writing process so…. I can’t wait for him to deliver more riffs to the next one! “I Won’t Run” pretty much sums up AKANI’s sound, it’s heavy as fuck but catchy at the same time. We were all blown away when Jorge sent us the first vocal demos to this one and he killed all our expectations and took it to the next level.

I’m really proud of everything Jorge did on this record cause he went through some pretty turbulent months and personal issues. He really pushed himself and tried new ways to sing without any pressure from us and it came out amazing! It’s an honor to have Jorge sing on my tracks, I grew up listening to Merauder and even tattooed the “Master Killer” artwork on my arm like 10 years ago and way before I met him. The video is very DIY, in fact everything is recorded on my iPhone on different locations in Bay Ridge & Brooklyn NY, Gothenburg and Örebro Sweden. It’s pretty much a simple performance video. The song is simply about not turning your back and stand up for yourself and your family.

AFL: Aside from your music, I am a big fan of your cover-artworks and the artwork of your new record is fantastic. Who is responsible behind the ideas of the artwork?

Thank you! I always thought that the visual aspect of a band is important and we really nailed it with our first EP “Santa Muerte”. I got in touch with a Indonesian guy named Adi Kalinga who I found out about through some art site. He had made some shirt designs for some well-known metal bands and I liked his style a lot. He really captured the darkness with great details in black and white that fit our music perfectly. We wanted him to design our new album artwork as well and he started but kind of “hit the wall” and was going through pretty heavy depression so I didn’t want to push him, sadly we had a deadline and had to move forward. My good old friend Marc Strömberg finished the job and killed it. The cd is full in full color and the vinyl is black/red, came out really nice! He’s great artist who plays in some bands including First Blood but mainly works in the art scene doing graffiti, paintings and merchandise. Hopefully he will make us some nice shirt designs in the future as well!

AFL: Your band is coming from Brooklyn (USA) and Gothenburg (Sweden). A far distance! How you can manage the band? Where do you practice and how often?

Truth is, we never practiced. All members haven’t even been in the same room together yet! We been friends through music and met at different times on the road but this band is mainly working over email and the interwebs. Our plan is to get out and do live shows, when the time is right. We’re not stressing about it…but definitely looking forward to it!

You would be surprised when you saw our music collections, we like a looot of stuff. Personally I’m digging the new Beyonce album “Lemonade”. My friends and employers in Hatebreed just released a great album called “The Concrete Confessional”. We all like the latest Slayer album! Me and Daniel C. are into the latest Bring Me The Horizon and Deftones plus some new hip hop shit like Kendrick Lamar. There’s new music coming out all the time but honestly, I think most of us are sticking to our old classics, it’s very rare that I get into a new band. Actually Jamey Jasta just turned me on to a great new death metal band from California called Skeletal Remains, they’re haaaard! One of the few “new” hardcore bands that I really dig is Harm’s Way from Chicago.

AFL: What plans have you next with AKANI? Is there a European tour in pipeline?

Right now we’re just waiting for the album to come out and we’re all pretty busy living our lives working, taking care of our families and moving houses etc. Jorge got a lot of work finishing up the final Merauder shows this year and I’m hoping to catch one of those shows! AKANI will definitely write more music and hopefully we’ll hit the road one day. There’s been talk about doin something in the fall but we’ll see. Like I said, when the time is right. We do everything on our own terms, no pressure. We’ll prolly make a new video in the near future.

Slayer, Hatebreed, Sepultura, All Out War, Earth Crisis and AKANI. That would be a great package. Worldwide.

Thanks for your time and for checking us out. If you’re interested in what we’re about, follow us at facebook.com/AKANIofficial and www.AKANIband.com. Pick up the record and some merch, spread the word. Love and respect. Peace!