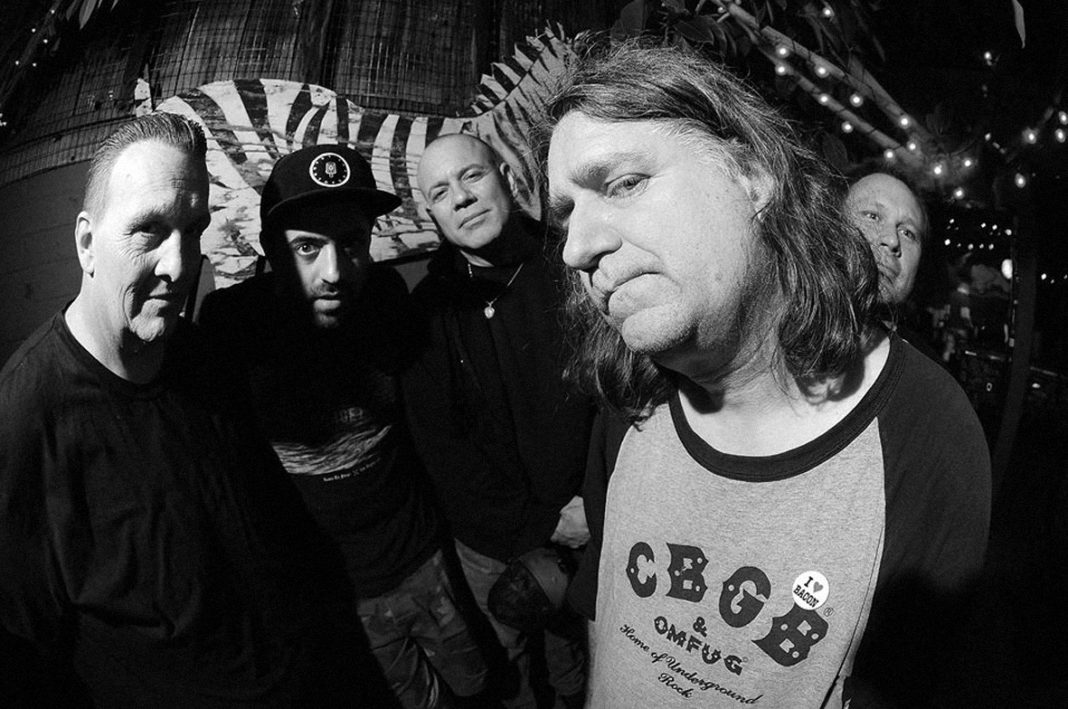 Interview with the ADOLESCENTS singer Tony Reflex to their new album “Manifest Denisty” which will be released in July 2016 via Concrete Jungle Records.

AFL: First of all, I would like to congratulate you for your great new Album “Manifest Density”! It is awesome and I have the feeling that the ADOLESCENTS are getting better from year to year like a good wine.

AFL: It´s been 35 Years that your self-titled debut LP has been released and that isn´t a short time. Do you have a secret to keeping your music so energetic? And do you have an Idea why so many other bands lose their feeling for their roots?

Tony: It’s like Joan Jett says…. I love Rock ’n‘ Roll. I am lucky to have friends that feel the same way. One thing has been a constant, and that is the love of rock and roll music. I don’t know why other bands lose their roots, but people have suggested that I have lost min- which is funny to me as I still pretty much just listen to the beatles, kinks,cheap trick,  buzzcocks, stooge, and ramones in regular rotation- just like I did in the 70’s….

AFL: What is the meaning/message of “Manifest Density”?

Tony: I don’t know that there is a specific message, but the term “Manifest Density“ is a play on the term ‚Manifest Destiny‘ (the 19th-century doctrine or belief that the expansion of the US throughout the American continents was both justified and inevitable.) It also references the Monroe Doctrine (a principle of US policy, originated by President James Monroe in 1823, that any intervention by external powers in the politics of the Americas is a potentially hostile act against the US) and it’s continued use in American foreign policy and its aggressive 21st century political action. My intention is to draw a parallel between past US policies, and the current state of the USA. For all of its claims to the contrary, the United States has become increasingly paranoid and Ameri-centric.

AFL: Your lyrics are often critical and forthright. How important is the message in your music for you? Can you imagine to write non-political radio music for the masses?

Tony: I’ve never been exceptionally prolific in writing silly love songs, even though it’s a beautiful thing and I enjoy them. I don’t think singing songs about my wife would be all that interesting to anyone but me….. she wouldn’t even be interested, so it’s kind of pointless. There’s nothing about our friendship that needs changing. But there are many things about the world that need changing, and I have no problem pointing it out. The message is the song, the challenge is to make it memorable and catchy enough to get people to think about it. I grew up listening to protest music on the ardio, so the idea of political music being accessible to mainstream audiences isn’t problematic…. except that it just doesn’t actually get played on the radio.

AFL: When I look back, THE ADOLESCENTS were very active in Europe in the recent years. Are you as active in the states or is your focus on Europe? And if your answer is yes, how did that happened?

Tony: Oh sure, we are active everywhere, but our focus in live shows in the summer has been in Europe and the United States because those are the biggest places that take the most time to tour. I have to arrange tours around my job obligations t home where I am a teacher. at the beginning we toured summers in Europe mostly because people told us it couldn’t be done. We were always told not to because people are on holiday, and because of the World Cup. Now it seems as if everyone from the USA goes in the summertime…

AFL: „Manifest Density“ is the fifth release on CONCRETE JUNGLE RECORDS and it looks like you´re very satisfied with  your partnership. What is the reason that you work with a smaller German label? Or is it just familiarity at this point?

Tony: We were approached by People Like You to do a record but I didn’t think that was a good fit, and they told me about Concrete Jungle. That was better fit for us. They understand our goals, they know our situation, and they like our music. So, yes, we are very satisfied. They may be a small label, but they have the biggest punk rock band from my neighborhood.

AFL: Aside from your music, I am a big fan of your cover-artworks and the artwork of “Manifest Density” is fantastic again. Who is responsible behind the ideas of the artwork?

Tony: Mario Rivera from Madrid. He’s awesome. We met Mario a few years ago when his band MULETRAIN played on a couple of shows with us. He did an incredible poster of Santa Claus with a punk in a headlock. It was so cool that when we were looking for an artist to do a record I sent him an email and asked him if he could do it. He has done all of our records since then. he’s my favorite artist and has a good focus on what we are doing. I run a couple of ideas past him and he has the vision to bring it to life. He is an immensely talented artist and musician.

AFL: You played your first gig when I was a little child and you can see people at your shows who were perhaps conceived at one of your shows. What is your feeling, when you look into the crowd and you can see patrons, in age from 12 to 70? Do you feel old at that moment or do you have a sense of pride?

Tony: I am proud. Our music is meant for everyone- not just for the kids-  but also for the people who grew with us over the last 35 years. I try to keep the lyrics complex enough so it’s interesting for everyone.

AFL: Do you still have the same feelings as in your beginnings as musicians, when you are holding a new LP in your hands for the first time?

Tony: I like the smell of paper and vinyl, so, yes. I always wanted to write a book, but i don’t have the time and motivation. I’ve been able to use the music medium to tell my story, so it’s like my life story in puzzles and pieces. ach record becomes a new chapter. so, yes. It’s still exciting.

AFL: You have seen the scene change over the decades, how do you see the scene these days and do you miss some things in the scene of today?

Tony: I can’t really say I miss anything concrete and tangible, but I do miss my own sense of wonder, and innocence, and naivete. There are many friendships and people I miss as well.

AFL: Is there a question which you never heard and you would like to answer?

Tony: I have never been asked, „Do you like Green Eggs, and Ham?“ and always wished I had been. My answer is, of course, “ I do! I love green eggs and ham!“

AFL: What is your favorite song on „Manifest Density“ and what is the main reason for it?

Tony: Jacob’s Ladder sums up my life pretty well. I feel like a rat on an exercise wheel. Always going somewhere, but not really moving.

AFL: The OC-scene of the 80´s must have been exhilarating – so many great bands in one region. Do you mourn over those times or do you think that many people simply glorify it because it wasn’t such a great time as many people say?

Tony: Oh, it was a great time. we were friends, and young, thought we were invincible- and we were completely out of our minds. creative, curious, enjoying each other’s music and friendships. no competition. what’s not to love about that?

AFL: Are you still in contact with friendly bands from that period?

Tony: Oh yeah, sure. We are all still friends and many of us have known each other since the late seventies. Agent Orange, Social Distortion, DI, TSOL! Among others, of course. All still making great music and playing live shows.

AFL: Today you have to play many shows to earn money with music. This fact isn´t easy to combine with family life. How do you deal with that or do you have a full-time job and the music is just a hobby?

Tony: I have been a teacher for 25 years.

AFL: What was the reasoning behind adding your 2012 EP “American Dogs in Europe” on “Manifest Density”?

Tony: Concrete Jungle chose to discontinue pressing the EP. We wanted to make sure the song American Dogs was still in circulation.

AFL: On “Manifest Density” you worked with Paul Miner, (whose work I appreciate). How did the collaboration with him come to be? And how long long have you known him?

Tony: Steve and Mike have worked with Paul and so when we needed to record he was called. He’s so talented.

AFL: I have found a video on the internet called „Mr. Ed Puppet and Sierra Madre Elementary Puppet Show“. What´s it all about? Are you active politically and in the school of your children?

Tony: I was protesting the way a school board member had treated my family. I have always been an activist and advocate in education. Never thought I’d have to defend my own children.

AFL: If you could choose, what would be the newspaper-headline read tomorrow?