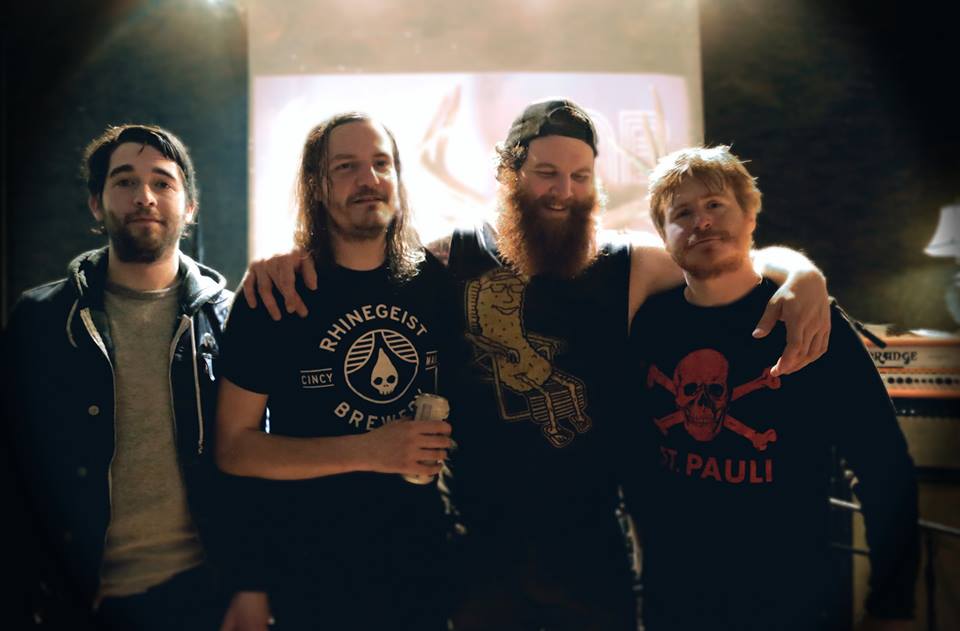 AFL: Hey Guys! How are you? Firstly thank you for taking time for an interview. Please introduce short yourself. Since when do you make music together? How many members you are and so on?
We are Dan Webb : Vox /Guitar – Chris Amaral : Guitar / Vox – Sean McAllister : Bass – Stephen Benson : Drums

This lineup has been together for a little over a year, but the band has been around since 2009, and Chris and I have been in it from the beginning.

AFL: How came it to the foundation and the unusual band name?
Years ago I played drums in a band with Chris and another fellow named Vera( who has also recorded some of our records and filled in on bass for us over the years) and I began to write songs on the side. Anytime I would book the practice space to work on these songs with other folks, Vera would always jokingly ask if I was having „Dan Webb and the Spiders“ practice. Once I wrote enough material to make a record I got my friends together to help me play them live and that’s how it got started.

AFL: Which bands and music do you count to your influences and how would you describe you music?
We all bring our varied tastes to the band. Amaral has great pop sensibilities and great song craft that he picked up from the likes of Paul Westerberg and the Beatles mixed with a love for hardcore punk like Blag Flag. Sean comes from the hardcore world but has the chops and range to play any style of bass, from soul to pop to hardcore. Stephen an encyclopedic knowledge of all the classic rock greats like Thin Lizzy and is also likely the best guitar player in the band. I grew up on Nirvana and punk rock like CockSParrer and love low-fi stuff from early Modest Mouse to the great Jay Reatard.

AFL: Where else does the band usually get its inspiration from? Which themes you’re treaded?
We love great pop hooks and catchy melodies presented with some grit and aggression. Also, I watch a lot of films and read a good amount and I find myself constantly stealing the best ideas from those mediums as well.

AFL: You release your latest release PERFECT PROBLEM last year. The German label GUNNER RECORDS releases the album in Europe. How came the contact between you and GUNNER?
We released our first two albums by ourselves. The release of OH SURE in 2010 got some nice write-ups in Maximum Rock and Roll and Razorcake which caught Gunnar’s eye. That coupled with the recommendation of our mutual friend Jeff Rowe prompted Gunnar to reach out to us and see if we’d like to work together. Since then the Gunner Records crew has been super awesome and released 3 full length records and a 7 inch with us plus put together 5 amazing tours. We owe them everything!

AFL: You were also on tour in Germany. This year already for the second time. What do you like at Germany and what not?
There’s not a lot we don’t like about coming over here. Every date we play there is someone there to take great care of us. They feed us, they house us, they make sure we have drinks. They are just super nice in general. There is no such safety net in the US. And on top of that, we are such a low level band, there isn’t usually a huge return for them on treating us so well. It’s more than we deserve and we’d humbled each time it happens.

Also the people that come to shows seem are great, some are there just to slam around to loud music and others are studious and learn words before he show. We play to bigger crowds here generally, which is great. Also since we have been coming back again and again we have built great friendships and they keep coming back year after year. Also we picked up a pretty serious Kicker habit during our time over there and we certainly appreciate that.

Perfect Problem by Dan Webb and the Spiders

AFL: How was the tour in hindsight and what was you personally highlight of the tour?
This tour was our best one yet for sure! Attendance was great almost across the board…we even had some shows sell out! Which is new ground for us. It was way less of a financial disaster than previous ventures. The highlight for me was Berlin this year. It is such a great treat to visit the Flo at the Ramones Museum and play a small acoustic set early in the evening then jaunt across town to a capacity crowd at another venue.

AFL: How distinguishing the German visitors from the US in your opinion?
Germans seem more likely to engage with new bands. Even on our first tour we had shows with good attendance and people who sang along. From a promotion side, the people we work with in Germany are much more interested in our well-being. as a whole I would say that Germans respect music more than in the states. Musicians are treated so much better on our low level.

AFL: How does your audience look like and which people do you miss on your concerts?
Our audience varies night to night, but the core of it is older punk rock folks. We don’t tend to draw super young kids. We tend to connect with people more our age that have grown up in punk rock.

AFL: What are your favorite records at the moment?
This week I’ve been listening to the Arrivals, Thin Lizzy, and Blaze Foley.

AFL: What are you doing otherwise besides music? Work? Hobbies?
We’ve all got various jobs that we use to pay for this band. I’m excited Baseball is back in season. I’m also working with Gunner Records to try and get Gunner Records USA up and running so we can make some of those records available over here.

AFL: What are your plans for the near future and where do you see yourself in 10 years?
We’re writing new material for another full length. We plan on splitting up the recording sessions like we did last time so we can take the songs to specific studios that fit with what we are trying to do. I expect that we’ll return to Germany for a tour either later this year or early next year. In ten years it’s tough to say. I don’t expect this band will still be around and active. It becomes really complicated as you get older to get people to make time for a project like this that doesn’t have a financial payoff. We’ve been really lucky to be able to do it for 5 and a half years.

AFL: Final words and greetings?
Thanks so much for taking the time to talk with us. We appreciate the opportunity to chat!