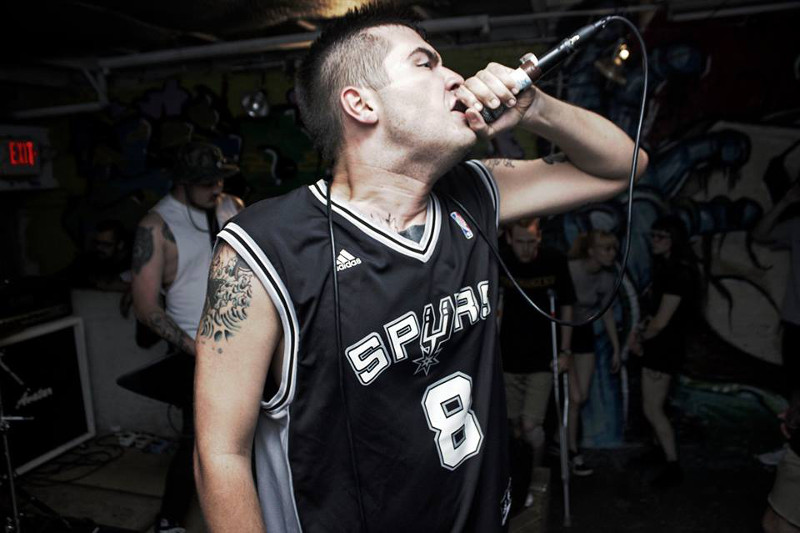 AFL: Hey Guys! How are you? Firstly thank you for taking time for an interview. Please introduce short yourself. Since when do you make music together? How many members you are and so on?
My name is Patrick. I’m the lead guitar player and second vocalist of Hardside. We’ve been making music since 2009. Right now we have four main members. Me, Zane, Ely and Travis. We usually always have our friends fill in for whoever can’t go on tour at the time.

AFL: How came it to the foundation from HARDSIDE and did you play in other bands before?
I was in a band called Results/Worlds Below at the time of creating Hardside. I was also touring and playing for Bitter End around this time. Ely was a member of Bitter End then. Zane was booking shows at the time and wanted to start a band. So I wrote a couple of songs and our friend Tom wrote some as well.

AFL: Which bands and music do you count to your influences and how would you describe you music? Which three words fit best to HARDSIDE?
I’d say we’re heavily influenced by Leeway, Biohazard, Cro-Mags, No Warning, Stigmata, Bitter End and very much by Pantera.
Three words:
1. Bad
2. Boys
3. Chillin

AFL: Where else does HARDSIDE usually get its inspiration from? Which themes you’re treaded in your songs?
We’re very much influenced by our personal lives. All of us are different. The music is what brings us together. Most of our songs deal with struggle and broken relationships with friends and family. And just circumstances of every day life. We all need an outlet and I know music is my strongest outlet.

The music is what brings us together. […] . We all need an outlet and I know music is my strongest outlet. (Patrick Flanigan)

AFL: You release a summer tape last and your debut album ‘THIS IS PUNISHMENT’ is already three years ago. Is there any new full length in pipeline?
Yes. As a matter of fact we recently finished our new LP called ‘The Madness’ which should be coming very soon.

AFL: You were also on tour in Germany some year ago. This year you’ll come to Germany while the upcoming European Tour a second time. What are you looking forward most and what were your experiences the last time you visit Europe?
Very much looking forward to seeing some friends we made last time. As well as making some new friends. The food and sights are all awesome too. So many different countries and lifestyles.

AFL: The trip will be together with BORN LOW and DEAD WEIGHT. How came the plan to play the tour together?
Well our first full US tour was with Born Low and we consider those guys good friends. So any time spent with those guys is a pleasure. As far as Dead Weight, I believe the booking agent added them. I did listen to them and they sound very heavy. We’re looking forward to playing with them.

AFL: What kind of shows do you usually play in the US? When I watch videos in YouTube I see mostly shows that aren’t in a club but in a school gym or something like that. Why this?
Well we play shows wherever they are booked. In some cities it’s probably cheaper or easier for the promoter to book a show somewhere besides a club. I imagine they book wherever is best for the show.

AFL: Here are some tags. What do you think about it?
Well speaking for myself.
Russia: Cold
Straight Edge: I am
Religion: To each their own
Punk-Rock: Hardcore
Sauerkraut: delicious on hot sandwiches

AFL: What are your hearing at the moment and what was in your opinion the best record of last year?
I just heard the new Beautiful Ones record and that is my favorite at the moment. And my favorite for last year is Mizery – Survive The Vibe. Thats band is fucking badass.

AFL: What are you doing otherwise besides music? Work? Hobbies?
I work at a grocery store so it’s pretty boring. I’m currently trying to get into acting on TV shows and movies.

AFL: What are your plans for the near future and where do you see yourself in 10 years?
My plans for the near future are just enjoying life and spending time with friends and family. In ten years I hope I can be some what successful at acting so that I can start a hardcore label. I think it’s important for this movement to stay alive for future generations to have an outlet that’s not dictated by people just trying to make money off them.

AFL: Final words and greetings?
Look out for ‘The Madness’ coming soon as well as our first music video which I’m excited about. And also listen to Afflictive Nature, Drown, Will to Die, Bloodhound, Mind’s Eye, Shadow of Doubt and Point Blank. And prepare your fucking ears and ass to be caved in by the new Bitter End record ‘Illusions of Dominance’.