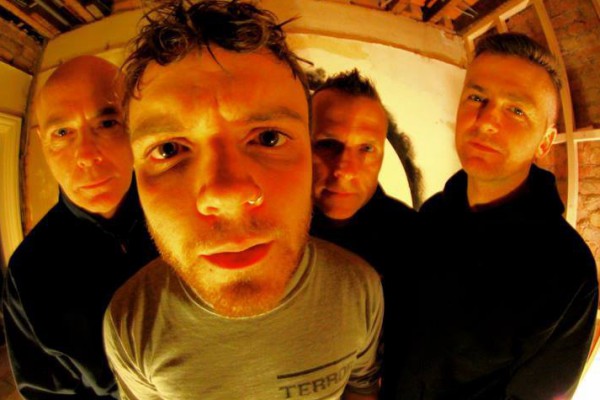 Epic Problem is a punk band from England which founded in the year 2011. Guitar player Mackie was a founding member of the legendary punk band Blitz. InDecember Epic Problem will play 5 shows in Germany. We could talk before with Jake and Makie in an interview.

Epic Problem have been a ‘proper’ band since late 2010/early 2011 although it was conceived as an idea between me and Mackie before then. Mackie turned up at my Dad’s house (Where I was living at the time!) one day out of the blue, Quickly introduced himself and handed me a cassette tape and asked if I’d track some vocals over them to see if it could be made into a band…
The main problems I had at the time were, A. I’d never done lead vocals in a band before, and B. I Didn’t have a cassette player! Haha!

The latter problem was easily sorted, the former took a bit longer (As you can probably hear in our very early stuff). Shortly after these first ‘Demos’ We recruited a Good friend of Mackie’s: Morri on Bass, and Greg on Drums. The rest is History!

AFL: In the beginning of December your small German tour with 5 shows will start. Are you looking forward? Is it the first time of you visiting as musician Germany?

Jake: I seriously can’t wait; it’s my only holiday of the year! I personally have been to Germany quite a lot over the years, first time at the age of 16 with a band called “Kamikaze Sperm” in 2007, and pretty much every year since then With various other bands and also on holidays etc. I know how great it is over there!

AFL: The tour was booked by Subkultura Booking. How came the contact to Subkultura and you?

Jake: Nico from Subkultura contacted us a while ago, it was supposed to happen earlier but we’ve had all sorts of trouble over the last year or so with drummers so we’ve not been terribly stable! We’ve got a solid lineup now and we’re eager, so it came at the right time!

AFL: Since your foundation you release a lot of records but “just” 7” or splits. Have you plans to release a full-length the next times? I saw also that you release all songs between 2011 and 2014 on a CD. Cool Idea!

Jake: The decision to release singles and splits came naturally really, the problem with the afore mentioned instability with lineups etc meant that to keep momentum up we had to stagger releases etc, and also meant that the recording etc could be done quickly and relatively cheaply.

Doing a full length LP is in our sights but when that will happen I don’t know.

The decision to release only records/digital rather than CD was mine – I personally love records, I feel they have more worth to a band but of course it came to a point where we needed something with all our releases on them, mainly because records go out of print a lot quicker, which is why we did the “11-14” anthology. Makes it far cheaper for people who are interested!

AFL: Mackie one question to you. You’ve played in the legendary 80ies punk band Blitz. You was one of the founding members, am I right? Can you tell us a little about your memories with Blitz? Cause I think I’m not the only one who counts Blitz to one of his favorite bands ever!

Mackie: Me and Nidge formed Blitz, We knew Carl, and he new Charlie, so it came together really quickly, we were soon followed by Attak and The Violators, all connected through family and friends. Looking back now it was amazing for 3 bands to all spring up in a small town, never mind release records and get out and gig.happy days, it seems sooo long ago.

AFL: Have you Jake, Morri and Greg played in other bands before?

Jake: I’ve played in a few bands over the years, Kamikaze Sperm, War Coma, Offbeat Heroes, Dangerfields and I still play in hardcore punk band Dead Subverts and write/record a lot of solo stuff (Which will probably never see the light of day!!)

AFL: Which bands and music do you count to your influences?

Jake: I was influenced musically by a lot of the 2nd generation anarcho bands in my forming years, Conflict, Antisect, Crass, Flux of Pink Indians… That’s changed over the years, I’m more into melodic punk stuff these days (Still has to have an edge!) but it still influences a lot of choices ive made in my life up to now.

AFL: What are you doing beside of making music with Epic Problem. Have you steady jobs? What are you making in your spare time?

Jake: Yeah sadly we all have day jobs, from joinery to social work! Whatever spare time I get these days apart from the bands is taken up by running and maintaining classic cars/motorbikes – not the cheapest of habits but certainly not the most destructive, haha!

Jake: Yeah them three for me too! Bishops Green, Social Distortion, Nothington and Pretty Boy Thorson are my artists of the moment though.

My all time favourite album is probably “Mush” by leatherface too – Although it does change more often than I’d like to admit, haha!

AFL: Thanks for taking time for the interview! I’m looking forward of the upcoming tour. Have you any last words?

Cheers to Nico & Subkultra and to you guys for the interview – We’ll see you out there!