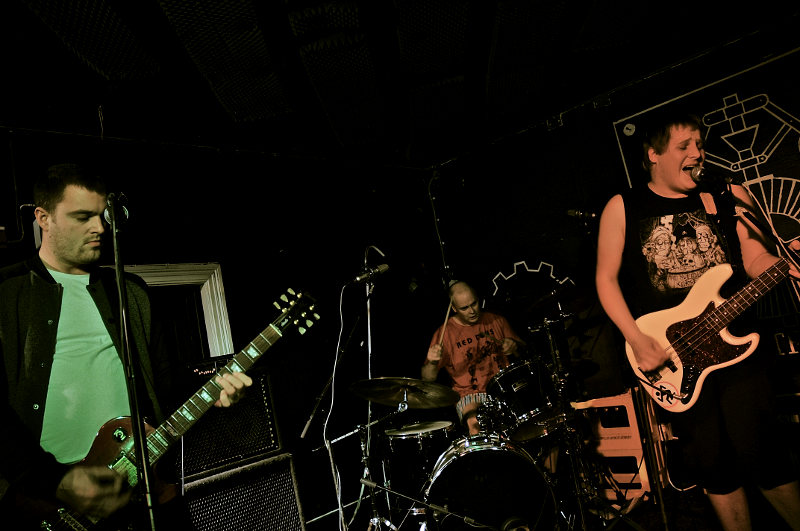 Feedumb is a hardcore-punk band from Norway which founded in the year 2003. For a few weeks the band have released their new album Feeding The Tapeworm and could convince with a cool mix between oldschool hardcore and 90ties punk-rock. All the better that we could talk in an interview to Freedumb.

AFL: Hey there! How are you? Can you briefly introduce yourself for everybody who don’t know you so far?

FRDMB: Hey man! We´re doing great. Just came back from a tour of the west coast in Norway. Long distances driving in the mountains. But it was really great.

Freedumb started in 2003 and is one of the longest living punk bands in Norway together with Göttemia (which we tour with i 2016) and Fork (which we share guitar player). There´s been a lot of ups and downs throughout the year´s and after the release of The Freedumb Curse in 2010 it all came to a grinding halt in 2011. In 2013 Freedumb recruted Kim Trøbråten (FORK) and started working the songs that would become Feeding The Tapeworm.

AFL: You have released your new album “Feeding The Tapeworm” for some weeks. What can the listener expect on it?

FRDMB: Feeding The Tapeworm out newest album with 10 tunes blasting away for 24 minutes. The lyrics are written in both Norwegian and English because that´s the way we roll. Some of the songs dates back to 2006-2007 and some of it is brand new. The sound of the album is a bit more melodic than earlier releases by Freedumb. This is a natural evolution for us. We believe in not repeating ourselves too much and want to push our limits musically.

AFL: What meaning have the album title “Feeding The Tapeworm”?

FRDMB: Feedig The Tapeworm started as an inside joke, because our guitarist was always hungry when we started recording the album, due to reasons unknown. But it’s also a referance to society demanding too much, and giving very little in return.

AFL: Is the album also physical released by a label or just online as download? If yes where can I buy it?

FRDMB: Yeah. We´re waiting for the album these days. Dingleberry Records are distributing it in Germany and you can get a LP from them sometime in april.

AFL: Is your band name Freedumb on the basis of the same titled Suicidal Tendencies Album?

FRDMB: Our former guitarist came with the suggestion for the name Freedumb. I think he saw through his record collection. Maybe it was on a NOFX album he saw a song called Freedumb. The ST album Freedumb came out just a few years before and it was probably a mix of this that made us choose the name.

AFL: What are your main influences? In my opinion your sound a lot after a mix of 80ties US hardcore punk and 90ties skate punk!

FRDMB: Yeah. That´s pretty much sums up our sound, if you put some thrash metal into the mix. Bands we are inspired by in some way: : Bad Religion, The Flatliners, Municipal Waste, Descendents, Leatherface, Poison Idea, So Much Hate, Kafka Prosess, NOFX.

FRDMB: It´s the darker sides of life… We´ve also been working with the photo artist Sookie Sirene who also writes lyrics. She has to contributions on Feeding The Tapeworm «Flatlining» and «Right in front of you». This has worked out great and it´s good to get lyrics from another perspective. There´s at least two new songs with lyrics by Sookie that can make it onto the next Freedumb album.

AFL: Have you plans for a bigger Europe tour this year to promote your new album?

FRDMB: Our plan is to go on longer weekend trips from Wednesday/Thursday -Sunday instead of going on 2-3 week long tours. We want to go to Sweden, Denmark, Finland, Germany, UK and Czech Republic. So you will definitely see us out on the road

So Much Hate – Lies

AFL: Thanks for the interview guys!