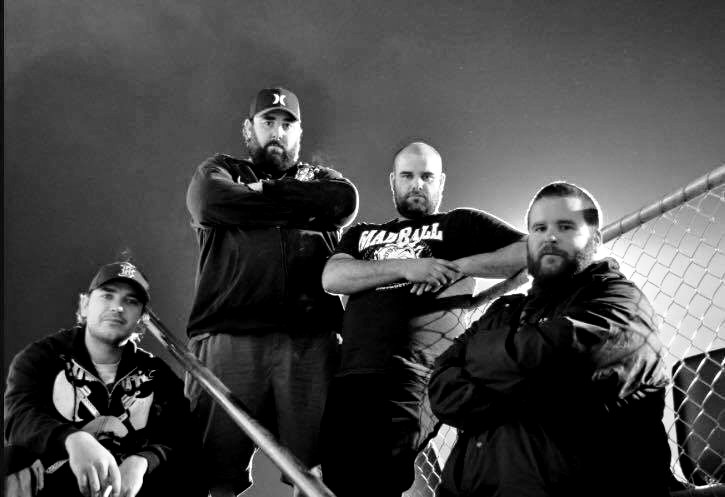 Rust Proof is a hardcore-metal band from Australia which founded in the year 2013. In the end of last Civil Treason on 10-54 Records. We could talk o guitarist Choppaz in an interview about the band and the new record.

AFL: Hey how are you? Firstly thanks for taking time and making the interview? Can you briefly introduce yourself for everybody who don’t know you so far?

Choppaz: I’m really good and no problem mate I don’t mind doing interviews so all good. Who am I hahaha People call me Choppaz I play guitar for Rust Proof I’m a father of 2 girls I’m married and all round nice guy and a asshole all at the same time haha.

AFL: You released your full-length debut Civil Treason in November 2015. How satisfied you’re with the record and how was the feedback you got so far?

Choppaz: Satisfied probably not the word I would use. I’m happy with it but like all musicians I think you look back and are never satisfied. I think that’s what actually keeps me writing is the fact that I always think I could do better. The feedback has been great I haven’t had anyone tell me they don’t like it that’s for sure. It seems to be getting talked about a lot more in Europe than in my own country but I suppose that could be a little expected due to the size differences in scenes. The record is certainly a step in the right direction for the band and what we want to play versus what people want to hear I think we have a good balance.

AFL: Civil Treason was released by 10-54. How came the contact between you and label?

Choppaz: I actually started the label so I got right of passage to tell Peter that my own band is going on it. I actually started it with another band by the name of Crowned Kings. Everyone’s heard of them yeh? And also another mate of mine Brent from Southpaw we come up with the name 1054. I did the initial talks with Demons Run Amok for their release Forked Road and the rest is history.

AFL: What are your main influences? And what inspirited you to making music? Where do you get usually you inspiration for you lyrics?

Choppaz: In the music side the inspiration comes from bands such as Hatebreed, Pantera, Slayer, Crowbar so on and so on but I also like to try do things out of the box a little. We try not to be one style we just jam in a room together with no restrictions and see what happens. Just try to play heavy music. The lyrics well they come from our drummer. He creates ideas and concepts and writes based on those but at the same time keeping it relevant to current issues. We carry punk rock ideals with a metal sound. Civil treason lyrically had a lot of work put into it to keep the concept in tact while still being relevant to everyday people.

AFL: You founded in the year 2013 and could play till today a couple of shows. What was in your opinion the best so far? And why these?

Choppaz: We always like Melbourne shows. It’s with our mates the entire reason why we do this. To be honest I don’t think we have had a bad show yet. It’s all been pretty good in the hood.

AFL: Have you plans touring Europe? Or what are you plans for the near future?

Choppaz: Not Europe as yet. We are looking at heading over to South America with our boys in Worst. We are just about to go in the studio to record 2 tracks for an upcoming split with them. Then the tour trade off begins we go there they come here. As for Europe in the short term never say never.

AFL: What means hardcore for you?

Choppaz: Friendship & enemies, haha! Hardcore to me is an outlet it’s a lifestyle it goes hand in hand with blue collar workers. To me it’s the grit and grime somewhere where everyone is friends but it’s also got that edge of being uncomfortable. It’s very much a love hate relationship that I’ve had for 20 years or so.

Choppaz: Crowned Kings their are my boys along with Southpaw both from Melbourne. New Lamb Of God record is blowing me away right now I’m very much one for traditional style metal. Hardcore releases at the moment probably the new Relentless and I’m very much looking forward to the new Akani.

Inside tip from Australia – Crowned Kings, Southpaw, Ganbaru, Taken by force, Staunch, Overpower, Capital Enemy, Trolley pole, Overlord, Two Faced, To Kill Or Capture, Rebirth, tones more but if you find these you will find the rest.

AFL: Can you tell us a little bit more about the hardcore and punk scene in Australia? Is there a big scene?

Choppaz: Our population compared to the rest of the world is not that big so it’s not overly huge but it’s committed. Standard shows of around 200-300 and nearly everyone is in a band haha. Everyone knows who each other are across all cities it’s a really good community of people and a wide range of people. It still gets caught up in the million different genres but all in all it’s strong and doesn’t look like fading away anytime soon.

Choppaz: I just want to say cheers to everyone who picked up the record from all over the world it means a lot to us. The support has been huge from people we have never met before and it makes me happy to know that worldwide unity still exists. Be well Be safe Peace.

„No Hypocrisy – Staying True“ with Freddy Cricien of MADBALL (HC-Punk-Attitude...