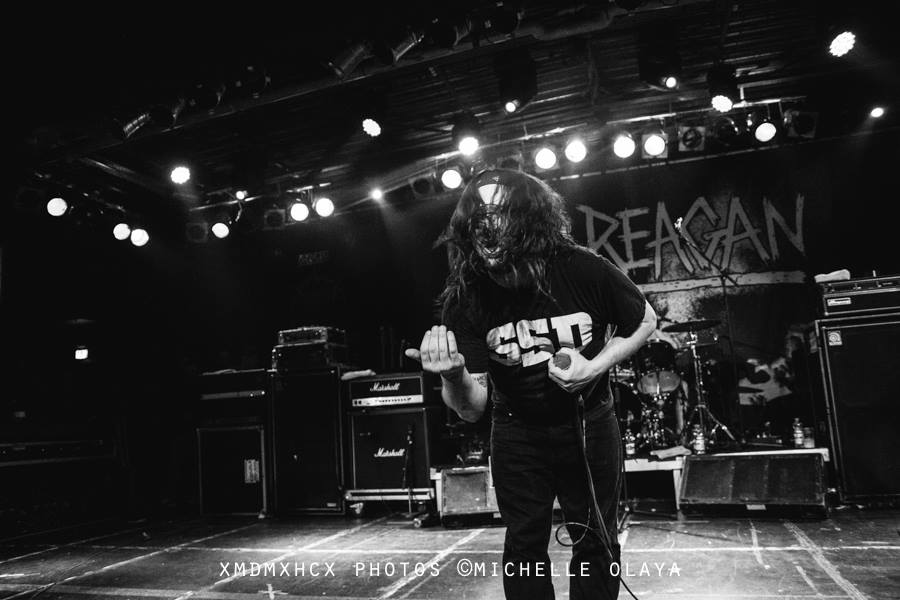 The Persistence Tour 2016 has just ended. On 22nd January Iron Reagan played with Terror, H2O, Ignite, Wisdom In Chains, Twitching Tongues and Risk It! in Wiesbaden, Germany.We were able to talk to Iron Reagan singer Tony and guitrist Phil Landphil Hall about the persistence tour, a new album and more interesting things.

AFL: Hey Tony! Hey Phil! Whats up? Tell us how the tour has gone so far, what were the highlights and were there any letdowns.

Tony: An amazing tour so far, the majority of shows have been in Germany. Phil and I have been touring forever and half of this tour, shows have been in cities that we never fuckin played in before, so that’s awesome, you know and the turn out’s been huge, it’s been fucking really good. The response has been cool. We kind of sound different than the other bands on the tour. The audience has been very respectful and receptive, they have been great.

AFL: Were you familiar with all the other bands you got to play with on this tour? And above all what are your thoughts towards Risk It?

Phil: It’s been good to get to know these bands!

Tony: All the bands get along really well, so it’s been a great experience. It’s been one of the most different tours we have ever done. Risk it is the only band we haven’t heard of before. They are really good!

Phil: Yah, I hadn’t heard of them before this tour but they are really good.

Tony: They work really hard, fucking load the trailer every night. They are here helping us out. It’s a team effort and they are a big part of it. These guys, they fucking Rule!

AFL: Iron Reagan’s music has a more serious tone to it especially lyrically than previous releases form bands that you guys have been in before.

Phil: It’s a combination; we run the gambit lyrically on different topics. We defiantly have a sense of Humor, we’re just guys that like to laugh and have a good time. So it’s always going to come across that way in our music.

Tony: There’s defiantly a message there, way more than with our other bands. Definitely eye opening. A lot of bands have political lyrics, deeper lyrics not only deeper lyrics but social lyrics. We try to have a humorous spin to our lyrics.

AFL Your last Iron Reagan LP came out in 2014. Do you have any new music in the works?

Phil: We are going to keep writing songs, we are already writing. We love making music. It’s one of my favorite parts of being in a band, coming up with new music, new artwork and coming out with new records. It’s always going to be happening.

AFL: So you plan on a new album?

Tony: We want to do another Iron Reagan album. It’s been about a year and a half since the last record came out so now is a good time. So when the tour is over we can sit back and write a little bit.

AFL: With the tour at an end are you looking forward to getting back home or would rather have stayed out on tour longer?

Phil: We’ve been going at it really hard; I would dare say we’ve stayed out on the road pretty much non- stop since we started.

Tony: Yah we have 2 more shows. We had a short break over Christmas but we’ve been out since September. That’s why I sound so hoarse. It’s not a complaint; we’ve had a good time. This is the very end of the album material and the touring cycle. In two weeks we are going to do a couple more shows and then that’s IT! We are going to close up shop for a little bit and writhe some new shit.

AFL: Where should fans go to find further info’s and follow Iron Reagan?

Phil: If you really want to catch up with us; Instagram

AFL: A lot of band member from the other bands on tour with you lead a “straight edge “lifestyle. Has this caused problems for you, have you been ok with it?

Tony: Of course it’s ok! It’s like giving a shit about someone’s diet or something. Who gives a shit? Do what you want to do. I don’t care what you put into your body, do whatever you feel, you live your life.

Phil: Never going to be angry at someone for that.

Tony: As long as you’re not fucking other people up or something why should you care or get worked up on how someone lives their life. There’s way more fucked up shit going on in the world right now to be worked up over that.

Tony: Thanks for the Support. We’ll see us!