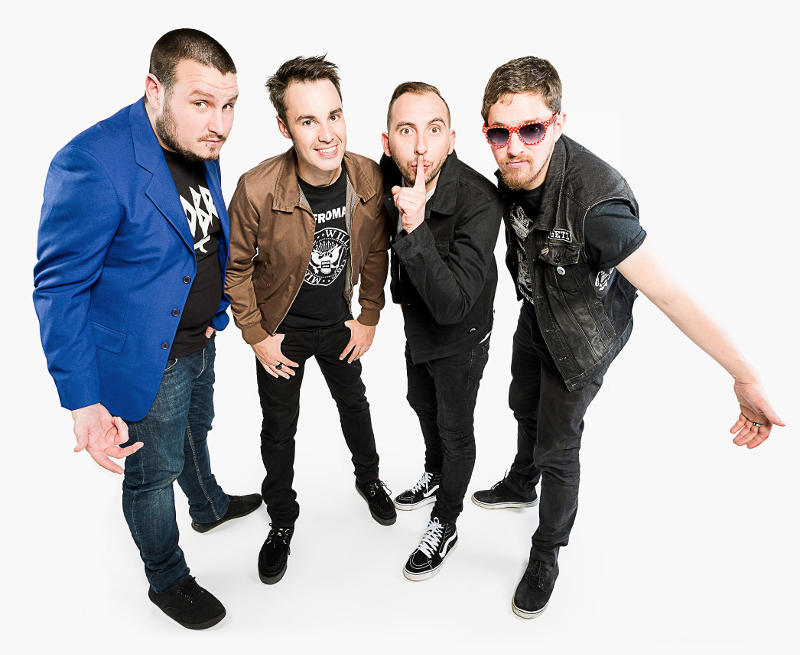 Les 3 Fromages is a french band, which founded 2006. In November they will support the German punk-rock legends WIZO on their German tour. We could talk to the band in an interview about the upcoming tour and ten years Les 3 Fromages.

„The best thing is that they are the ones that contacted us!“

AFL: Hey, how are you? Can you short introduce yourself for everybody who don’t know you LES 3 FROMAGES so far? Since when you play together, have you played before or additionally in other bands and so on!

L3F: Hey! Fine and you? We’re a french band, we play something we like to call „Rock’n’Drôle“, it’s a mixture of rock, pop, punk rock and humor. We’re basically a rock band who sings funny lyrics! We’ve been around since 2006, and we have done about 500 shows, in France, Belgium, Hungary, Switzerland… We’ve played with a lot of amazing bands, and we hope to play with many more!

AFL: What meaning have you band name LES 3 FROMAGES? Has your name any deeper meaning?

Ahah, I’m afraid not, it’s just a funny name we came up with 10 years ago and that is sticking with us!

AFL: Which bands and music do you count to your influences and how would you describe your music? Which three words fit best to LES 3 FROMAGES?

We have a lot of influences, but I think mostly pop-punk bands such as Green Day, The Offspring, Blink 182, Sum 41, MXPX and so on! And for our funny side, we are very much influenced by French comedians.

I think the best 3 words would be „rock“, „friends“, and „fun“. Not very original I know, but very accurate!

AFL: In nearly a month you will go on big Germany tour with the German punk-rock legend WIZO! Is it your first tour in Germany or was you as band there before?

It’s our first time, and we are so excited! To play in Germany, and to play with such an amazing band as WIZO, what an honor!

AFL: Do you know WIZO before? If yes which three songs are your favorite songs of them?

We knew the name but didn’t really know the band, unfortunately they are not so well-known in France! But we were amazed when we listened to them, they are incredible! Every song is a hit!

AFL: On which things, venue or city you’re looking forward most of the upcoming tour?

Honestly, every one of them! We’re so happy to get to play in Germany, every thing, venue or city sounds awesome!

AFL: How came it that you get the support band of WIZO?

The best thing is that they are the ones that contacted us! We couldn’t believe it! We said yes immediately of course, opportunities like that don’t happen very often.

AFL: Have you plans to release new music in the next time?

We’re currently working on our 4th album. It’s a work in progress, there’s no release date yet, but it’s gonna be off the hook, I can tell you that!

AFL: Have you some inside tips from your home? I need to discover some new bands!

Sure! We love bands like Fatals Picards, Elmer Food Beat, Les Wampas who are big influences of ours! You can also check our friends‘ bands Albatross, Sons Of O’Flaherty, Tagada Jones, Darcy, Sordid Ship, Diego Pallavas, Justin(e), Andreas et Nicolas, The Last Moment, The Red Shirts and son on! There are a lot of very good bands in France!

Thank you for your time! We’re looking forward to our tour with WIZO, Germans be ready!

Here you can find the tour dates of WIZO and LES 3 FROMAGES.

Interview with THESE STREETS to „Unfinished Business“