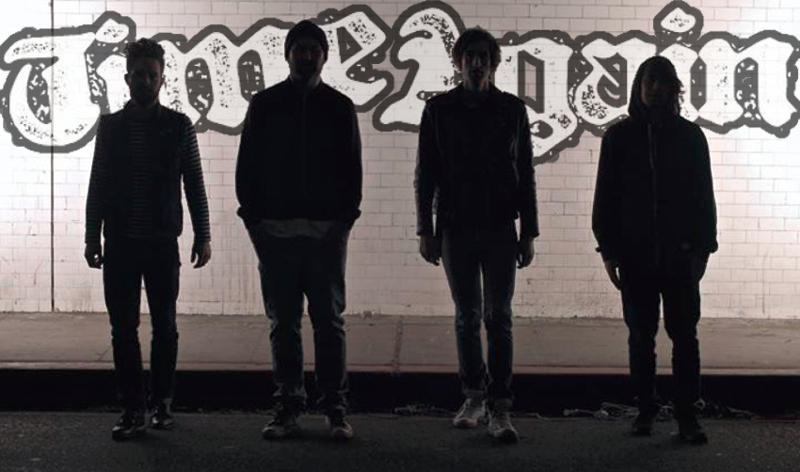 AFL: Hey there! How are you? Firstly thank you for taking time for the interview. I was very happy as I read that TIME AGAIN is back! How does it feel for you to be play again after this long break?

DANIEL DART: First off thank you so much for taking the time to talk with me, it means a lot. After the last few years I am so grateful to be able to come back and return to making music and just doing the things that I love to do. It feels really good to be able to write and sing again, I got so much I want to say, and so many things I want to do and for a long time I wasn’t sure if I would ever get the opportunity again, so it is just a great wonderful feeling.

I really feel like the best has yet to come.

AFL: How is the new band line-up? Daniel you are the only one from the last and former line-up, or? Why do you want to continue with TIME AGAIN and start nothing new?

DANIEL DART: The lineup is all new, but that is something that would always change, realistically the guys that started Time Again were myself and Elijah Reyes. When I got home from prison I got to talk with him and I asked him how he would feel about my continuing where I left off and he gave me his blessing and is happy for me. Elijah is a great dude and I am so appreciative to have someone like that who supports me and allows me to be me. He knows how much Time Again means to me and it is something I built from the ground up, and I want to keep it going, and I really feel like the best has yet to come.

TIME AGAIN frotnman Daniel were charged for 2,5 years 2012. Since the end of 2014 Daniel is be at large. The charges of the conviction were among others kidnapping, carjacking, conspiracy to commit robbery, robbery, street gang allegation. You can find more backgrounds on Daniel’s Blog.

AFL: You released for some days a new video of an old song from the album “DARKER DAYS”. Why you’ve deprive us this cool video so long?

DANIEL DART: Well we actually shot the video ages ago and then I don’t know why it got shelved so to speak. We wanted to get out of our deal with Hellcat Records and during that time a lot of things happened and a lot of wires got crossed, no one is to blame just sometimes things get lost in the shuffle. I am just glad we got to post it finally and grateful for Hellcat Records to give us a shot when no one else would. Nothing but love and respect all around.

AFL: I’ve read on your Facebook-page that you planning a new record! When is the release date and will HELLCAT Records releasing it again how the first two records of TIME AGAIN?

DANIEL DART: We are writing new songs every week right now, I don’t know exactly when it will be done, but we are hoping to post some new stuff in the next month or two, along with some new videos. As for what label will release it, I haven’t really given it any thought yet, after prison I am much more relaxed with life in general and right now I just want to focus on the music and creative side of things, I will worry about the business stuff later.

AFL: Are bands like RANCID, OPERATION IVY or THE CLASH still your main influence, or sound the new songs different from the past releases of TIME AGAIN? How would you describe your music?

DANIEL DART: Those bands will always be influences in my music for sure, but I think so many things have happened to me over the past few years from divorce to prison to having to start over that my major influence is just life in general and how I have really just learned to let things go and not control everything. I think on this record you can expect to hear a lot of different styles and even some acoustic stuff. We had acoustic guitars in prison with us and I want to have some songs on the record that can take the listener to a prison yard when the guys are just sitting there writing and singing songs to just get by everyday and give themselves hope to make it through to the next day, or next year. Music is a really special thing, I think sometimes we all forget how much it helps us in those hard and dark times. I want this record to be really uplifting and something you can listen to and remind yourself that no matter how hard things seem, you can make it through it to the other side.

AFL: How satisfied you are with the album, and what can the listeners expect on it? And the most important question: when can you give us a sample?

DANIEL DART: I am really excited about the new stuff, it ranges all over the place and I am hoping to confuse people a little bit, but it a good way. Hopefully by the end of summer we will start sharing!

AFL: Where does TIME AGAIN usually get its inspiration from? Which themes you’re treaded in on your new record?

DANIEL DART: We are all over the board with stuff on the new material but I think the main underlying theme is strength and perseverance. Overcoming obstacles and refusing to give up.

AFL: Did you play any shows since your „comeback“? If yes how does it feel to be back on stage?

DANIEL DART: I haven’t yet, but we are planning to do some stuff in Los Angeles soon, I look forward to it but at the same time I am in no rush. Things will happen when they are meant to happen and I am okay with that. Just looking forward to getting back up there and singing my heart out. This record means a lot to me, more than anything I have ever done before. And I cant wait to share it.

AFL: I saw you 2007 the first time in Germany on ROCK MY ASS Festival with bands like THE TOY DOLLS, IGNIE, THE BONES and so on. Very cool times! Do you have any plans to coming back to Europe the next month?

DANIEL DART: Yes I remember that festival, great times! Yes we plan on coming back to Europe soon, probably in the early part of 2016, and I can’t wait. The music scene in Europe and Germany as well is so amazing, I have been dreaming about coming back for years and I can’t wait to do it, so be on the lookout for dates! Coming soon!

„The good part is that going to prison is probably the best thing that ever happened to me as crazy as that sounds.“

AFL: With TIME AGAIN you had heights and depths. What was for your personal and musician highlight and defeat Daniel? Daniel you was sentenced to two and a half years in prison 2012. What give you power in these hard times?

DANIEL DART: let’s start with the high points, I think the first time we came to Europe was really magical, it was so surreal to be able to play my music that means so much to me for the world, it still lingers in my mind daily, another great point was touring with The Offspring, a band I grew up on and being able to share the stage with them every night. A dream come true. As far as defeats, I have had a long list of those, that is almost an entire interview in itself, and I guess the lowest point wasn’t going to prison, it was the fact that it took me going to prison to realize how great of a life I had. Sometimes I forget how lucky I really am, and the saddest part is I allowed myself to forget that. The good part is that going to prison is probably the best thing that ever happened to me as crazy as that sounds. But now I am here and can start everyday new, and I just try and focus on the here and now and not get too caught up in the past or the future. Just trying to make it through today.

AFL: What are your favorite bands and records at the moment? Is there any inside tip from LA? For a week I was in LA and I saw many much Punk-Rockers. It seems you have a cool scene there?

DANIEL DART: The scene here is great, we are so lucky because Los Angeles is like a crossroads in the world so we get all sorts of culture and viewpoints at our fingertips. As far as inside tips I would say if you are ever in LA you gotta just get on a bus or train and go somewhere random and explore, you never know what you might find.

Soccer: I won $10 in prison betting on Germany to win the world cup! Awesome!

Drinking Time in CA: Boutique coffee roasters are my favorite.

Religion: No thank you.

DANIEL DART: Coming out of prison I wasn’t sure what I was going to do for work, it was really scary but I got really blessed by having some guys believe in me to help them out so I started my own artist and creative management company DEC Artists and things are going really well. Any month I can pay rent is a great month. Other than work I do a lot of volunteer stuff with prison release programs and justice reform, I really want to change the way the system works, to help the everyday man. That is my main goal today.

DANIEL DART: Just thank you for taking the time to speak to me, it means the world to me and I can’t wait to share the music with you and talk again as I continue my journey. The best is yet to come!