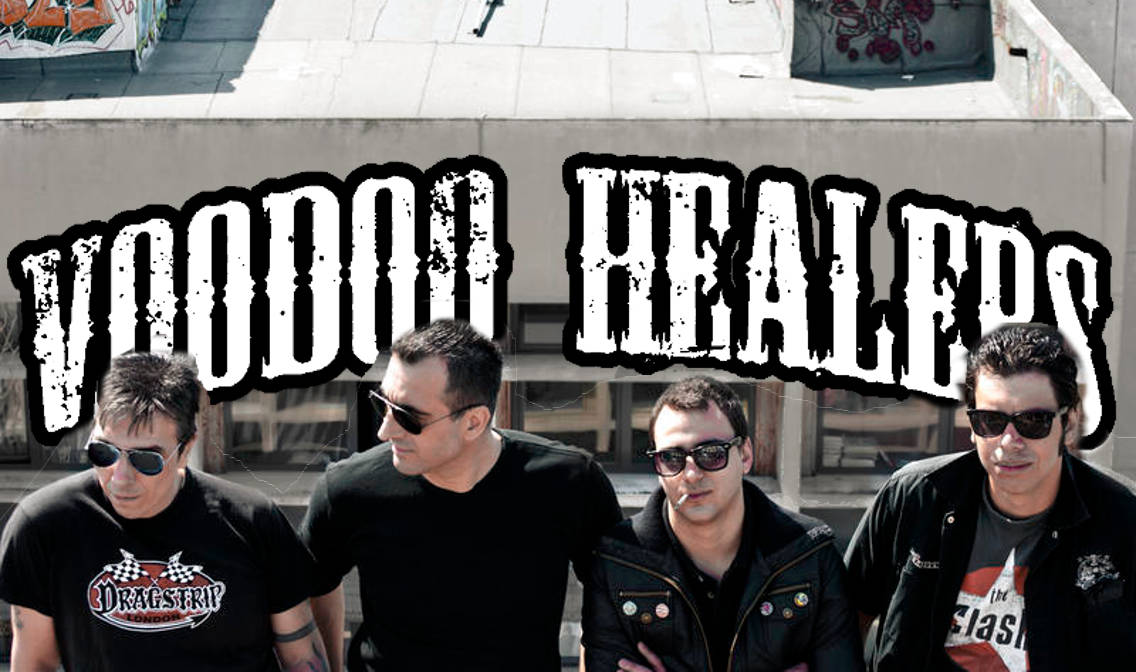 AFL: Hey Guys! How are you? Firstly thank you for taking time for an interview. Please introduce short VOODOO HEALERS. Since when do you make music together? How many members you are and so on?

Hello Simon! Thanks for this interview with the AWAY FROM LIFE Zine. My name is Fast Chris and I’m the vocalist and playing guitar in VOODOO HEALERS. The band started in 2003 with a lot of problems regarding the line up since the idea for a travelling punk rock n roll band coming from Greece targeting the world is not the easiest idea to turn it in reality for many reasons.

We were always 4 members and today’s line up is the same for one year and a half with the drummer jumping in as last after the bands Autumn tour in 2013. Our current line-up is:

AFL: Which bands and music do you countyou to your influences and how would you describe you music?

If I have to put some names….here it is MC5, Ramones, Stooges, Damned, Clash, Dead Boys and many more….and our music is Sweaty and Bloody Punk Rock’n’Roll!!!!

AFL: Your new full length FIRST YOU DREAM AFTER YOU DIE is since October last year available. How satisfied you are with the album, how the album differs from the older VOODOO HEALERS releases and how is the feedback you got so far?

I’m pretty satisfied from the feedback in general and how things turned from last October when the album released, considering the fact we are coming from a small country with no Rock n Roll tradition we are doing it ok.

FIRST YOU DREAM AFTER YOU DIE is more concrete job compering the previous albums with better recording better artwork and marking the idea of the band in a more certain way.

AFL: The first two albums you release by yourself. FIRST YOU DREAM AFTER YOU DIE was released by TRUE TRASH RECORDS from Munich. How came the contact?

Right after the mixing of our material, I realize that finding a label for this album was pretty realistic based on the quality of the songs. I wrote to several labels getting back a really warm feedback but at the same time most of them they were overbooked and asking me to wait for months for a release.

True Trash Rec was ready to do it on time providing also some decent promotion to the release right after and up to the end of 2015 where the vinyl version is coming as well.

AFL: Where else does the band usually get its inspiration from? Which themes you’re on your new album?

The inspiration is the everyday life and the streets i grow up….our tours and everything we are living for, values and ideas.

AFL: You were on big Europe Tour from March on. A tour over 2 months! How was the tour and what do you like on tour life and what not?

This spring 2015 tour was almost 10 weeks, from late March to early June, in 17 Countries and 60 shows…a big thing I must say. Tour was successful in general, we had some problems with an accident but that’s the life on the road. The best for me on tours is this magic way of communication with people never knew before and in few minutes is like you knew them forever. There are also some things I don’t like but I take them as a part of the deal….so no meaning to mention them.

AFL: You already played a couple of shows in Germany. What do you like at Germany and what not and how distinguishing the German visitors from the Greece in your opinion?

We played more than 15 shows in Germany on this tour and many more on our previous tours, I like the fact that there are many places you can play…many venues small or medium size venues where we can really create a blast….What I don’t like is the fact that this whole thing with Rock n Roll turns too much in a fashionable way and a lot of fans and bands too are into that for the outfit and the fashion mainly and not for the music, but that’s the way. Most probably you can’t have the one without the other…Germany is a big market, so everything is on the game.

„But that’s the way; we are giving our hearts and our souls for what we believe and we don’t care.“

AFL: How is the Hardcore and Punk scene in Greece? You get here in Germany even hardly notices and read not much about it. To be honest you are the first Punk-Rock band from Greece I got to know.

There are a lot of bands in Greece but without any plans or wish to move out of the country…and basically was always like that.

It’s too damn hard making it in Europe and in Germany with too many shows for 10 weeks tour! It needs a big heart and strong will to do it. And unfortunately you’ll never hear about it cause we are not from a major country….it’s not so catchy and we don’t have a naked or half naked lady on the band and other reasons of course. But that’s the way; we are giving our hearts and our souls for what we believe and we don’t care.

AFL: What are your favorite bands and records at the moment? Is there any inside tip from Greece?

To be honest i m not following too much the last years releases like I used to do it in the past so I prefer not to name something cause I’m kinda out of good information.

Football: I was always loving this game and following my club for years…no time anymore to do it like before.

With full activity with the band I can’t have a steady job…part time jobs from time to time. The band is the major thing and everything is moving around that

AFL: What are your plans for the near future and where do you see VOODOO HEALERS in 10 years?

The near future looks it will be on the road and in the studios…more touring and more touring, and for sure one more full album and maybe a 7 inch or two in the next couple of years.
10 years after???? What to say, who knows maybe still travelling and playing!!!!

Once again many thanx for the interview Simon, was a pleasure meeting you and talking with you.

Voodoo Healers is a band from the heart, the mind is following, not all the times, sometimes yes sometimes no, it started with an idea for an idea, from a burning heart and for a burning heart.
Hope to see you soon again. All the best!