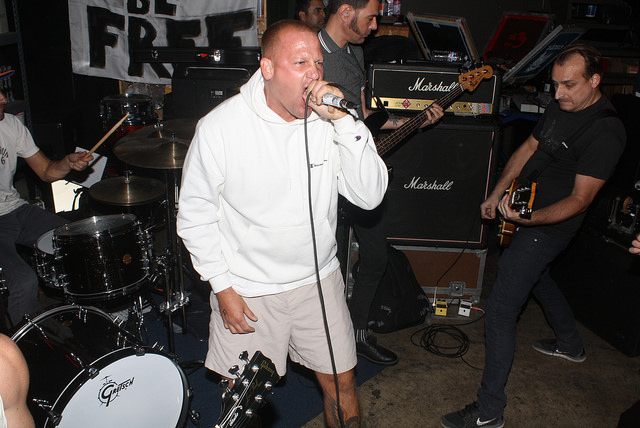 WORLD BE FREE is the new hardcore band that almost everybody is talking about nowadays, but it is not surprise mainly when the band has members of classic hc bands with one of the most charismatic front-man like Scott Vogel singing in a kinda new way than we aren’t used to listen him. Last 5th February was released their debut LP titled ´THE ANTI-CIRCLE´ with REVELATION RECORDS, so I’ve asked some questions to Scott for knowing more about the the band and the record. Enjoy!

AFL: Tell us how came out the idea to start WBF. Has the name of the band something to do with the NBA player?
SV: Yes the band is named after the NBA player World B Free. He has a really cool history and story so if you’re curious check into his past. I have had the idea to do a band in the vein of Turning Point, Dag Nasty and Gorilla Biscuits for years. I listen to those bands all the time and really have a love for that style of hc. For years it was just an idea in the back of my mind but I guess over a year ago I actually put things in motion and now the band is a reality.

AFL: WORLD BE FREE has members of bands like STRIFE, GORILLA BISCUITS, JUDGE, ENVY, and yourself from TERROR. How is that you got together and brought this „all-stars“ band?

SV: It was a pretty simple and organic way for a band to come together. I had the idea to start the band and initial direction. I went to Joe first cause I knew he would be great at writing this style. Joe sent me a song or two and I played them for Andrew as I hang out with him a lot. He said he wanted in. We thought Sammy would be the perfect drummer for this thing and as bonus we knew he lives out in Venice close to us. From there the band was a reality and Sammy was dead set on bringing in Arthur on bass as he never better than anyone what an amazing asset he would be and then yep, here we are – Word Be Free. A new hardcore band. Not a fan of the all star thing or supergroup or any of that. AFL: Your first LP ‘THE ANTI-CIRCLE’ is just now out by REVELATION RECORDS, and there was a demo tape with 2 songs which has had a great feedback. How do you feel about?

SV: Of course, I’m happy people like the record and songs. I hope people are getting an energy from them and can relate to the words. That’s the name of the game, right? That what makes hardcore more than music. I really like the end result. The songs. The lyrics. The recording. The art and the overall finished LP is a really cool thing to me

AFL: I find most of the songs very catchy jams mixing classic hc with melody. Tell us about the lyrics and which one is the one you like most? SV: I was hoping the lyrics would be on the uplifting side. More positive than negative. But we live in an ugly world so within 14 songs some of the evils of life and humanity are expressed. These songs touch on personal freedom. Putting past mistakes behind and moving forward. Letting go of ego and jealousy. Struggles with the bottle and so on. I think the lyrics to the title track are my favorite, ‘The Anti – Circle’ This song is speaking of not allowing yourself to get caught up in the same cycle going round and round day after day and never stepping outside that routine to actually explore and change and grow.

AFL: I know you are big fan of Walter Schreifels, also you love RIVAL SCHOOLS. He is doing a guest vocals in this record. How has been having Walter’s participation?

SV: It’s really cool and makes me smile every time I hear that part. I have a lot of love and respect for Walter and listen to his music all the time. There is really no one else I would rather have as a guest on the record. It’s perfect.

AFL: As I told you last time we met, it is bit strange to listen you singing kinda melodic, way unusual than your previous bands. Were you willing to do something new and not so similar to TERROR?

SV: Yes the whole goal here was to do something totally different than Terror musically and vocally. I know people are very used to me screaming with a very aggressive voice but it was time to explore something fresh and new. It took a little time to find my voice for this style but once I did things came pretty natural and lucky I have heard pretty much nothing but positive feedback.

AFL: One thing that I love of WBF is this “DAG NASTYesque” sound it has some tracks (at least in my opinion). Which bands influenced WBF if you have to name a few? AFL: You guys are gonna be on tour with JUDGE and GIVE, “from oldschool to newschool”. Isn’t that cool? you excited about?

SV: Yes, we have only played one show so far and it was a lot of fun. So playing 8 in a row will be a real test of us finding our footing and seeing who we are as a band. I have played so many shows with Terror so it’s cool to be doing something different with different friends. It’s fresh for me.

AFL: When we will have the pleasure to have WBF in Europe?

SV: Nothing is planned yet but I would think some time in 2016 we’ll play some shows. I hope so at least.

AFL: In the interview on Hoya’s podcast “THE SMOKED WORD” you said that with WBF you wanted a band with songs that “girls can sing along”. What you exactly meant? because with TERROR for example I see always girls singing, dancing and stage diving like champs!

SV: Yes, Terror is very lucky to have lots of females rep for us and give us their energy, you’re right, and that’s pretty important to me. I don’t remember exactly what I said on that podcast of what was in my head but I just want WORLD BE FREE to be more sing along friendly, more positive and less violent than a lot of the shows I see from time to time. Don’t get me wrong I love people going off as hard as possible as long as they aren’t out to hurt other but I just see World Be Free having a different vibe – for dudes and the females as one.

AFL: Name 5 bands you love (or you’re very into) of the hc scene nowadays.

SV: Broken teeth, Risk it, True identity, Take offense, Mizery, Union of faith, Down to nothing, Malfunction. I know that’s more than five and I’ll stop there. Lots of good shit going on now!

AFL: Do you still hate me cause I don’t like Rival Schools?

AFL: Thanks for your time, any last words, just shoot them.

“You say it’s your scene. There’s no fucking way. Think your big shit, we’ve had enough of it. All I hear is how long you’ve been hanging around. You think you have the right to put everybody down. Open your eyes. Take a look around. We gotta to stick together. Not put each other down”
Fuck Your Attitude – RIP Raybeez.

All photos courtesy by www.danrawephotos.com