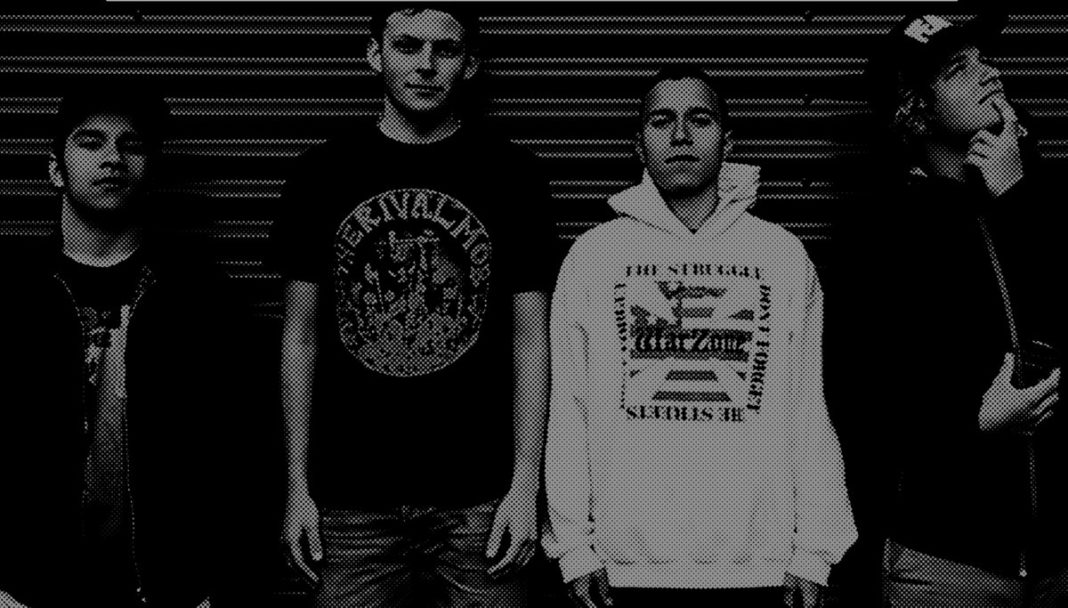 18th November 2016, myself and other members of the AWAY FROM LIFE found ourselves in Eindhoven NL. We came for the Sound of Revolution Festival. We were there a day early to check out the Eindhoven hardcore and punk scene. We ended up in The Jack to visit there a local show with only unknown bands for us.

One of them was AGGRAVATION. Sitting at the bar enjoying a beer, talking with people, I was taken by surprise. A band started playing and I had to do a double take. These guys on stage with their opening riffs threw me back to NYC in 1987. I had to look and see who they were. I thought it might be some old school band playing under a different name. Nope! But dam these guys were a pleasant surprise. Lyrics you could understand, and these guys were tight. Before I knew was in the pit and after the show I met up with front man Walt for an interview.

„live a life of your own“

6 Questions with Walter Huliselan of AGGRAVATION

AFL: Yo Walter, first off all: great show! You released your Demo this past May 2016, but you said that the band has been around a bit longer, and that you played in other bands. When was AGGRAVATION founded, who are the founding members?

Hey Franz. AGGRAVATION was found on New Years Day 2016. My brother (Maurice) and I were traveling back home when we got into a conversation about starting a band together. Our sound would be in the vein of classic acts such as Judge, Leeway and Shelter. A short while after that Maurice and Jouke starting jamming and they would send the recordings to me and Oane, and that’s pretty much sums it the birth of Aggravation.

AFL: What other bands have you been a part of?

We all have been playing music and visiting shows for about 7 to 10 years. Played in tons of bands covering different styles of music, but these are the ones most worth mentioning: Bad Attitude, Suburgent, Born Faced Down, Smashed Out and Pantah.

AFL: Where is AGRAVATION from and what future plans do you have?

Leeuwarden is our hometown. That’s where we live, practice and have wicked vegan/vegetarian cook-offs.  As for our future plans: we just recorded a split 7‘‘ with our buds in 0fight8, which is scheduled to be released next year.  Other than that we are always working on new material and of course playing as much gigs as we can, anywhere. We’re always excited to meet new people and bands.

AFL: What are your musical influences?

As I mentioned earlier we started out playing music in the vein of Leeway, Shelter, Better Than A Thousand; it’s heavy but it still got this melodic twist to it. I guess you can safely say we’re kind of a crossover band. I hear from a lot of people we’ve got this late 80‘s, early 90‘s thing going on. There’s some groovy stuff, some fast short stuff but we also have some songs with a very metallic edge to it. As for the vocals, like you mentioned, I tried to sound very heavy but I felt very limited doing it.

Next to that I enjoy singing and creating melodies, so I guess this works just fine. We get our influences from anywhere really. Obviously we are all fans of hardcore/punk. But we also dig ska, reggae, 80‘s speed metal, Oasis, 90‘s punkrock, Marvin Gaye.. man, there’s too many to name.

AFL: What is the message you are trying to get out with your songs? Am I correct is saying “Human Waste” is about the environment?

Our lyrics deal with personal experiences in life, corruption, injustice… anything that bothers us, gets us wondering or thinking. In the end it‘s all about thinking for yourself. Never rely on someone else, whether it‘s some big mouth politician, salesman, newspaper or whatever. Do some research, get your information from different resources and decide for yourself. Don‘t take anything for granted.

And you are correct, yes. It‘s about the environment and the worthless policies a lot of big money sucking companies practice. These pigs are wasting the planet and her resources that a lot of creatures and humans alike rely on. Let‘s put it like this : at work they‘re dumping their toxic into our drinking water. And when they get back home, they‘ll have a clean hot shower and never regret a thing.

AFL: What ist he best site to follow AGGRAVATION on?

Just check out our Facebook and Bandcamp which you can find through these links:

AFL: Thank you for the interview Walter! Do you have any last words or something to add?

Thank YOU for your interest in Aggravation, it‘s much appreciated. Oh man, there are so many things to be said.. I‘ll keep it short: Keep supporting bands and records tores (they need it!) and live a life of your own!