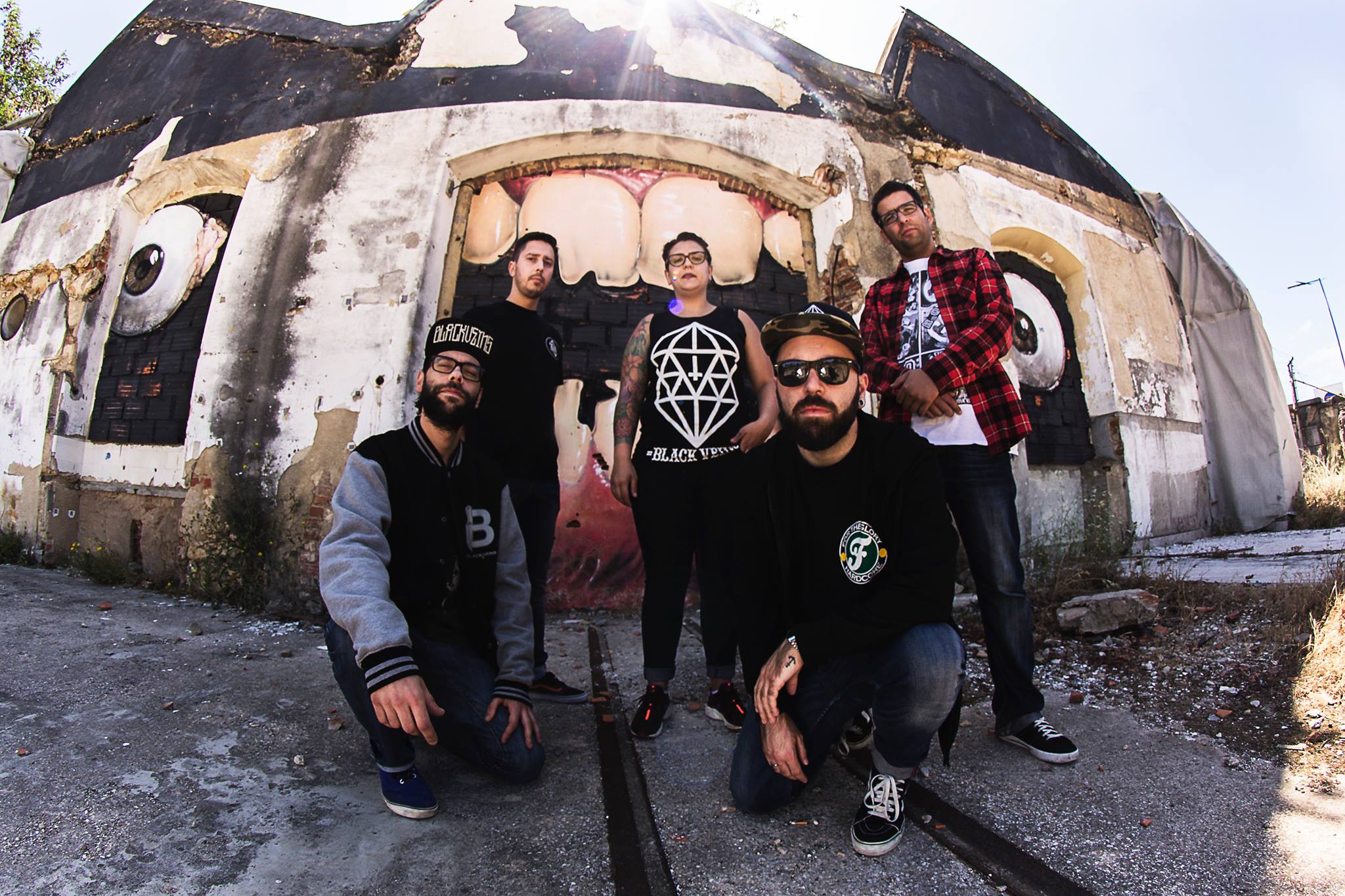 BACKFLIP is a hardcore band from Portuguese capital Lisbon which founded in the year 2008 and have released for a few month their second release called The Brainstorm Vol. 1 via Hellxis Records. We could talk to the band in an interview about their new EP, their big dream and the hardcore scene in their home.

AFL: Hey there! How are you? Firstly thank you for taking time for an interview. Can you short introduce yourself for anybody who don’t know you so far?

BF: Hi there. Thanks for the opportunity to introduce ourselves to who doesn’t know us. Its always great to get involved with the European movement! We are BACKFLIP, a five piece hardcore band from Lisbon, Portugal. We started as a band in 2008, and after changing drummer in 2012, and guitar player in December 2013, today this how we roll! We have a front girl, Inês Oliveira, on drums we have Pedro Conceição, two guitarrists, João Saraiva and Miguel Morais and finally on bass João Vidigal. We are now promoting our second record called THE BRAINSTORM Vol. 1, that came out via Hellxis Records!

AFL: Which bands and music do you count to your influences and how would you describe you music? Which three words fit best to BACKFLIP?

BF: We play energetic hardcore songs with sing-a-long choruses, breakdown passages and melodic riffs. We get our influences from 90’s hardcore, melodic hardcore, punk rock, skate punk,  metalcore, well the list is big hahah but we are inspired by bands such as Comeback Kid, Stick To Your Guns, Madball, Casey jones, A Wilhelm Scream, Propagandhi and many more. I think the three best words that can describe us, is energy, melody and delivery!

AFL: You released your new EP The Brainstorm Vol. 1. Your first release since almost three years. How satisfied you are with the record, how the album differs from your latest releases and what can the listeners expect on it?

BF: Well, we think that “the brainstorm“ is our best record so far. Because we had that much time since the last one, we thought this one through a lot better, also in this 8 years of band we “suffered“ some member changes and we grew quite a bit as persons and as musicians. If they have already listened to our other records they should expect this one to be more concise and mature, it has more elaborated riffs but at same time it becomes somehow simpler.

The Brainstorm Vol. 1 by Backflip

AFL: Where else does the band usually get its inspiration from? Which themes you’re treaded in The Brainstorm Vol.1?

BF: We usually get our inspiration from our daily lifes, routine, society, politics and the problems we all face and try to surpass with positivism which are the main themes for “the brainstorm vol.1“

AFL: On the song Shark Pound you have a guest part from the Stick To Your Guns singer Jesse Barnett. How came it?

BF: It was actualy pretty funny, as it was easy and quick! In 23rd June of 2014 we played with STYG in Lisbon. We all love the band and are influenced by their work so it was set in our minds what we wanted to do: invite Jesse Barnett to feature in one of our songs. Before the show, when we were all together at the backstage, we went to Jesse and very straight forward just asked him if he would do it. He was like “Yeah sure, how do you wanna do it?“ – “Actually, there’s a studio upstairs and we had everything already set there, just in case you said yes“ haha that easy!

AFL: Have you plans to play a tour through Europe the next times?

BF: Yes we want to do an European tour soon, play for more people in different places where we are not that well known yet. It is definitly in our plans.

AFL: Can you tell us a little bit more about the hardcore and punk-rock scene in Portuguese? Is a big scene there? Can you name a few bands besides Devil In Me, Reality Slap, Linebacker and Grankapo? These are the band I already know, haha!

BF: I think the Portuguese hardcore and punk-rock scene is kinda big. There are new kids coming to the shows willing to be a part of it. there are also new bands appearing like Somber rites, Not enough, Selfish, etc. There are also other bands that have been playing for a long time and you guys should listen to such as Shape, Push, For The Glory!

BF: Lately we have been listening to Ignite – “A War Against You“, Being As An Ocean, Stick To Your Guns, The Story So Far – “ The Sotry So Far“,  World Be Free – “Anti Circle”, Blowfuse – “Couch“, Downpresser – “Don’t Need A Reason”, Backtrack and so on!

Straight Edge: A way of life. Choices you make in life, regarding yourself.

Bayern Munchen vs Benfica: Hahahah! A real good game I hope. Two great teams, with amazing history! Hope it all works out good!

Sauerkraut: Actually I had to google it, haha! Didn’t have any idea what it was. Hope we can get the chance to try it when we go play in Germany!

BF: So, yeah, we all work, and now, Inês is getting interested in bio-agriculture, and decided to build a farm haha 🙂 Pedro decided to go to college this year, Vidigal is working as a barber, João is a supervisor at a call center and a sneakers addict (hahaha) and Miguel works in the marketing and advertising industry.

BF: In a near future we want to do an Iberic tour but we are still aiming for the European tour. We want to meet new places, new faces, keep on making music and spread it worldwide.

BF: Again, thank you guys for the opportunity. we like to thank Emanuel Lameira @hellxis records for all his work and support along this ride; Filipe Correia @Blackveins Clothing for the sponsorship; to all our friends and families for their love and to all of you who come to the shows and buy our records you make all of this possible. Cheers!

„With Regret“ the last interview with EXPIRE