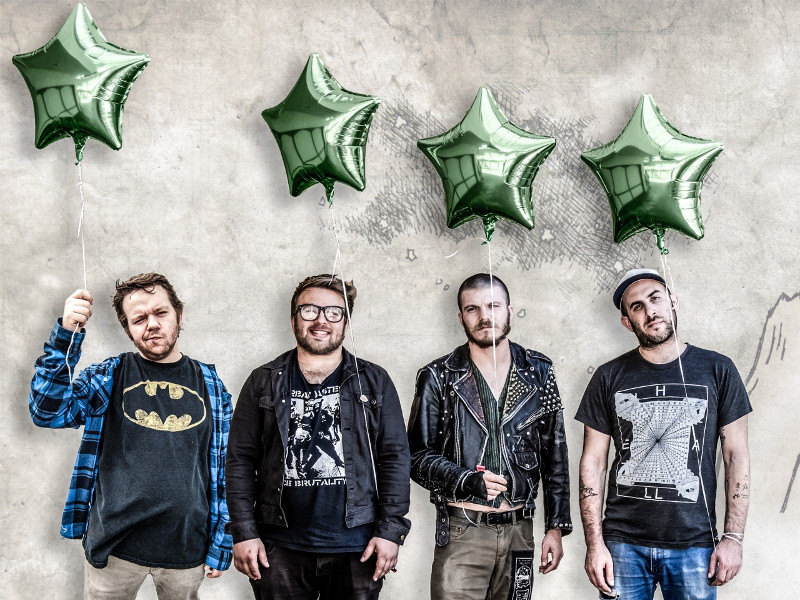 PEARS belong without a doubt to the breakthrough Punk-Rock bands that have come out in the past few years. In 2014 they independently released their first album Go to Prison. They never imagined that a year later the same album would be rereleased by the best known Punk-label Fat Wreck. Now in April 2016 Fat Wreck has released their second LP Green Star. We were able to catch up with PEARS and talk about their new album Green Star, the complications they had concerning their Australian Tour in March and the up coming European tour.

Green Star was labor, labor, labor. Those singular moments were dissected meticulously, rewritten and rearranged until it felt perfect. It was very hard, but I’m happy to say that I love our new record, more than I’ve loved anything that I’ve had a hand in making. This one is our baby.

AFL: You just finished your tour in Australia. Before and while the tour there were some complications. First the most important question: Zach how are you recuperating from your operation? What exactly happened?

Zach: I’m healing decently enough, everything seems to be in the right place. I no longer have any sensation on the outside of my hand from wrist to knuckle, and I’m concerned about the sideways mobility of my pinky finger, but I’m hopeful that it will return. This happened because I jumped in the air and landed punching the stage during our show. It was kinda how iron man lands. I dislocated a knuckle, fractured a bone in my hand, and shattered a carpal. The carpal was the subject of the surgery, I’m a proud owner of a new titanium screw!

AFL: To cover the cost of Zach’s surgery you started a www.gofundme.com campaign that reached the goal within days. Were you surprised by all the support?

Zach: We actually made above our goal in 5 1/2 hours! You know, I was moved tremendously by the rate at which people gave, but I can’t say I’m surprised. We have the best friends and fans in the world. They would do just about anything for us, I think because they know we’d never take advantage and we always give what we do 110%.

AFL: From the original four band members only Jarret and Brian left. Could you play a normal setlist or must you improvise with some “special” songs etc.?

Brian: Zach and myself are the original members, but Jarret has been around basically forever. But assuming you’re referring to what we had to play in Australia, it started off as a set of half songs from our other band, Little Bags, who were all members of haha, the only difference is Zach plays guitar instead of just singing, and then we played some covers, and a couple PEARS songs thay Zach could play bass on until he broke his hand, then we had Chris from Strung Out fill in and play half of our set, then we got Pat from the Decline for the second half of the tour and we went back to playing the normal PEARS set. It was a really crazy adventure to say the least.

AFL: Why couldn’t your original bassist Alex accompany you to Australia?

Zach: By the time we were going to Australia. Alex had already left the band. At that point we had been playing with another bass player, John Komar, for about 2 months. 2 hours before we left, we got a call informing us that John had been lying to us about being on the way to meet us in L.A. to fly to Australia. He had basically lied to us for multiple days about not being able to get on flights and stuff, and in the end I think he just had a meltdown and couldn’t handle what we were doing, and tried to lie a bunch to cover up that he was totally bailing on us. But we made it through the tour just fine with some help from a bunch of great people.

AFL: Aside from all the problems, how did the Australian tour turnout? What were some of the highlights and were the shows well attended?

Brian: The Australian tour was amazing! A once in a lifetime experience. Most bands don’t get to see as much of the country as we got to on the month long tour. And all of the shows were awesome. And all the people in Australia are so nice, we had an absolute blast, and Strung Out are some of our best friends for life now.

AFL: You recently released your album titled GREEN STAR. How does this album compare to your previous release? Are you all happy with the results? Zach: Well, first and foremost: it’s better! The albums were kind of executed with inverse approaches. Go to Prison was a sort of capture of moments, it was written absurdly quickly and given no extra time for overthinking or indulgence, with the moments in which they were written preserved to the T. Green Star was labor, labor, labor. Those singular moments were dissected meticulously, rewritten and rearranged until it felt perfect. It was very hard, but I’m happy to say that I love our new record, more than I’ve loved anything that I’ve had a hand in making. This one is our baby.

AFL: Your new album is again a cool mix of 90’s skate punk and hardcore. How did you develop your sound? What bands influenced you in the process?

Zach: I think we can attribute our sound to actually consciously not striving to be any certain kind of band. When you do that, it kind of makes room for all of your influences to naturally begin to mix up, a sort of melting pot recipe that belongs wholly to the chef. I grew up listening to the bands on Fat and Epitaph in the 90’s, but I’m also a huge Dischord fan. Other influences of mine would be anything that Elliott Smith ever touched, and the magnificent Failure. Also, movies are a huge influence. Kubrick, Nolan, Miyazaki.

AFL: At the moment you’re on tour with Such Gold. How is the tour going so far? After constantly touring, are the trips sometimes a little bit tiering?

Brian: This tour with Such Gold has been super fun so far. They’re awesome dudes, and their band is absolutely amazing, and if you’ve never heard them then stop what you’re doing and go listen to them immediately. But yes, the trips do get super tiring all the time. In fact, I’m super sick right now, laying In the van typing this with my nose running and coughing so much that my chest burns and I can’t hear out of either of my ears and I definitely wish I was back home in my bed, but in a few hours everything will be super rad again once the show starts haha.

AFL: You will be back in Europe soon. I’m personally looking forward to seeing you live. You will play there shows with bands like Dag Nasty, Subhumans, A Wilhelm Scream and Off With Their Heads. You will also play at the Groezrock Festival in Belgium. Which band and which show you are looking forward the most?

Brian: We’re excited for all of the shows we have coming up. Dag Nasty is one of our biggest influences, so that’s amazing, and we’re already really close friends with all the other bands were playing with, it’s kind of going to be like a different school reunion every day on that tour, constantly meeting up with all of our friends we made through touring the last year or 2, it’s going to be great. Also, everyone’s been saying Groezrock is the best day ever, so we’re mostly looking forward to that for sure.

AFL: Seriously. Would you have expected such a quick success and breakthrough when you recorded the songs for Go To Prison? Today your belong to the hottest hardcore punk / punk rock bands ever!

Brian: Well thank you! No we definitely did not expect the kind of reaction that it’s gotten, but we’re definitely not complaining haha. I mean, it’s not like we’re millionaires, or don’t struggle to pay rent, but we definitely have gotten to pass up like multiple years of playing to nobody like a lot of bands have to go through. We definitely work harder than a lot of bands though and I think that has a lot to do with the reception we’ve gotten. People can sense that we’re not here to mess around so they taken us seriously I guess. Or maybe we’re just a total accident… who knows.

„We don’t plan on slowing down at all, any time soon, or ever. Anywhere that will have us we plan on going.“

AFL: You have released Go To Prison multiple times. First you released the record on your own, than Gunner Records (Germany) and Anxious And Angry and finally Fat Wreck. Was is Fat Wreck that wanted to rerelease Go To Prison one more time?

Brian: Yes. When we signed to Fat the original plan was for them to rerelease Go To Prison one last time and give us time to record the new one while giving the old one one last big push, which also drummed up a lot of buzz for the new one leading up to its release.

AFL: How did the contact between you and Fat Wreck come to be?

Zach: Ryan Young! Often our most vocal supporter, and loud yeller in general, I believe we landed on Fat because Ryan turned Mike onto us.

AFL: What plans do you have for the rest of the year? Do you plan to play further tours or will you take things slowly after the shows that are confirmed so far?

Zach: We don’t plan on slowing down at all, any time soon, or ever. We have shows booked up to October, then I get married the middle of that month, then I go on a honeymoon and we start touring again the day I get back from that, and will go most likely until the world explodes. We’ll be in Europe at least twice this year, and the U.S. a bunch, and Canada, hopefully Mexico, hopefully South America soon too. Anywhere that will have us we plan on going.

AFL: What bands are you currently listening to? What is the last band that you’ve see live that blew you away?

Brian: Lately I’ve been listening to mostly the new (unreleased) Direct Hit album, this band Career Suicide, Government Warning, Nails, all kinds of stuff, but the last band that I saw live that really blew me away was definitely Such Gold. I saw them like 6 months ago in New Orleans, and was amazed, and that’s the day we met, and now we’re on tour together and I get to watch them every day and it’s been pretty awesome.

Shout out to Jordan Burns!

BRUTALITY WILL PREVAIL – Interview with Louis to „In Dark Places“