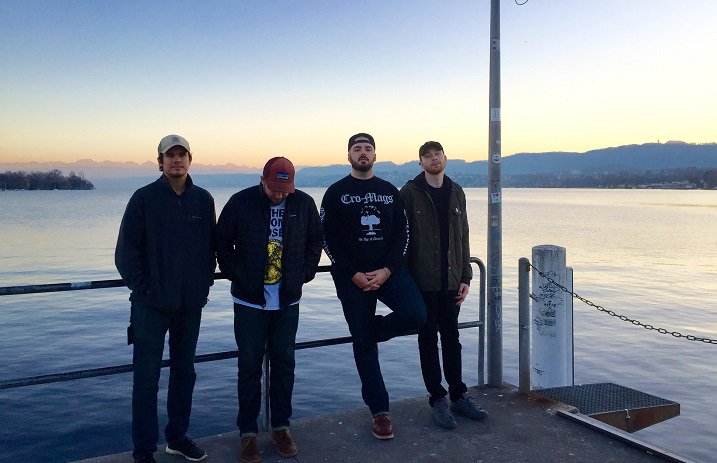 With Regret, a more fitting title can’t be found, for the last album from the band Expire. This is what fans go to read in the beginning of August. The Hardcore combo from Milwaukee is calling it quits in 2017 after eight years.

But before Expire goes into retirement, fans will get their last chance! Expire is coming to Europe in November with Counterparts, Knocked Loose and Landscapes to saying goodbye.

We were able to catch up with Expire guitarist Zack for an interview. Where he talks about the breakup of the band, the upcoming tour and the new last album. So stay tuned right here at AWAY FROM LIFE to find out more!

„Seems like a cold answer, but I’m not sure I’ll miss much.“

Interview with Zack of EXPIRE

AFL: For a few weeks you’ve announced that EXPIRE will break up in spring 2017. What were the backgrounds for this decision?

Zack: Some of the guys are wanting to start new chapters in their lives and instead of becoming a band that sort of fades off, we decided to end it still going hard.

AFL: When and how you come to the decision to quit with EXPIRE?

Zack: We were in the parking lot of a Walgreens somewhere outside of Philly. We were about to drop a tour due to Josh hurting his back and the night before we’d had a big talk about the band that kind of finalized the next day in that parking lot. I laid out the plan on how I thought it should end and everybody was on board.

AFL: In our last interview you already announced a new EXPIRE record for 2016. Now you will release your third and sadly last album WITH REGRET in September. How distinguish your new record from PRETTY LOW and your first record PENDULUM SWINGS in your opinion? Zack: It’s still an Expire record. We didn’t set out to reinvent the band or anything like that, but it’s definitely a big step forward from the last records. Trimmed a lot of fat off songs. We knew when we were recording that it was going to be our last record so we made sure we put out exactly what we wanted. No filler songs.

AFL: How satisfied you’re with the record? Where do you get your inspiration for the songs and which themes you thread? How was the writing process of WITH REGRET?

Zack: I’m extremely satisfied. My favorite song we’ve ever written is on this new album. I can’t really pin point exact inspirations. We pull stuff from all over the place. Some people have said they heard obvious Helmet influence on the record which is cool, they’re a great band.

Writing wise, we wrong more song songs for this than we ever have for an LP. It was the first time we ever did pre production. Marcus and I wrote 11 songs, we recorded them, took them to Europe with us so everyone could hear and so Josh and I could write lyrics. We ended up trashing 6 of those songs and write another 8 songs when we got home. Huge change to how we approached writing compared to pretty low and pendulum swings.

AFL: Before you will break up you will play a couple of tours around the world. Is it a sad feeling to play these shows because you know that it will be the last time you’re playing in any city with EXPIRE? Or are you looking forward?

Zack: I’m looking forward to it. There’s no benefit to being sad or distraught over playing places for the last time. We’re playing as many places as we can so I’m happy with it.

AFL: Is there any country, city or venue that you’re missing on your last tours?

Zack: We aren’t getting back to South East Asia or New Zealand which sucks, but we just couldn’t make it work schedule-wise. I loved both those places when we were there before.

AFL: What will you miss most about EXPIRE?

Zack: Seems like a cold answer, but I’m not sure I’ll miss much. I think we had a good run as a band, made cool friends, played cool shows and got to travel till we started to break haha. I’ll still be traveling a lot so I’m not too bummed on anything.

AFL: If you look backward, what where the highs and what the lows of eight years EXPIRE?

Zack: A lot of my firsts were through Expire. First time overseas, first time doing full US tours, meeting the majority of my friends came through the band. There’s a million personal milestones we accomplished as a band. No need to focus on the lows at all.

AFL: Do you have plans to start a new band together in the near future? Or will you start or focus on other band projects?

Zack: I have another band Stone that will be going full time as soon as Expire is finished.

AFL: There were a lot of hardcore reunions the last years. Could you imagine that EXPIRE will play together sometimes in the future after spring 2017?

Zack: Nope. We had our 15 minute you know. Time to move aside and let the new bands shine.

AFL: Thanks for the interview! Looking forward to see you in Europe in winter! Have you any last words or something to add?

Zack: Praying Europe has ice by the time we get there in December.

TERROR: Interview with Nick Jett about „The 25th Hour“