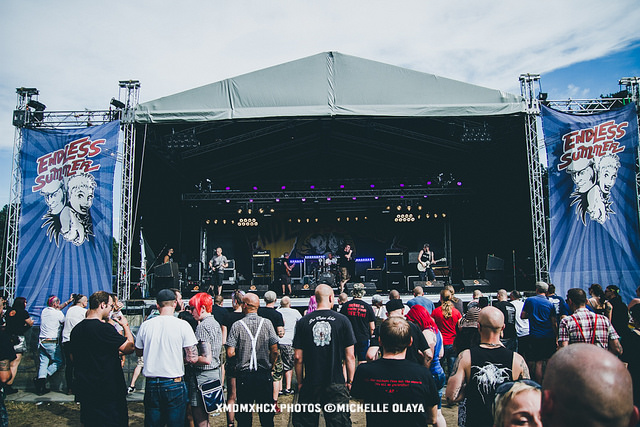 Last weekend 11-12 and 13 August was the 19th edition of ENDLESS SUMMER FESTIVAL in Torgau. Thanks to the festival’s promoter, we got the chance to get a press pass and attend this festival which gathers several bands from Street Punk, Hardcore, Oi! to Ska.

Due some personal issues and a train delay, we arrived late to the festival on the second day, Friday 12th. We started our festival weekend with H2O, the rainy weather was not problem for all people who were expecting this band and enjoy their hc-punk hits. Because the big gap between stage and barricade where most people were standing while singing along, H2O’s front man Toby Morse said: „I hate Barriers!“ and then he jumped that big gap, jumping over the barricade and got into the pit. The kids moshing and pogo dancing around and he kept himself singing that way from the pit around two songs. There were not stage dives, but somehow, some kids made their way jump the barrier across the big gap and sing along some songs during hymns like „WHAT HAPPENED?“. NASTY was the next band which played on the Tent Stage. I got some time for shooting some photos, but due tiredness I did a pause and went to have something to eat and drink.

Next band of the bill: the punk rock revolution of Swedish band THE BABOON SHOW, this band proofs all the time why they are now the bomb on the stage, with their performance full of energy, and an unstoppable front woman like Cecilia. Either the rain stopped her to go crowd surfing through the festival and get a cool ride. People dancing and singing songs like „Me, Myself and I“ or the slow ones like „Tonight“. THE CASUALTIES was the replacement of TERROR, after this band announced to cancel the summer tour due Scott Vogel’s healthy issues. The Punk band from NEW YORK kept the people in the pogo and singing along loud, for keeping warm the crowd who were wanting the NYHC legends AGNOSTIC FRONT, they put the H of HARDCORE to the festival playing several of their classics like „VICTIM IN PAIN“, „THE ELIMINATOR“, „FOR MY FAMILY“ or „GOTTA GO“.

Later the Canadian street punk band BISHOPS GREEN was the bomb in the Tent Stage which was full house with the crowd singing loud songs like  „ALONE“, „ANOTHER DOOR“, „TUMBLING DOWN“. After 7 hours on the road and 6 hours of festival, extreme signs of tiredness shown up in our bodies so that make us able just to first three songs of the german band 1000 LÖWEN UNTER FEINDEN, which gave a nice show in the biref time we checked them out.

Waking up midday on the next day, after getting something to eat and the walking from the downtown to the festival made us to arrive when the band JOKERFACE was playing in the Tent Stage. Unfortunately, we missed bands like SMART ATTITUDE and PUNISHABLE ACT. The sun was shining on Saturday and the vibes of a summer fest were clear on this day, not like the previous day which was rainy and cloudy. On the main stage the spirit of Oi! was brought by the band from Madrid, RUDE PRIDE. These guys have made themselves a name in the scene, and they gave a great show, and we saw people singing songs like „Screaming Oi!“, „We never change“ or „Flag on Fire“ and covering Blitz’s  „New Age“ featuring the bass player of BOOZE & GLORY as guest vocals.

Next under the tent stage was the punk band DWARVES, we tried our best to stay during their set, but gotta be sincere just some photos and we left, and also the crowd was clear not enjoying at all the band which gave a not amused show. JUDGE DREAD MEMORIAL put the party and funny spirit to the festival on the Main Stage, people dancing all the time and good vibes it was possible to see during this band. THE MOVEMENT, another of the replacement bands, gave an awesome show full of energy and unstoppable performance, it is clear what they have that band name, it fits perfect for their show, full of movement and energy.

Back to the main stage OLD FIRM CASUALS, which started their show a bit delayed due to some issues they had, because the airline they flew got their instruments lost, but they could play the show thanks to other bands that lend them the instruments, that way they did not let down the people who were there to see them. The True Spirit of Hardcore was put by NO TURNING BACK, one of favorite bands of the European hc scene, they gave a powerful set putting the kids in the pit to dance hard or die. BOOZE & GLORY were the „new band“ for us, the Street Punk band from London gave an intense show, and people liked it. BUSTER SHUFFLE puts again the crowd in the party mood, with some of their songs and playing some mix of covers of classics of the ska and reggae. Excellent performance.

The most expected bands of the weekend, COCK SPARRER, was the icing on the cake that night. There’s not show what people get bored or tired of this band and 40 years on the stages are proof what they have forged as a band, playing their classics like „DROOGS DON’T RUN“, „WHERE ARE THEY NOW“, „RIOT SQUAD“ and closing with the hymns „WE’RE COMING BACK“ and „ENGLAND BELONGS TO ME“. The last two bands played on the tent stage TOPNOVIL, we missed because we were hungry, but we could see last songs of LOST WARNING’s set, which was a good discover for our band’s list. We can resume that this festival was very cool, the organization did an awesome job. It was able to get food for vegans/vegetarians as well for meat eaters, lot drink for the thirsty people. No fights, not any sign of violence on sight. Even the Security team was friendly and cool guys, and it was cool to see them also enjoying some of the bands playing. The only „bad thing“ in our opinion was the huge gap between stage and barricade, it gave a cold vibe, and stage-divings were missed, but it was good when the vocalists of some bands jumped it and got closer to the crowd. Without doubt, this is a very recommended festival, and we hope to repeat next year! At least it is what my best friend from Barcelona who was with me that weekend told me, first time for us there, and sure ‚We’re coming back‘ next year for the 20th Anniversary!

Check out the complete gallery of this festival here! 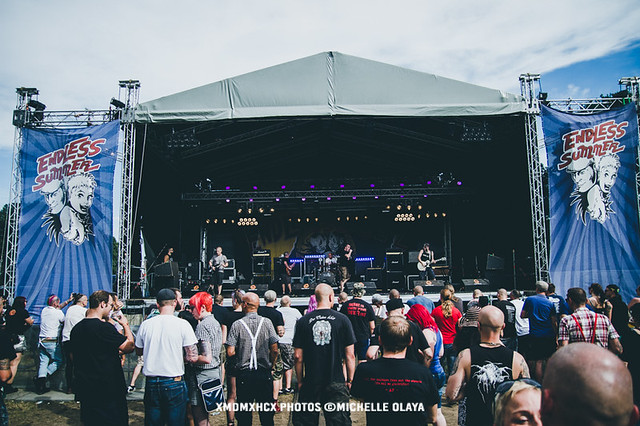