TERROR will release on 28th April their new EP The Walls Will Fall via Triple B and Pure Noise Records. Before they’ll come together with BORN FROM PAIN and HIGHER POWER for some dates to Europe.

We could talk to Terror guitarist Martin Stewart how he gets into hardcore-punk music.

How did you get into hardcore / punk? What was your first contact with it?

Being born & raised in Los Angeles, my older brother & I first heard Bad Religion being played on radio station KROQ back in the early 90’s when we were in middle school. They opened up the door for us listening to all the bands from the area, Pennywise, The Vandals, T.S.O.L., Agent Orange, Litmus Green, Circle Jerks, Black Flag, Suicidal Tendencies, etc. The list goes on forever.

Do you remember the first hardcore / punk show you went to? Is the club still open today?

We started off going to local shows & backyard parties, but the first show in a real club that I remember going to was The Vandals at The Showcase Theater in Corona, CA in ‘93 or so. They unfortunately ended up closing their doors back in 2008.

What is your all-time favorite club or location?

The Showcase Theater for sure. I hated the location because it was just far enough from where we grew up to be inconvenient for us and the area that it was in was pretty dead. That never stopped us from going basically every weekend though. That place really helped shape me into the person that I am today.

Do you remember the first hardcore / punk record you got?

Hmm… If I had to guess, I’d say Bad Religion “Against The Grain” or maybe “Suffer”.

In your opinion what is the perfect hardcore show?

One where I don’t have to play & I just get to kickback and enjoy the show! hahaha.

What is your all-time favorite show you’ve played?

The answer to this question could definitely vary depending on when you ask me, but right now I would say having the opportunity to play on the main stage at With Full Force Festival in Germany. There was something like 20,000 people in front of the stage that weren’t just standing there with their arms crossed watching, they were actually participating in the show and having a great time. It was wild.

Is there a show you missed in the past that still makes you angry that you could not be there?

The California Takeover with Strife, Earth Crisis & Snapcase at The Showcase Theater in ‘96. My brother & I actually had tickets to the show but he caught a really bad cold the day before & wasn’t able to drive that next day.

I really wish I could see The Devil’s Blood one last time. RIP The Voice of Azoth. Dystopia would come in a very close 2nd place.

Is there a person who has influenced you especially in hardcore / punk?

I’d say Ron Martinez from Final Conflict. Not only was he part of a band that played a huge role in my punk experience as a youth, but he was also responsible for booking some of my favorite shows I can remember. Very solid person that is still around & involved today.

What are your top 3 hardcore-punk front man (woman)?

Scott (Vogel) for sure, which might seem kind of weird seeing as I’m in a band with him.  I remember seeing him the first time with Buried Alive back in I think ‘00 and being blown away. They played with Candiria which brings me to my second choice, Carly Coma. I just saw them recently and that man is still on-point as ever. Greg Graffin would take the final position. I always appreciated the intelligent things he has to say.

What is in your opinion the most underrated hardcore-punk band?

Hmmm, I don’t know. Maybe Bloodlet? It seems like a lot of people never understood them. I see that they’re playing soon & I’m really pumped to see that.

Are there some newer bands you could mention?

TONS. Ecostrike, Queensway, Vein, Broken Teeth, Risk It!, Higher Power, Krimewatch, Criminal Instinct… not all of these bands are necessarily “new”, but they’re current & doing what they do very well, imo.

Terror – The Walls Will Fall 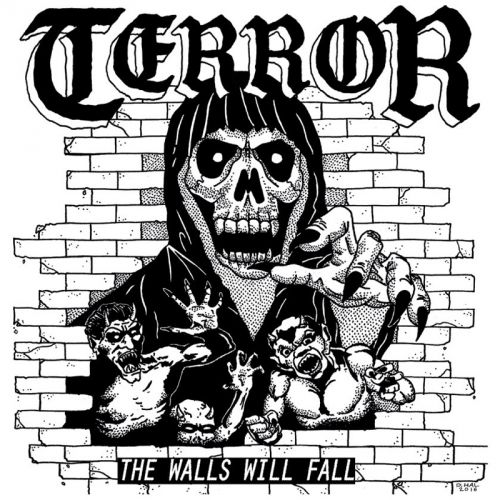 HC History The Beginning Of Everything: #6 with Craig Holloway (COLD...