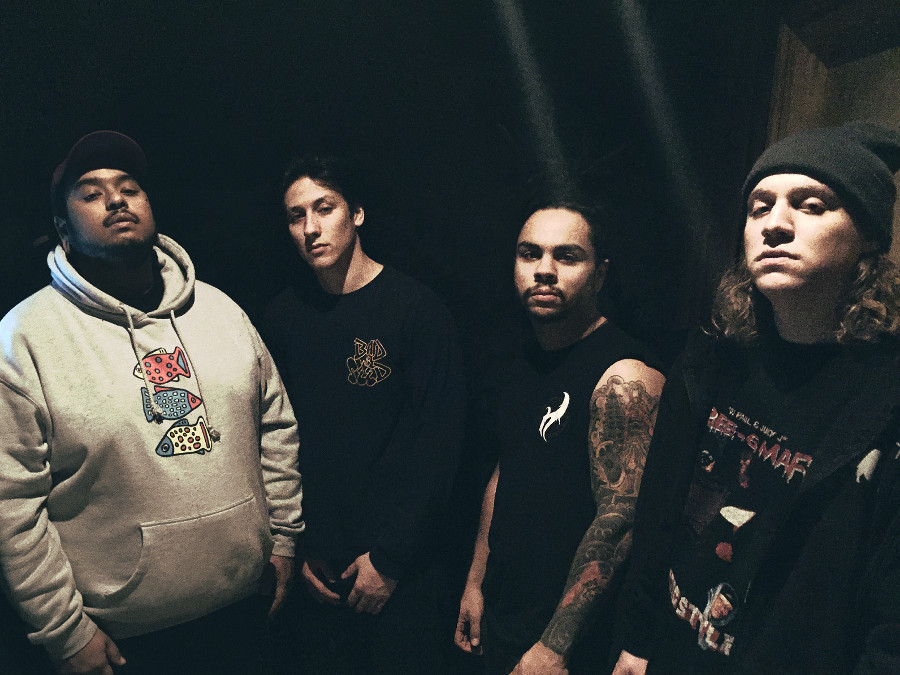 AFL: Hey how are you? My name is Simon and I founded the German Hardcore-Punk zine AWAY FROM LIFE 2015. Thank you for taking time! Could you please introduce EASY MONEY to everybody who don’t know you so far? Have you played in other bands before or have you other bands besides EASY MONEY?

Easy Money: We are good! Troy is vocalist and lyricist in addition to designing and producing much of the aesthetic behind the band. Mookie is guitarist and main songwriter whose role includes recording all string instruments. Petro is drummer/bodyguard & Taylor is bassist/hypeman/pit warrior. Everyone has been in multiple previous bands on local levels. Nothing too serious though.

AFL: I assume you’ve been asked this a hundred times but what ideas stand behind your band name EASY MONEY?

EM: Everyone’s chasing it. It’s the main motivation to wake in the morning for many. We’re all part of the rat-race that is life and it’s in our nature. On a musical level, there’s tons of bands cashing in and using the same sound as everyone else. We just wanted to set ourselves apart from it all. To us and our friends, it’s a lifestyle and attitude, and it sort of contradicts how we write and our intent behind our music.

We don’t do this for „easy money“. We don’t do this to cash in on the trends. We do it for ourselves and the HC scene we grew up in and no one can copy that, no one can copy our roots. We plug every band we can to try and draw more eyes to our scene. Overall it’s an oxymoron of sorts while at the same time being unusually catchy, and familiar. You see the name and think „oh it is Easy“. You see the attitude and know „this is Easy“. You hangout with us and know it all comes easy. Our friend John Rosemonte (@deathbedblues) envisioned the name and it fit well.

AFL: If I listen to you I hear a lot of Metal influences in your hardcore sound. Your music sound also a little bit unique and new to me. What would you say are the main influences of EASY MONEY and how came it that you play this kind of music?

EM: Mookie and Troy have been writing heavy music in different variations together since they were teenagers. Travis and Taylor come from eclectic backgrounds and their input warps the sound to what it is. Overall we just wanted to play dirty street music. We fit in with those who don’t fit in society, and as a group, we like to think our dynamic of misfits creates something fresh. But everything’s been done before. There’s only so many notes to play. We know this. Our main influences stem from a large set of genres.

Widely cited bands like MACHINE HEAD, BIOHAZARD, CRO-MAGS, ALICE IN CHAINS, SEPULTURA and PANTERA influence us. Newer HC bands like TRAPPED UNDER ICE, BAD SEED and COLD WORLD also. But artists like SNOOP, THREE SIX MAFI, & early LIMP BIZKIT/KORN got their place in our sound too.

You probably read that and think „fuck off, too many influences“ but there’s truly no narrowing it down in our sound and we don’t feel the need to.

AFL: Last year you’ve released your debut EP „Midas Touch“. How was the feedback you get to the EP? What themes you are thread in the songs?

EM: The feedback was great. A lot of our friends and family who brought us up in Arizona Hardcore scene showed love from the jump and that propelled us to where we are. We wrote songs with lyrics that touched a few different subjects. From the struggles of living in a police state, to the feelings we experience maybe once in a lifetime when being betrayed by loved ones. It was just real subject matter true to the struggles we was dealing with at the time.

AFL: „Midas Touch“ includes the song „Menace II Society (The Midas Touch)“ to which you’ve released a video. That one makes clear that you’re not a straight edge band, am I right? (haha)

EM: We don’t rock one way or the other. We just do whatever…. and a lot of Kush was being burned in those first few months when that video was filmed… Fuck it! Do what you want, only yourself can be the judge.

AFL: You will release your new EP „Rules Of The Game“ in a few days. How distinguish the new one from „Midas Touch“ in your opinion?

EM: It has better musical composition than “Midas Touch” for sure. Mookie was focused throughout the writing process and we all had a lot of fun building on his structures with our rhythms and flows. It’s truer to the sound we’ve discovered through our live shows and reflects our musical talents more so than “Midas Touch”.

AFL: What special meaning is behind the title „Rules Of The Game“?

EM: It’s sort of a misnomer. There are no set Rules to music or life, or anything. It’s a reminder to all that everyone has free-will and should flex it. We choose to flex it through our style and music and love to watch our work come to fruition. We wrote our own set of rules and goals and chased em down and we hope others do the same after listening to “Rules Of The Game”. You can plan and set goals and life can still fuck you over. We try to be better than that and keep full control over our path, but this record acknowledges that it’s impossible to be fully in control of anything.

AFL: You will release your new EP on BDHW Rec. which will include beside „Rules Of The Game“ also your first EP „Midas Touch“. How cam the contact between you and the label? And why did you decide to release both EASY MONEY EP’s on one release?

EM: Our manager MogLBU fostered the relationship. We decided to press “Midas Touch” for the first time along with the ROTG drop because the 8 songs represent our sound and style so far.

AFL: LOUD & NOISE bring you the first time on European tour in Aprl. What you expect on the tour and one which thing you’re looking forward most?

EM: Expecting lots of good food, hard mosh, loud music and new friends. Absolutely thrilled Martijn is helping us out and that MogLBU has built this large structure for it all. Can’t wait to goon out in every country we visit. Can’t wait to watch GUILT TRIP every night. See you there!

AFL: There are at the moment just a few dates announced. When you will announce the whole tour?

AFL: I’ll give you 2 options, please pick one and give us a one sentence explanation.

AFL: Thanks for the interview. See you in April! Have you any last words or something to add?

STICK TO YOUR GUNS interview with Jesse Barnett