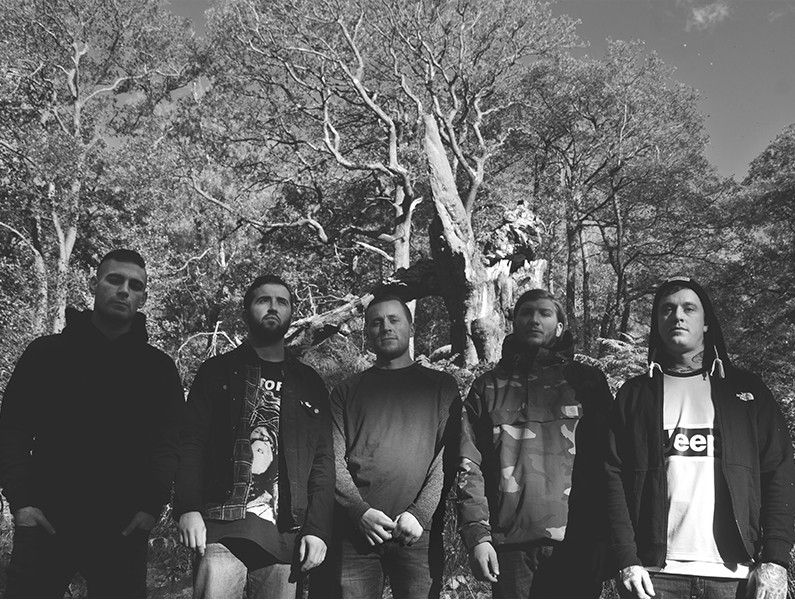 On 24th March BRUTALITY WILL PREVAIL will release their new album „In Dark Places“ on Holy Roar Records. We were able to talk to BWP frontman Louis Gauthier in an interview about the new album and the future plans of the band.

Interview with Brutality Will Prevail

AFL: Hey how are you? I’m Simon of the German punk-rock and hardcore zine AWAY FROM LIFE! On 24th March 2017 you will release your fifth full-length “IN DARK PLACES”. What story is behind the album title and the cover?

Louis: We’ve always been interested in the esoteric and dark imagery. The title and artwork just reflect the underlying themes and the music of the record.

AFL: How would you describe the new album and the new songs? Are there any differences between “IN DARK PLACES” and “SUSPENSION OF CONSCIOUSNESS” and your older releases?

Louis: I feel like with SOC we experimented with a lot of new things and there was a lot of people outside of the band trying to push it in a certain direction. “With In Dark Places”, Mophead rejoined the band and as far as I’m concerned, Mophead and Nick working together is what makes that BWP sound. This record has had more time and effort put into it than anything we’ve ever done before. It’s something I’m truly proud of. Get ready to listen to your favorite album of 2017.

AFL: “IN DARK PLACES” includes 9 new BRUTALITY WILL PREVAIL songs. Which themes you are thread in this songs and where do you get your inspiration for them?

Louis: Most of it is pretty personal but i think they touch on pretty universal themes. There’s a lot of dark imagery and references to death, but i don’t mean it so much in a morbid way. We all die and we all go through suffering, there is no way around that. So there’s absolutely no reason why you should go out and try to achieve anything you want.

AFL: You will be also playing a couple of shows in the next month. Is there any show you’re looking forward most? If I had to guess I would say the tour with NO TURNING BACK and CRUEL HAND, am I right?

Louis: I look forward to all shows we play.

Louis: Just good vibes where everyone is there to got crazy and have fun

AFL: Did you notice the young girl which was hurt on CODE ORANGE shows pretty hard for a few days? How do you see such things? What is your opinion about violent dancing?

Louis: Obviously kicking a girls jaw off is pretty fucked up, but the band can’t be held responsible for that. Violent dancing has always been part of the culture, just don’t bring steel toe capped boots to a show and try not to kick anyone’s head off. If that’s what you wanna do just take kickboxing classes or something.

AFL: What further plans do you have for 2017? Maybe a tour outside of Europe?

Louis: We do things as it suits us. We aren’t gonna go back to doing 3 month tours at a time. But this is a platform for us to see as much of the world as we can. There’s some cool plans coming up but nothing to be announced just yet.

Louis: I’ve pretty much toured and played with every band I ever wanted too. We’ve always been a band that we’ll tour with anyone, doesn’t matter if we’re not into their music. As long you’re cool people that’s all that matters.

Louis: I’m all about those Eternal Sleep and God’s Hate LPs. Disgrace is sick. Haven’t got round to hearing all the new Code Orange but i like what I’ve heard so far. Looking forward to the new AYS record to come out. As for the UK, Broken Teeth and Higher Power are crushing it. Rancour and Firm Standing Law are both new bands to come out recently that you definitely need to check out.

Louis: Come out to a show on the NTB/Cruel Hand tour cause it’s gonna be sick. Peace.

Tour: Brutality Will Prevail, No Turning Back, Cruel Hand

Brutality Will Prevail – In Dark Places ALL FOR NOTHING: Interview with the hardcore band