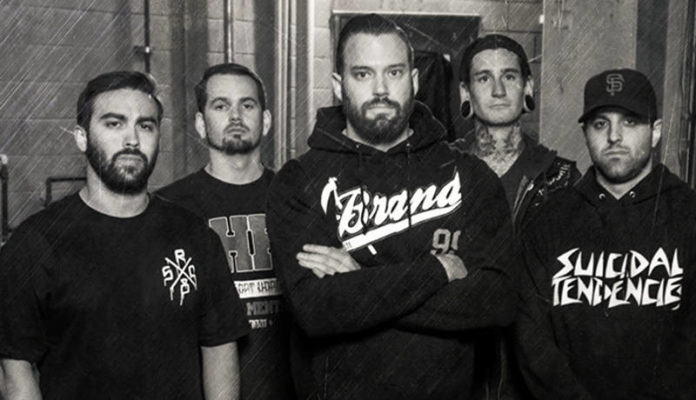 AFL: Hey Guys, it’s more than good to have you back. I suppose you can´t live without Hardcore. What does hardcore means to you and what were the main reasons of your fast comeback? When did you recognize the break comes to an end?

It’s really as simple as we just missed it. We missed the shows, our friends, traveling, and writing music with each other. It probably only took a few months after the final show for everyone to start calling each other like „holy shit we fucked up“. But that’s life right? You fuck up sometimes. Every once in a while you break up with the wrong girl and you have to swallow your pride and try and get her back- that’s basically what happened here. We thought we wanted a break until we got a break, then all we wanted was to be on stage again. There were a lot of changes happening in our personal lives that also lead to that decision to break up but at this point it is what it is and we are just focused on moving forward. It’s the last time we ever break up but probably not the last time we ever fuck up!

AFL: Would you say that you’re still on stage in ten years at this point? If yes, how came the turnaround from your decision to break up last year to now?

Yeah I hope so. I’d love to still be doing this in 10 years. But life is fluid and it’s always changing so I think at this point we are just focused on worrying about now and how to jobs family, careers, and the band all at once again.

AFL: I heard that many people all over the world have travelled to your farewell show in your hometown last year. I’m honestly…I ‘m glad that you’re are back but I would be a little bit angry to see you now just a few miles away from my home town just a few month later. Could you understand it? Have you thought about possible reactions to your comeback?

Personally, if I loved a band enough to travel to the world to see their final show I think I’d be pretty excited to see them a year later a few miles away from me. But that’s just me. Obviously I understand that some people will feel differently and that’s ok. We knew that coming back and we’ve accepted that. We broke up because we felt like it was the right thing to do at the time. We all have jobs and lives and families at home and we wanted to take some time to concentrate on that. Now we’re back. The reaction to our return has been great but if there’s some people upset with it then that’s their right.

We are 5 regular dudes just like anyone else trying to balance life with touring. It’s not always easy. Yeah we fucked up and yeah we’ll probably fuck up again but I’m here because I love the music and I can’t live without it. If people can’t relate to that then oh well.

But, for the record, I think I know (almost) everyone that traveled from Europe to our final show and they were all glad we were back.

AFL: You’ve just a release a new album with the title Welcome to the West Coast II. When have you start writing the record? How much time was between your farewell show last year and the beginning of the songwriting of your new full-length?

We actually had some of these songs before the final show because we had planned on doing a final EP as well but we just ran out of time. One of our guitarists, Evan, and I had also thought about doing a side project and started writing for that around the time of the breakup but everything just sounded like Lionheart so we said fuck it let’s just make this Lionheart because that’s who we are and what we write.

AFL: You’re on tour now. How is the tour with NASTY and GET THE SHOT going so far? I was at the show in Schlachthof Wiesbaden on Thursday and was surprised how many visitors were there!

This entire tour has been a huge surprise- these shows are definitely amazing. This is, by far, the biggest headliner we’ve ever done and co-headlining with our friends in Nasty has been perfect. All of these shows are either selling out or getting upgraded (after selling out) to bigger venues- Wiesbaden being a great example. I think it sold out two smaller rooms before upgrading to Schlachthof. It’s really pretty insane. I’m seriously surprised every night that these rooms are full and everyone is singing the lyrics. It’s crazy shit man.

AFL: Do you enjoy your performances more and more consciously than before?

AFL: You had some line-up changes after your comeback, am I right? If yes can you name it? I saw at the show in Wiesbaden that Stefan of FALLBRAWL joins the line-up o Guitar. Is he now an inherent part of LIONHEART?

It’s actually Walle from Fallbrawl who has been filling in for us on guitar as our other guitar player (Evan) isn’t always able to tour. Walle is definitely on the team and a huge part of helping us stay out there. If he isn’t on stage he’s still with us tour managing and helping out.

AFL: I had read at an interview that you didn´t miss the rat-race backstage during your break. Can you define this rat-race-thing a little more?

By „rat race“ I just meant all the bullshit that goes on behind the scenes. I was over dealing with sketchy record labels and other industry bullshit. A lot of that shit takes the fun out of playing music and we were just over it.

AFL: Could you name your main influences and how would you describe LIONHEART in three words?

Main influences would be Hatebreed, e-Town Concrete, and Blood For Blood. I’d like think we are a pretty solid mix of all of that shit. Three words to describe us? Real. Pissed. Heavy.

AFL: Here are some tags. What are your first thoughts to it?

AFL: Thank you for the interview! Have you any last words or something to add?

Stoked to be back and looking forward to seeing everyone on the road!