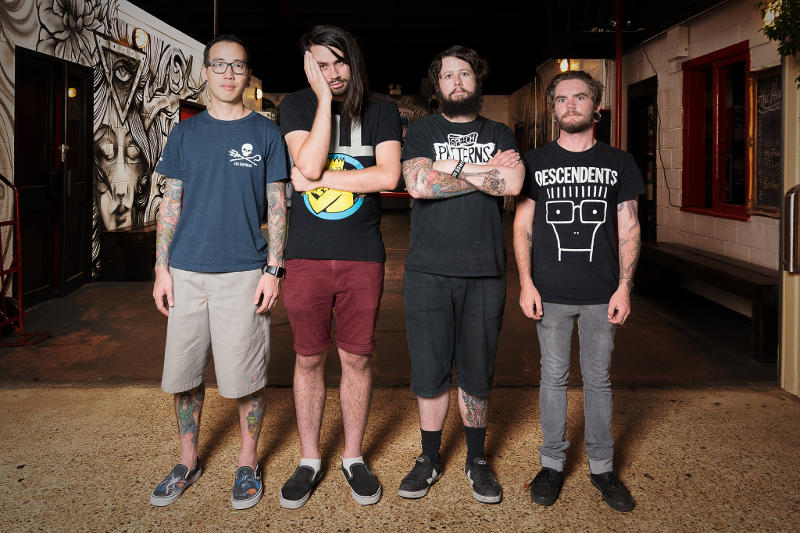 The Decline is currently playing their big tour through Europe. We could talk to the Australian skatepunks in an interview about the band, the tour and a new album.

Interview with The Decline

AFL: Hey there! How are you? Firstly, thank you for taking time for an interview. Can you short introduce yourself for everyone who don’t know THE DECLINE so far?

Hey! We are a punk band from Perth in Western Australia! Last year we released our album RESISTER on Pee Records, Bird Attack Records, Finetunes/Cargo and Bells On Records and started touring pretty heavily! We are in the UK at the moment and heading to Europe soon, and then to the USA.

AFL: Which bands and music do you count to your influences and how would you describe your music? Which three words fit best to THE DECLINE?

Ooooh the three words bit is hard. I’ll get back to you! Our biggest influences differ for all of us, so I’ll just say mine. Probably Descendents, Frenzal Rhomb, Pears, FAIM, Bad Religion and The Matches. Our music is fast but catchy and melodic, while lyrically we try to be funny and not too serious, yet still kinda personal. Those three words. Maybe three-sixty kick flip?

AFL: Your Europe tour started a few days ago! Is it your first time you come to Europe? How is the tour so far?

This is actually our third time in Europe! Our first tour was back in 2013 and we came over last year to play Punk Rock Holiday and Resurrection Fest! I’m expecting rad shows, lots of beer and hanging out in beautiful cities.

AFL: Is there any show, venue or city you’re looking forward especially?

We are doing a small run with The Flatliners from Canada, we are doing a few festivals together and club shows in Nuremberg, Regensburg, Linz and Amsterdam! I’m looking forward to those the most!

AFL: You’ve re-release your second record“Are You Gonna Eat That?“ from the year 2011 for the tour. Have you plans to release in the next times a new record? What are your next plans after the European tour?

I reckon that we will write and record a new album in 2017!  After Europe we will do some cool Australian shows and head to the USA!

AFL: What are your favorite bands and records at the moment? Is there any inside tip from your home?

Descendents – Hypercaffium Spazzinate and State Is Burning – Useless ID are my favourite records at the moment! Some great bands in Australia at the moment are Hyder Seek, Foxtrot, Speech Patterns and The Great Awake!

Pretty stoked about getting across to the mainland this weekend and playing some shows! See you soon!