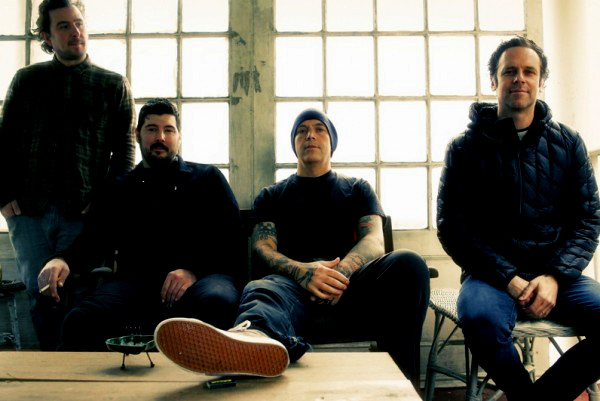 The Bouncing Souls are back with a new record called Simplicity and present stronger than ever. The band are showing one more time that they’re still after nearly 30 years’ band history one of the most important punk bands. We could talk to singer Greg Attonito in an interview about Simplicity, their upcoming European tour in fall and 30 years Bouncing Souls. HERE WE GO!

Interview with Greg Attonito from The Bouncing Souls

AFL: Hey Greg how are you? On 29th July you will release your new album “SIMPLICITY”. I already had the change to listen to the songs. It’s awesome and I really like the record! There is definitely a change between you latest records and “SIMPLICITY”. The songs are a lot shorter and faster. How came the change? In My opinion it’s a little bit “back to the roots” of THE BOUNCING SOULS!

Greg: I’m good! How are you? This is Greg from the Souls. Thanks for having me! A lot of the songs we wrote on our last few records are good songs but we don’t end up playing them live so we made an extra effort to write songs we would want to play live. We knew if we kept the idea for each song simple and short we would probably keep wanting to rock it live.. It really worked!

AFL: How satisfied you’re with the record? Where do you get your ideas and who writes the songs and lyrics?

Greg: We are all really satisfied with the record. The songs are really a collaboration between all the band members. The ideas come from whats going on in our lives, our relationships and how we feel about the world around us. One of us usually presents the original idea for a song but we all usually work on the music and lyrics together to get the finished version.

AFL: “Simplicity” is your already your tenth (!) studio album. Have you sometimes the thoughts that it’s time to stop with BOUNCING SOULS or are you still hungry to playing live and writing music?

Greg: We have never really lost the drive to play live and write music together we just had to slow our pace a little. We really enjoy touring but we also really enjoy our lives at home so we have been working on a balance.

AFL: THE BOUNCING SOULS exist now almost 30 years. Next year you’re celebrate you 30 years’ anniversary. What were the highs and what were the lows? Which times you enjoyed most in the band area? More the times where you were quit unknown and played smaller club shows?

Greg: We are all really proud of what we have accomplished and that we have been an active band all of those years. It’s hard to pinpoint certain moments because they all have value. It was great to play the smaller clubs in the beginning and it was great to play at Wembley Arena the Budokan in Tokyo. Learning how to navigate the low times we experienced ended up making us stronger and gave us perspective for the “high” times. Every experience we have had is very valuable.

AFL: You’ll come back to Europa in fall after a few years break. Do you already look forward the shows? Is there any city or show you’re looking forward most?

AFL: You will go on tour with THE MENZIGERS and ROGER HARVEY. How came the tour bundle? You know each other personally?

Greg: Yes, we are all good friends and have known each other for a long time. We have done a lot of shows and a few tours with THE MEZINGERS and some with ROGER HARVEY in the last few years. We all get along great so we are looking forward to touring together.

AFL: Which three songs you’re like to play live at most? Why these?

Greg: What songs I ‘like’ to play most changes a lot. It’s usually exciting to play new songs. I think we play True Believers every show we do and it always feels great. It feels weird if we don’t. I like Lean on Sheena, Private Radio, Late Bloomer, Gone, the list just keeps going.

AFL: If you could choose a band you can play a show together. Which band would you choose and where would you play the show?

Greg: I would love to play a show with Willie Nelson so I could meet him. It could be anywhere. It would be awesome to meet him.

Greg: I can’t say I really know many new bands. I don’t mean to be negative but I’m not out and about checking out new bands much in the world or online. I enjoy listening to vinyl and discovering music from the past. I feel like there’s so great stuff I keep discovering that isn’t new but its new to me.

AFL: Thanks for taking time for the interview! I’m looking forward of the upcoming tour. Have you any last words?

Greg: I’m looking forward to the tour too!! Thanks for the interview. See ya there!