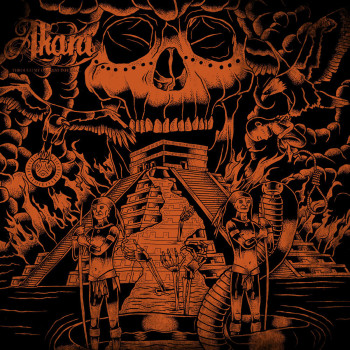 AKANI were founded in 2012 by members of Merauder, At The Gates, Soilwork, The Haunted and Entombed AD and will now release their debut album „Through My Darkest Infernal“ in July via the label Demons Run Amok Entertainment. They continue where they left of after their EP „Santa Muerte“ from 2014 and manage to top that one sound-wise.

As you can expect from all the references, Akani play very hard Hardcore in a New York fashion, with a proper dose of metal. Quite in the same vein as Merauder! The vocals of Merauder legend Jorge Rosado are simply unique and could not fit better to the sound. Angry and with a lot of power. You can feel and hear the band’s tremendous experience and the musical skills in every second of the 14 tracks.

With its dark and heavy sounds „Through My Darkest Infernal“ delivers apocalyptic atmosphere throughout, and never gives the listeners a chance to catch their breath. If you’re into Merauder, Earth Crisis and Hatebreed, you can’t go through the year 2016 without Akani.