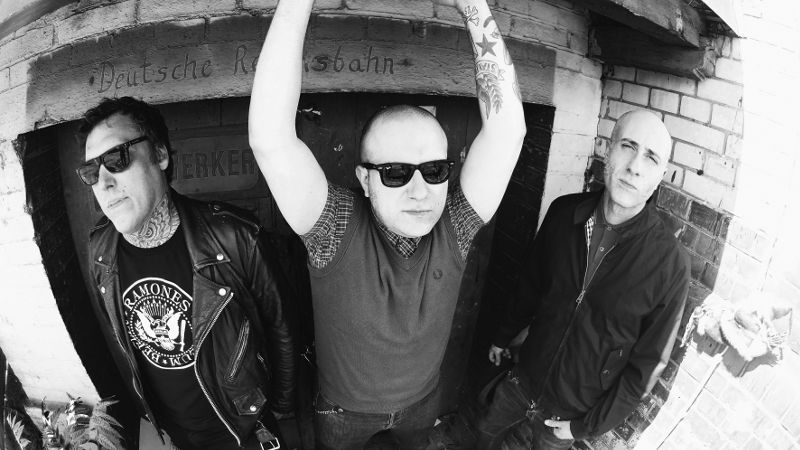 This past summer we received the news that members of the bands The Real McKenzies and The Offenders would be forming a new streetpunk band named Brew 36. All expectations were topped with the clip from the song Take An End.

At the end of November Brew 36 will release their Debut „Our Brew“ on Long Beach Records. Followed by a tour for the band Valerio, Checco (both The Offenders) and Vlad (The Real McKenzies) in Germany.

In an interview with Valerio we were able to find out that Brew 36 is anything other than a side project and that the trio have long term big plans. At the end of the interview you can hear exclusive on AWAY FROM LIFE their new song „Years Are Gone„.

Interview with Valerio of BREW 36

AFL: Hey Valerio are you? You will release your debut OUR BREW on 25th November. How and when came the idea to start BREW 36?

Valerio: Hi there! I would say I’m fine despite the circumstances, the world it’s a mess and I’m not the first or only one saying so! Anyway we are here talking about music right? Brew 36 came out of me, I wanted to play street punk again as I did when I was a kid, I was writing songs that weren’t meant to be played in offbeat, I wanted something more straight, direct…nothing better than a power trio! About band’s members alongside me and Checco, the idea of Troy came out easily. Since first time we met we’ve found out we had lot in common, same views about punk rock, how to play, being on the road, stage and life attitude…time after time we had enough of talking so I just said: “Hey, I’m writing some songs for a new band, do you wanna join in?” – Soo….here we are!

Valerio: Honestly I can’t recall when was the first time we met, I mean, we share the same booking agency since years, hard to say which one was our first show or festival together…i can just say that I’ve started talking with Troy about the idea of forming a new band during a festival here in Germany, guess was in Kronach, around May of last year.

„We are Brew 36 and not The Offenders or The Real McKenzies!“

AFL: How would you describe your music? Would you say it’s a mix between THE REAL MCKENZIES and THE OFFENDERS or more something new? What are your influences?

Valerio: Well, thanks for this question, will help me to make one thing clear: isn’t about our bands, it’s about Brew 36 here! Sure I write music and lyrics but Brew36 don’t play offbeat, ska revival or whatever as well as we don’t play celtic punk, we play OUR BREW! I would say it’s a mix of all we like in punk rock, late 70’s early 80’s british style mixed with early 90’s US style, anthems to singalong! I usually hate to compare bands saying: we sound like this or that, I mean, listen to it and make up your mind.

Valerio: The number 36 it’s taken from the old Kreuzberg postal code, it’s my district since I’ve moved to Berlin years ago, that’s the place where all was born. The word Brew got a double meaning: the first and more obvious it’s the beer reference, since we’re all into it, but means also mixture, and we are a mixture of 2 continents.

AFL: I can imagine it’s hard to find time for a band practice for you. How do you handle that and is the far distance between you a problem? How often do you practice?

Valerio: Well, Checco lives here in Berlin more or less since I do! Vlad (Troy) live in Vancouver, and makes the all thing bit tricky. Well, we usually practice before recording sessions or tour, me and Checco we use to do more here in Berlin and we send Troy some pre-production tracks to work with, in this way we did our first album and sure that’s the only way to let it work due to distances. I guess before we’ll hit the road in December we’re gonna have couple of days where we won’t see any daylight and just lock ourselves in the rehearsal room…but we love it after all, we are looking forward to bring the Brew on tour!

AFL: Which lyrics you threat on OUR BREW?

Valerio: Lyrics wise got plenty of arguments, from historical facts, like our first single “Take an end” that talks about the Victorian Boys, who were considered the “pre-hooligans” in the past century, or even something more personal like “Years are gone” a statement against all those people who point fingers saying things were better during “my times..old times” bullshits! Past it’s important to learn, present matters to live!

Brew 36 it’s a brand new band, not more or less important than the other I have

“Spirit’s still alive” got more or less the same meaning of years are gone, like doesn’t matter who you are, where you come from or how old you might be, if we share the same values living the scene, if we are still here after years, means that the spirit’s alive! I don’t wanna sound too serious anyway, we also have our party tunes as “Pint’s bride” or something in between party and antisocial attitude “Troublemakers crew”. We should also have a laugh sometimes, after all we wanna have fun and guess people wanna have fun too coming to our shows!

AFL: Would you say BREW 36 is more a side or a fun project?

Valerio: Brew 36 it’s a brand new band, not more or less important than the other I have, and I guess I can say more or less the same about my mates. Sure isn’t easy to set a tour up and play as much as we want, but we’re just starting, so let’s begin, let’s kick the ass and let’s see what will happen, we are serious and we wanna do a lot, so far away from side or fun project! Beside, we have fun anyway!

AFL: In December you will go on Germany tour! On which city or venue you’re looking forward most? Have you plans to go also on tour outside Europe?

Valerio: We didn’t have enough time to plan a bigger tour in Europe, also considering the commitments of all of us, but sure we wanna play everywhere, Germany is gonna be the first one cause Long Beach Records still after all a german label and here we’ll get the first push, but we wanna do way more than this, as I said before, it’s just the beginning! About venues and cities…we all have been in mostly all clubs/cities we’re gonna play, we had goodtime everywhere so we hope to have good time also now and we hope that people will enjoy our Brew and will get our passion and dedication to this new band!

AFL: What are the future plans with THE OFFENDERS, Valerio?

Valerio: Also about Offenders there’s something new coming in 2017, we had our last album for our 10th years anniversary and now we are working on new material to celebrate the 10 years of Hooligan Reggae, so stay tuned!

THE OFFENDERS: Interview with the Italy Ska-Punk Band

Valerio: Thanks to you! Remember that the Brew comes to you! Check our tour dates on our facebook page BREW 36 or on Muttis Booking website, and if you really wanna support the band, get our new record and play it loud!!  See you on the road!