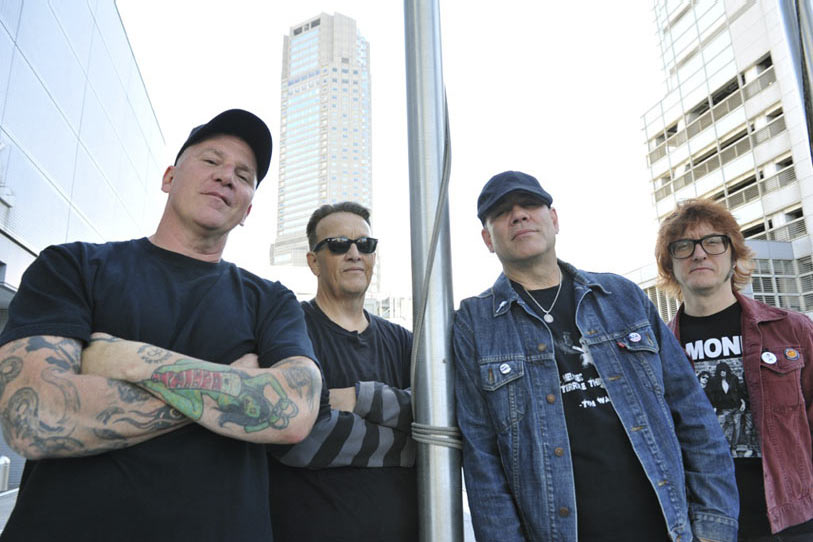 Christopher Joseph Ward better know as C.J. Ramone was bassist of the legendary punk band Ramones from 1989, and played with them before the band called it quits in 1996. The last several years C.J. Ramone has had a new band. He released a new record called American Beauty earlier this year on Fat Wreck records and came out on an huge European tour. We were able to talk to C.J. before his performance at the Krach am Bach, a small DIY-Festival in Germany about his interesting life.

C.J. Ramone: I’m originally from Fresh Meadows, Queens N.Y. but lived in Jamaica and Hollis before moving out to Long Island L.I. is pretty much where I grew up and went to High School. Right after H.S. I went to work for Fairchild Republic and worked on building A-10 aircraft. When I was right out of H.S. and during the time I worked at Fairchild, and i played in bands. The first band I ever did a record with was Guitar Pete’s Axe Attack, a Heavy Metal Band; I was from a total Heavy Metal Background. I played in Bands until I went into the Marine Corps. I got into the Ramones 2 years after I entered the Marines.

AFL: How and why did you become a Ramone?

C.J. Ramone: I had a friend who played drums for Joey’s brother‘s band. He called me up and told me that the Ramones were auditioning Bass players. So I just went down to an open audition where anyone could go. I went and was the first one there. I just got lucky. They called me back and i went to a bunch of auditions over the next couple of weeks before i found out I got the gig.

AFL: When you joined the band, were there difficulties with you making the transition into the band.

C.J. Ramone: No difficulties at all. I was so mission-orientated from being in the Marine Cores, I went at it hard and did the best that I could

AFL: What kind of people were Johnny and Joey and how were they behind the scene?

C.J. Ramone: Joey was very introverted and a weird dude but he was a great guy. He had a great heart, was really into music and loved the Ramones a lot. He was good guy. Jonny was the Boss! Joey and I were friends and Jonny was my mentor and teacher. He was strict and hardcore type; he didn’t take any bull shit. Both of them were important to me in their own way.

AFL: While touring and making music with them what are your fondest memories, and worst?

C.J. Ramone: Best memory, that’s hard because there are so many. The first show was a big one and of course the last one, because i got to play with Lemmy and Dee Dee on stage. Most of my fondest memories are the personal ones, just fucking bullshiting, hanging out with the guys relaxing and kicking back, more than any big rock star moment. More personal shit I guess. The worst Moment was! I got into a bike wreck in 1992 and broke my wrist and had to fuckin go on stage and play with a busted wrist. That’s probably one of the worst ones, and it happened here in Germany. I really don’t have bad memories from then. It was the best time of my life.

AFL: You didn’t play in the Ramones at the same time as Clem (Elvis) and or Richie, are you in contact with them.

C.J. Ramone: I just played a show with Richie in Argentina. I made a record with Clem Burk (Elvis Ramone) a couple of years ago. So I see those guys around once and awhile. Mark and I haven’t had any contact at all, but i still try to get him to come out on tour with me and stuff but… he says publicly that I’m not a real Ramone and that he’s the only real Ramone, whatever that means. It doesn’t really bother me. I just figure that the fans would dig seeing me and Mark play together, so I still ask him.

AFL: Aside from the Ramones you simultaneously founded and played in Los Gusanos, can you tell us a little about Los Gusanos and how you managed time playing in both bands?

C.J. Ramone: Ah, when the Ramones came off tour, I just loved touring so much that I started up another Band. I played Guitar in that band, there was stuff i hadn’t done before. It was a good experience. I had a lot of fun doing it.

AFL: After The Ramones and Los Gusanos you played in Bad Chopper tell us about your role there.

C.J. Ramone: I actually started that band with a friend of mine. We just started up the band for fun and we ended up recording a record and did some touring. I love that record.

AFL: Your solo Carrier as C.J. Ramone continues this year with your new Album American Beauty, after listening to the album; it’s definitely Ramones style music, Perhaps more Rock n Roll than Punk Rock. Can you tell us what it’s all about? And about the tribute song to Tommy?

C.J. Ramone: Yeah I wrote that album in two weeks, I wrote the songs in 2 weeks and recorded it in eleven days. It’s the shortest amount of time i spent on an album. I wanted to do a tribute song for Tommy because he’s the guy who created The Ramones, and deserves to have a song written about him. I felt like it’s my job to do that.

AFL: On the new album a lot of the songs are about I got the girl, I lost the girl. Are they boy meets girl songs or do they relate to your personal life?

C.J. Ramone: Yeah I really like Night Birds, Pears and Mean Jeans a lot. There are a bunch of Fat Wreck bands I like a lot. I think they signed me because I’m a veteran of the Punk Rock community. I know that the guys at the label are Ramones fans. That’s probably why I got on there. I know my music is very different than what Fat Wreck usually puts out.

AFL: Who isn’t a Ramones fan? Thanks for your time C.J.!

Interview with IN OTHER CLIMES from France