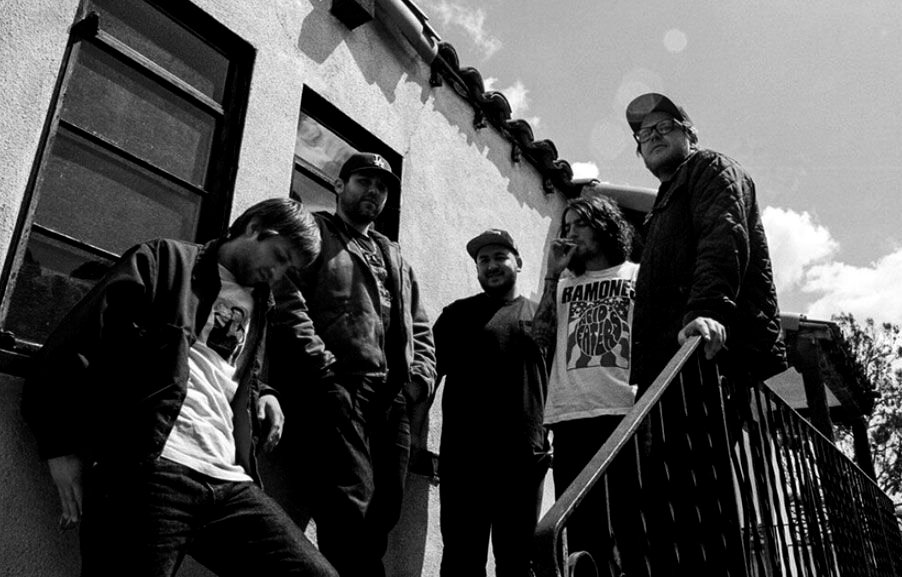 Fury is a Hardcore/Punk band from California USA. They are currently on tour here in Europe. We were able to catch up with them in Wiesbaden at the Schlachthof. Playing the sold out, smaller hall at the Schlachthof in Wiesbaden, they were able to get the crowd moving. For me personally it was the first time I got to see the band preform live. On top of that I haven’t had much exposure to their music. I don’t mean to brag or anything but I’ve been going to Hardcore and Punk shows since 1982, and these guys truly impressed me. Definitely worth the three hour drive to get to the show. I had the opportunity to interview the band after their set. We talked about their current tour, social media and their upcoming album.

P.S.: Thanks and respect on the Schlachthof team for their support for AWAY FROM LIFE.

AFL: Hey how are you? Great to see you here in Germany. I am here with Jeremy, Madison and Alfredo from Fury.

Fury: Hey thanks for having us.

AFL: For our first time readers and for people who are new to your band, give us a run down on where  you guys come from, who plays what instrument and where you started and how long you’ve been together?

Jeremy: Madison plays guitar, Alfredo also plays guitar, Danny plays bass, Alex plays drums and I sing. We are from California mostly from around Orange County. We started in 2013 and our first show was in January 2014.

AFL: Your European tour has just started, with Turnstile and Angel Dust. Can you tell us how a little about how you hooked up with them for this tour?

AFL: Is this the first European tour you have on with Turnstile?

Alfredo: In America we have done two tours. When they come to the West Coast we do a bunch of local shows and festivals. When we are out East they hook us up with shows in their area.

AFL: How many times have you toured Europe?

Madison: This is our third  time in Europe. In America we have done two tours with Turnstile.

Jeremy: This is our third time touring Europe.

AFL: Do you have any expectations for this tour? Is there a certain venue you’re looking forward to playing?

Madison: I don’t know if there are places that we are playing on this tour that we have played before.

Jeremy: I don’t think we are playing any places that we have played before. I liked playing at Cassiopeia in Berlin , that was sick.

Alfredo: I liked playing in Mannheim.

Jeremy : Oh yah that was sick. But as this tour goes I don’t think we are playing any of the same places. Regardless Europe is always super cool and receptive.

AFL: You guys are set to release a new album this fall on Run For Cover Records, is that still on track?

Madison: It’s been crazy, but yes it’s on track.

Alfredo: It’s been a long process, but yeh.

Alfredo: Hopefully it will be out in October.

Jeremy: The release date is set for October and we will hopefully have new music to preview in August. Once the new album is released, we are planning a tour to support it.

AFL: What made you decide to switch to Run For Cover Records from Triple-B Records?

Madison: Sam plays poker with those guys in their headquarters every week. It is like a big family. I don’t feel like we are switching, more like broadening our range. Sam is still a big part of our record and the band too. He is a variant and adds color to the record.

AFL: Does Sam from Triple-B Records have a role in production or some writing?

Madison: No, I wouldn’t say that.

Jeremy: No, he’s just been about us from the beginning. I was the only one who knew Sam when this band started. When the Demo came out he immediately texted me and we went from there.

Madison: He’s been with us for multiple tours and always had our back. If there was anyone who could be considered the sixth member of the band it would be him.

Jeremy: He was the one that Run For Cover kind of talked to about possibly signing us. Sam relayed it to us and then, we didn’t think about tit for a long time . We just want to write a record and then go from there. So we did it and we will go from there . Run For Cover Records offered to put it out. It just made sense, so we went with it.

Alfredo: It just made sense, we didn’t change anything. We are just growing.

AFL: What is the title of your new album going to be and how many songs will it contain?

Alfredo: there are going to be ten songs.

Jeremy: The album is going to contain ten songs and is going to be titled Failed Entertainment. You might be the first one to publish that.

AFL: Tonight you preformed one of your new songs from the upcoming album, titled Vacation. Will you be preforming it and more new material during this tour?

Madison: Yes, we also played another song tonight from the up coming record. We released it about six months ago on a promo tape called, America. I hope we find some time to practice. We kind of know a few of the other new ones. But we need to practice to really get them down.

Alfredo: We’ll get them down. And see how the crowd reacts to them.

AFL: In our last interview we asked how you feel about FB and Twitter and your lack of exposure there. Have your feelings changed since then, and what’s your opinion towards all social media?

Jeremy: No if anything if our feelings towards social media have grown stronger than against it. I do like FB as a fan from music. FB makes finding shows easier and to talk to people and even book shows. For me personally,  the special things I like about bands gets taken away. I also think that individuality is removed. Everyone’s page looks the same; there is censorship, and twitter and Instagram do the same. I kind of like having the mystery of not having those kind of things. Obviously  there is a negative effect that there isn’t going to be lots of exposure, and it makes us harder to find. I would rather have 100 people who are really into us and go to our shows and buy the record there. I don’t think that social media really fits our band. Or what we are about. It’s not some crazy anti-thing; other bands have web sites and whatever; we just don’t.

AFL: In our last interview we asked about bands, people and things that influence your music style. Tonight watching and listening to you play, I could in my opinion, I hear similarities in your music to bands like Dag-Nasty, and early Suicidal Tendencies. You have a bit of an old school sound that’s more slow break beat mosh pit rather than fest chaos circle pit. And I think you were well received; people were stage diving, singing along, and the hall filled up.

FURY: Yah cool. Was a good night got crazy, awesome people were having a good time.

Alfredo: Yes those were influences. I think there is a little of everything in our music and a little for everyone. On the new record I think Oasis was a big influence and that comes across.

Madison: I think that if you are a fan of good well written guitar based music in the last 30-40 years you could hopefully find something in our music.

AFL: What is the best way for fans to keep up the band?

FURY: Follow our record labels they definitely promote everything we do.

Madison: I don’t know man; there has been an idea of perhaps doing a website but I don’t know. In my opinion, bands nowadays aren’t so much worried about the content of the songs as posed to quantity. They post what ever they can just to get quanta.

Alfredo: I think that the internet takes the fun out of finding things out on your own; and like Madison said, bands are more worried about getting likes.

Jeremy: Other bands are worried about getting likes on Instagram and Co. instead of sitting down and writing songs. This band has always been about the music. I mean like we would not be playing it, if we were trying to make money. I’ll be 100% honest with you! If that was the case we would be doing a different kind of band; we would be making beats.

Alfredo: That’s where the money’s at.

Madison: This bands about an organic progression of writing good music and I think I can speak for the entire band when I say that. We have had really great opportunities and are now able to sail all over the world and play those songs. I really don’t think social media is for us but for our labels. They are trying to move units. They do what they have to do and do an amazing job at it. So if you want to like keep track of us follow our labels.

Jeremy: They work hard for us and do a good job. E-Mail us at furyochc@gmail.com,

https://hiveminer.com/Tags/fury%2Cochc, all five of us check it.

Madison: We try to reply, as often as possible.

AFL: Thanks for the interview. Any last words?

Fury: Thanks for interviewing and coming to check us out. The new record will be out in October. We plan on being back in Europe some time after that.

Interview with ALL FOR NOTHING to „Minds Awake / Hearts Alive“