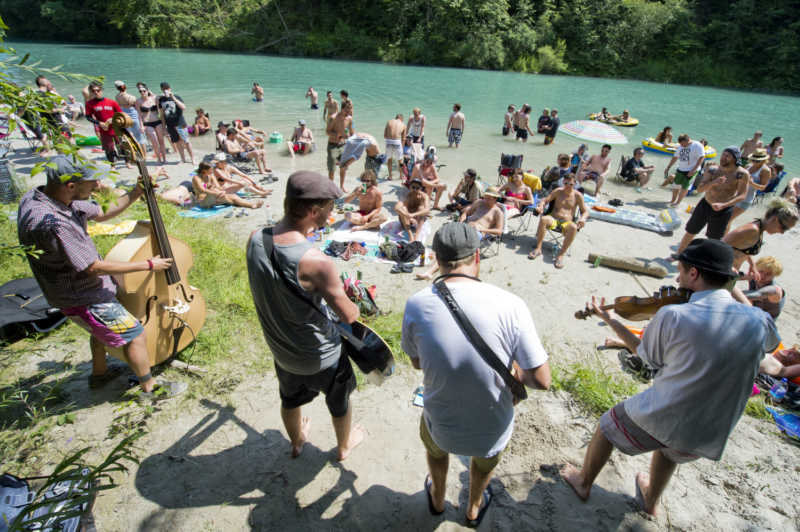 Interview with Punk Rock Holiday organizer Andrej Sevšek to the PRH 1.7 in the slovenien town Tolmin which take part from 07. – 10. August.

Andréj : Well it wasn’t so late in comparison to last year or the years before. The festival was sold out in September, so we took time to build a best possible lineup. We wanted to present the full lineup – all the bands at once, because we feel like the lineup as a whole is what only makes sense for this festival. We didn’t wanna throw a couple headliners first and then the rest as a lot of bands would loose the attention… You have to do this only because you wanna push the presales, but in this case we didn’t have to. Also a lot of bands are still building their tour and wanna wait with the announcement until their tour is build and they are ready to announce. This took a while and also we were struggling with a couple bands that were confirmed, but the date we wanted didn’t fit with their tour schedule, so you always have to make some changes to make the lineup steady from first to last date. 5 days of solid lineup is not an easy job…

Andréj : Yes. Definitely. Last year it was sold out in March, so we figured it could be sold out in November or December, but not this fast. It surprised us big time. Expanding the festival is not an option. The festival is perfect size and we don’t wanna ruin this with making it bigger.

AFL: What do you think makes the PUNK ROCK HOLIDAY so special that the request is so high?

Andréj : Among the amazing location, being small is a great advantage. We wanted to make a festival that is completely different than all the other festival in terms of atmosphere. A completely relaxed festival with friendly people, freindly staff and bands that enjoy playing sweaty club shows without a barricade in front of the stage. That amazing feeling of a 300 people venue being transfered to a 5000 open air show and not loosing it’s charm. I think people also took the atmosphere to the next level. The crowd makes this festival even more special. Because they enjoy every single minute of it.

AFL: Which three bands would you see on PUNK ROCK HOLIDAY that was never guest in Tolmin before?

Andréj : It’s very hard to expose just 3. Refused, Frenzal Rhomb and probably Rancid, but I’ve lost a lot of excitement about them over the years. Like I said before, we’re not building a lineup on a few headliners or exclusive names. We’re trying to book the whole lineup to fit the atmosphere of the festival.

AFL: Is there any band you’re looking forward particularly to see this year?

Andréj : Frank Carter for sure. I’ve seen him killing it at Reading 2 years ago and first thought was how amazing their show would be at PRH. And Pennywise Bro Hymn will probably be the loudest ever. That’s the most frequently played song on the beach stage after parties i guess. And more, but it’s hard to neglect so many bands…

AFL: I extremely celebrate your space comic motifs! Who is responsible for the art and how came the idea for the space style?

Andréj : Aleksandar Živanov from Croatia. He’s doing the artwork for us since 2013 I think… He didn’t really get what we wanted until 2015, when we met in person. I explained what the festival is all about and that mohawk style doesn’t really fit to our festival, so we both came to an understanding that comics style is the thing for us. It’s fun, but can still carry a strong message.

AFL: In your last interview with our writer Gunnar, you said that it would be an idea to organize the PRH twice a year. So more people could enjoy the Festival and nobody has the feeling of a growth of the festival. Do you still have this idea?

Andréj : Yes. Instead of expanding, this would be an idea of keeping it small, but having more people to experience it. But it’s not so easy to do it, because there’s a lot of festivals happening on this location and it’s hard to make it happen. Maybe in 2018 if we sell out so quick again… Maybe…

AFL: In the last edition of the PRH the merchandising of the Descendents was more than noticeable… whether Descendents coffee-mug, posters, shirts,…the face of Milo was omnipresent. Is that still punkrock? What do you think about that?

Andréj : Of course it is punk rock if you do it in the right environment. We didn’t advertise a commercial brand, but one of the greatest punk rock bands which is a perfect example of keeping it real and independent for 40 years…

Andréj : It doesn’t matter. We met with the Bird Attack crew in 2015 and they said, wow, you guys booked 7 of our bands! We said: really? I didn’t know that! I guess we have the same taste in music. We don’t follow labels, we book what we like. That’s it. I guess same goes with Fat Wreck…

AFL: Bird-Attack was streaming the PRH to the internet in the last year. How this collaboration did come about and will there be a stream again this year?

Andréj : This year they will stream for the 3rd year. We met in 2015 or 16 at Groezrock, when they were streaming a Macbeth stage. We had an interview with them and we really clicked. They offered to stream PRH and we said, why not. I think it’s a great thing to spread the word about the festival and also to have people enjoy the festival if they can’t make it here.

AFL: Last year you built up a skate-ramp. Should we bring our boards this year, too?

Of course! We wanted to do this for years, but we didn’t have the budget and nowhere to put it before we moved the entrance to the camping site, so we got an extra free space of asphalt. Last year was a blast! I never thought it would be so busy every day, so we’re building a bigger one this year plus some more additional objects…

AFL: Have you ever thought about revise or abolish your pay card system? There are always voices which do not agree with that system.

Andréj : We never really had any complains. It might took some people a while to understand the new system, but now I think it works perfect.

AFL: In the recent years, most of the biggest bands in Punkrock, Ska and Hardcore were playing at PRH. Are you sometimes afraid that the visitors might get bored? Because now you are at a point where the bands will repeat themselves.

Andréj : All festivals have the same problem. But I think there’s still a lot of bands we didn’t bring to the festival and I also think it is not about the bands so much anymore, but the whole experience of the festival that will never make people bored. There’s no harm in repeating bands if people like them and they deliver an amazing show. I can eat a good pizza every day!