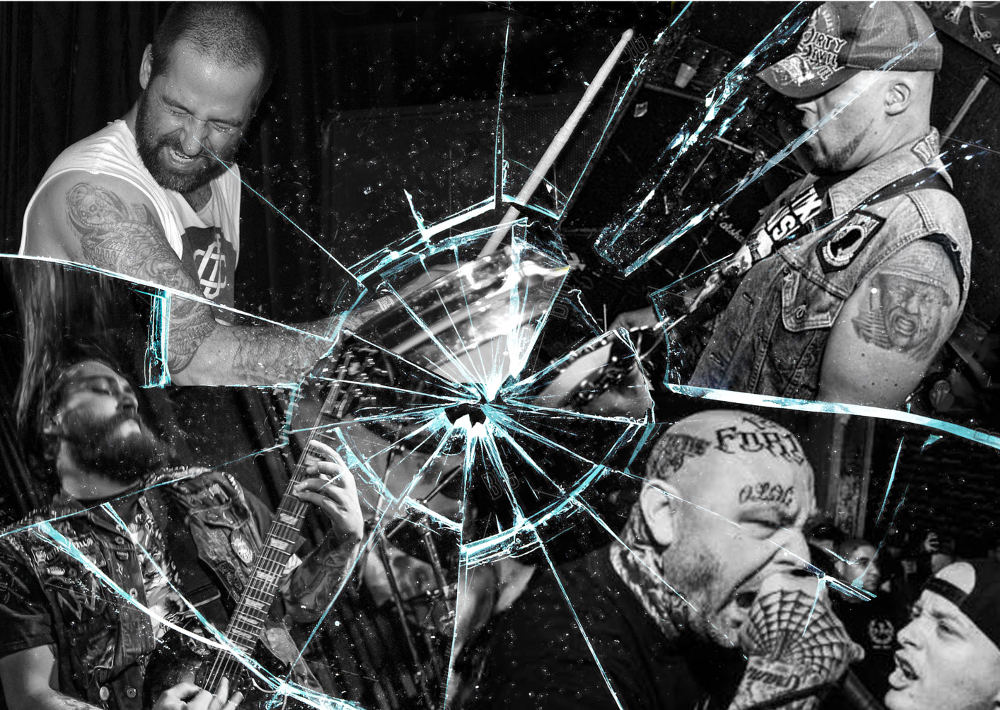 Cold As Life is back! We could talk to bassist Craig Holloway about the European tour in May, the hardcore scene in Detroit and their plans for a new full-length in an interview.

AFL: You’ve just ended your European tour. It was the first COLD AS LIFE tour in Europe since 10 years. Which experience you made?

It was fantastic, we had a great time and it was great to be back. We saw a lot of familiar faces and made a lot of new friends.

AFL: Where there any special highlights or happen any strange stories while the tour?

One of the highlights that come to mind is our show in Sofia, Bulgaria with Vendetta and Rejection at The Grindhouse with the crew from Sofia Hardcore Tattoos. The atmosphere and energy at that show was off the hook! It was definitely a highlight for me.

The strangest story would have to be when we showed up to play in Essen, Germany (Home of the mighty Kreator). We roll up to the bar and we’re greeted by the promoter. He’s helping us unload, giving us a tour of the club and showing us the green room. I go to take a leak and the rest of the band is already helping themselves to beer and snacks. When I come out, they’re loading the gear back out into the parking lot because we were at the wrong club. Fortunately, the bar we were supposed to play was just next door. I later found out a Jimi Hendrix cover band from Seattle was scheduled to play. We eventually made it to the right club, which turned out to be an awesome night because I got to hang out with a lot of really cool friends that night.

AFL: If you compare the tour this year with the tour in the year 2007.What where the difference? Would you say the scene in Europe have changed while the ten years?

Unfortunately, I wasn’t in the band in 2007. I left shortly beforeour singer, Rawn Beauty, died in 1993 and rejoined Cold As Life in2016. As far as I know, Cold As Life played some pretty epic fests like Ieper and Dynamo on the last European tour. This time we played more clubs than festivals but it was pretty epic in it’s own right. We had a blast.

AFL: You will release your new single SUFFER on Demons Run Amok Entertainment in the next weeks. Have you any exact release date and how the two new songs will be released?

Yeah, the songs will be released on August 11, 2017 and can be pre-ordered from Demons Run Amok Entertainment at http://www.demonsrunamok.de/

It’s on colored 7″ vinyl from Demons Run Amok. We sold some CDs while on tour but those were super limited.

AFL: SUFFER is the first COLD AS LIFE release since 2000. Would you say you’re completely back now?

Yes we’re writing a lot of new material and intend on putting out a full length soon. The goal is to do work and play out much more.

AFL: Can you give us some more details about the upcoming full length?

Absolutely. We’re currently working on a full length album and also there are plans to record a live album in the future, too. We’re compiling riffs and flushing out songs. We’re gonna cut a demo and fine tune them before we go into a studio. We’ve accomplished a lot in the past year I think if we stay the course the upcoming year will be just as productive if not more.

Having the right crew who’s willing to put in the time effort Cold As Life deserves.

AFL: Do you remember what bands where the drive for your foundation in 1988? What were your main influences?

Just off the top. Of my head I’d say Agnostic Front and Cro-Mags then Madball, Biohazard and SOIA.

AFL: Could you introduce us the hardcore scene in Detroit? I often read that Detroit is the most dangerous cities in the USA. Would you agree? Is hardcore as dangerous in your home?

The Detroit scene or „Midwest Hardcore“ as it is also known is probably one of the hardest if not the hardest scenes in America. During the 80s, Tesco Vee and Dave Stinson started Touch and Go which was a popular, local fanzine. Touch and Go eventually became a hardcore record label in 1981 before they moved to Chicago and was pretty influential in our scene.

Detroit often gets a bad wrap for being one of the most dangerous cities in America but the crime rate is actually dropping. From what I understand it’s still really high but there are other cities with just as much or more crime than Detroit.

AFL: Have you any inside tip from your home? Which other cool bands come from Detroit!

Seriously, there are too many to name but Negative Approach, Suicide Machines, Freedom, ALD & Heresy stand out for me but if you want to take it old school, I’d have to throw in MC5, Ted Nugent, Stooges, Bob Seger and Alice Cooper, too.

It would have to be an energetic band interacting with an all-ages, energetic crowd without any bouncers or barricades.

AFL: Thanks for the interview. Have you any final words?

Thanks for the interview. I appreciate the opportunity to help spread the word on Cold As Life.

AKANI: Interview to their new album „Through My Darkest Infernal“