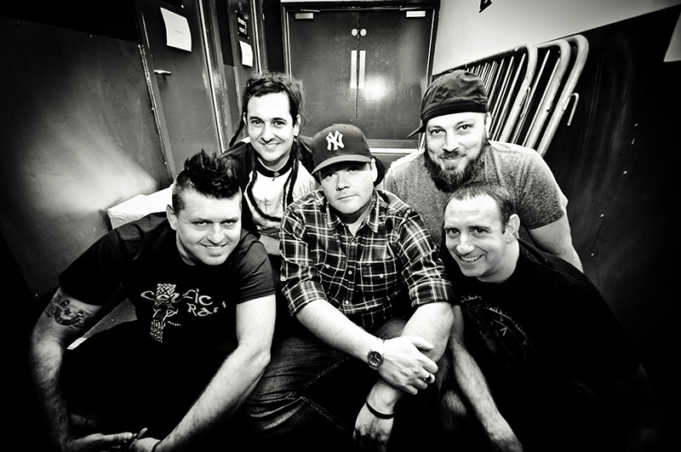 Short Interview with Chris DeMakes Of Less Than Jake to their new EP „Sound The Alarm“, 25 years band histroy and FC St. Pauli.

AFL: Hey how are you? On 3rd February you will release your new EP. It will be your first release on your new label PURE NOISE RECORDS. What were your motivations to move from FAT WRECK to PURE NOISE?

Chris: We have been on so many labels over the years and the owner of pure noise is a huge fan of the band. We figured, why not, let’s go with yet another label.

AFL: Your new EP will have the title “SOUND THE ALARM”. What meaning is behind the title?

Chris: Not sure to be honest. It’s a lyric in the first song of the record, which is called „Call To Arms“. It just sounded cool!

AFL: Almost three years past between “SOUND THE ALARM” and your latest release “SEE THE LIGHT”. Why has it taken so long?

Chris: Have you looked at our touring schedule?

AFL: How would you describe the new EP and the seven new songs? Would you say it’s a typical LESS THAN JAKE release or are there any differences between “SOND THE ALARM” and your older releases?

Chris: It sounds exactly how you expect a Less Than Jake record the sound. Lots of ska, lots of punk.

AFL: I saw you will tour with a big ST. PAULI bus! How came it? Are you supporters of the football club ST. PAULI?

Chris: Yes, we love St. Pauli!!! They wanted to sponsor our tour to coincide with the launch of their merch brand in the US and they have done a fantastic job!

AFL: LESS THAN JAKE making now music since 25 years. Do you still have the same feelings as in your beginnings as musicians, when you are holding a new release in your hands for the first time?

Chris: Highs: 25 years and still going. Lows: I can’t drink like I used to.

AFL: Did you ever think about to stop making music in all these years? And will it give a new full-length of LESS THAN JAKE?

Chris: We won’t ever stop! New album will be worked on this year.

AFL: You have seen the scene change over the decades, how do you see the scene these days and do you miss some things in the scene of today?

Chris: I think the scene is as strong today as it was when we started. Things are great for Less Than Jake in 2017!

Chris: Accept. In Germany. Original line up. Balls To The Wall!

Chris: New Dopamines record rules! Tips from home? Um, don’t do what I do.

AFL: Thanks for the interview. Have you something to add or any last words?

Chris: Thanks to everyone for still supporting us! Cheers.