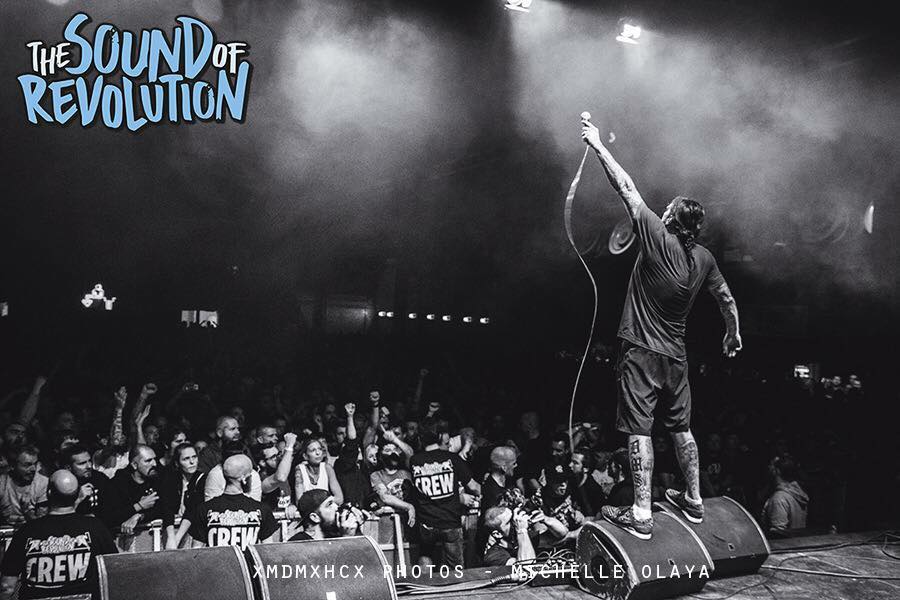 On Saturday the 19th of November in Eindhoven Netherlands, was the hardcore party of the Year. A full house, over 3600 people from all over from the Americas to Australia. People came to see bands like Judge, Ignite, Madball and Cockney Rejects. The day before the concert Sounds of Revolution festival announced the show was sold out. Which comes as no surprise with the 16 band lineup. Where Hardcore lovers were left drooling.  Starting early Saturday afternoon the festival opened with Paddy And The Rats from Hungary. After that the bands came on one after the other between the main stage (Revolution Stage) and the side stage (True Spirit Stage) so that the fans got to see every band, without having to choose who to watch. The True Spirit Stage with its own personal charm, as it was without barricades.

Here are some of our personal highlights from The Sound Of Revolution 2016.

Highlights of The Sound Of Revolution 2016 The high point of the night No Turning Back! Preforming with an intensity above and beyond. Not surprisingly for No Turning Back playing in their home town. Especially while singer Martijn organized The Sound Of Revolution Festival himself. No Turning Back preforming on the True Spirit Stage were in their element. A grandiose show. Classic set list and attitude. Playing the song Together, from their new album No Time To Waste, with a planned release date in February 2017, on Take Control Records.

Respect Martijn! Respect No Turning Back! European Hardcore at it’s best! No Turning Back will go on tour with Cruel Hand coinciding with the album release. You can find the dates here.

Discharge, the creators of the D-Beats! Discharge founded in 1977 belongs to the top world wide influential Hardcore bands. In this past year Discharge released their new album End Of Days. Several songs from the album were in the set list for The Sound Of Revolution. Additionally Discharge played classics like Decontrol, Here Nothing See Nothing, Fight Back and Why. An exceptional performance!

We interviewed singer Jeff Janiak last March about their actual album. You can read about it here.

Discipline, alongside No Turning Back playing a home town show. They released their new album Stake Your Claim last June. With there newest studio album in 11 years (since Downfall of the Working Man) is Discipline truly back! Along with new songs were hits like Everywhere We Go, Young & Reckless and Hooligans Heaven in the set list. Discipline naturally could not leave out Red And White Army, their anthem for their favorite soccer team PSV Eindhoven. Madball is one of the best live bands in our time. Those who have seen Madball live can attest to that. Freddy an Co. proved once again in Eindhoven that they give 100% at every show. The entire house rocked! Flown in to play exclusively at The Sound Of Revolution and worth every cent. Fans were broadsided with the full force of NYHC. Playing the True Spirit Stage, fans took full advantage of the barrier free stage. Stage diving and sing alongside through the entire set. An unforgettable performance. Thank you Judge! The last band of the festival. The British Oi- Legend rocked the house even when singer Jeff Turner’s microphone experienced technical difficulties. The Cockney Rejects were the perfect band to cap off the night of this indoor Festival, in its first year. The Cockney Rejects left with songs like We Are The Firm, Oi! Oi!Oi!, l’m Forever, Blowing Bubbles, War On The Terraces and so on no hit out.

Along with the already mentioned bands the rest put on fantastic performances. The bands Coldburn  and World Eater  playing on the True Spirit Stage were something to see, a great Hardcore show. On the main stage Life Of Agony, Ignite, Angel Crew and Strength Approach did not disappoint.

The Sounds Of Revolution 2017

Is already set for the 4th of November 2017, and Bands are already on board. We’ll keep you updated.

Report by Simon, translated by Franz

HC History The Beginning Of Everything: #4 with Martin Stewart (Terror)